Go West!  To the Scenic City of Pittsburgh Pennsylvania 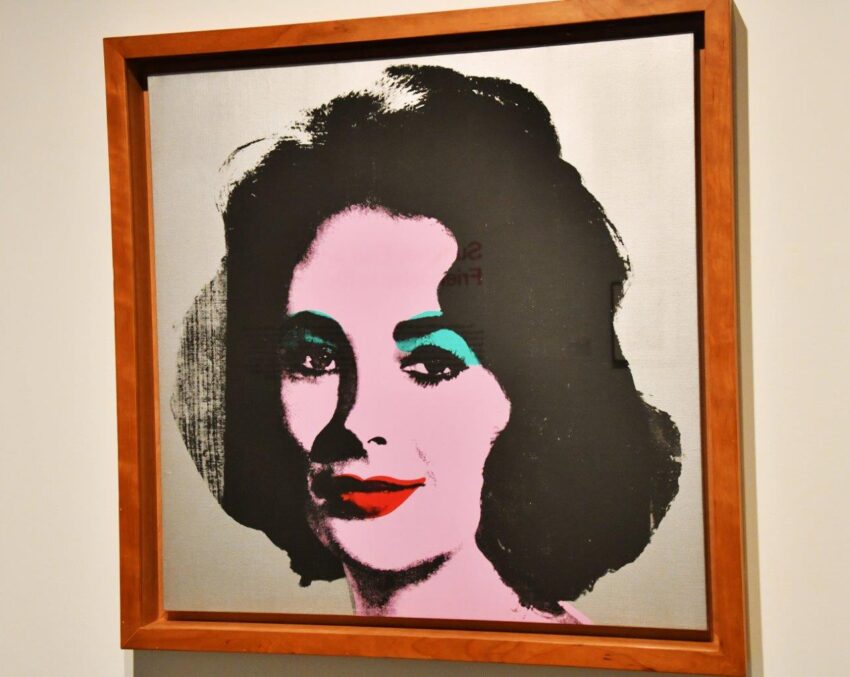 Elizabeth Taylor painting by Andy Warhol, who was born and raised in Pittsburgh.

Pittsburgh is located on the western end of Pennsylvania–It is the most western city of the northeast United States. It is known as the “City of Bridges.”

Local guide books like to point out that at 466 bridges, there are more here in Pittsburgh than in Venice.

Pittsburgh is a scenic-looking city. Its downtown ends in a point where the meeting of the Allegheny and Monongahela River forms the Ohio River.

To get the perfect view of the entire city, take the fun Duquesne Incline funicular to the top of Mt. Washington. 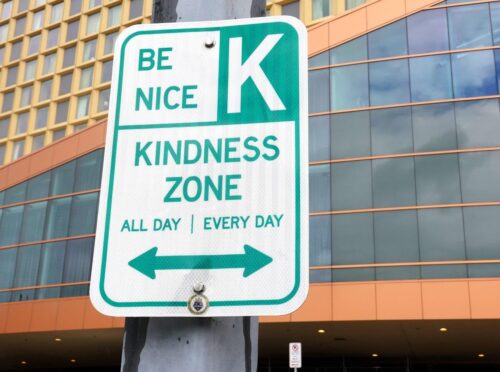 Be Nice Street Sign in respect to Mr. Rogers

For a good introduction to Pittsburgh book the Best of the Burgh (walking) Tour.  Being interested in architecture and history, our guide Rachel spent two hours and two miles focusing on those topics.

During our tour, we stopped on different street corners to view historical landmarks and to admire the unique features of both new and older buildings.

We also went inside a few places for a peek at what made them special.

At the former United States Steel Tower, Rachel spent an extra few minutes discussing the steel columns on the outside of the building. (We also learned that during its weathering, rust dust was all over the streets around it) 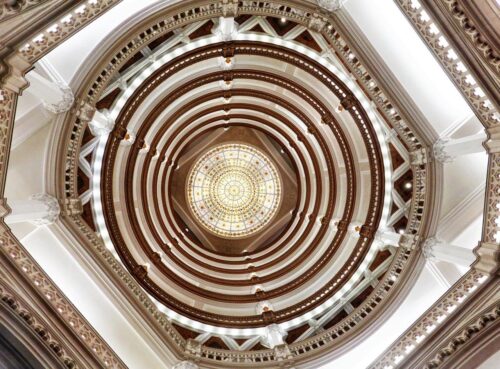 Looking up in the Union Trust Building 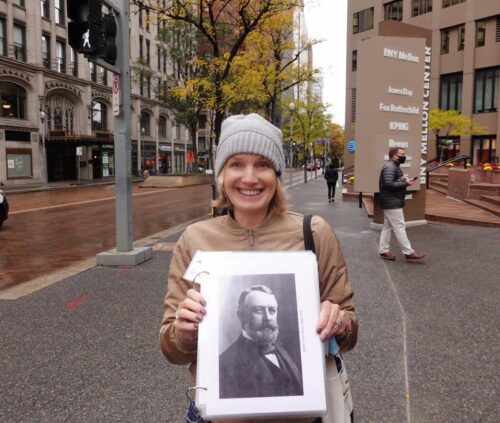 Guide Rachel with Best of the Burgh Tours

Other buildings noted were those of the titans of industry that ran Pittsburgh and in some ways the country.

These included the names of Carnegie, Mellon, and Frick.

Pittsburgh in the past made its money in steel, iron, and glass.

These days they are prospering in what our guide calls “Eds and Meds”, or education and medicine.

Our walk continued to Point State Park which is where Fort Pitt was located. It is here that the three rivers meet.

Look left and you can see the Mount Washington bluff. To the right are the sports stadiums.

Look back and take in the view of the city skyline. Pittsburgh’s oldest structure called the Block House is here, built-in 1764 by the British.

Our tour ended in Market Square which was constructed in 1764.

Market Square is surrounded by shops and restaurants and used at times for events. During our visit, we saw a few men playing their daily chess games.

Don’t miss lunch at Primanti Bros which has been there since 1933.  What, you aren’t interested in a sandwich with french fries inside? See below for more.

Walk The Burgh gets top grades. Our guide was energetic to share “her city” and never rushed us.

The Andy Warhol Museum in Pittsburgh

Their collection of Warhol’s work includes over 1000 prints, 77 sculptures, over 4000 photographs, videos and films.

Also on display are 610 of his boxed time capsules with one open to show the simple things he was saving. 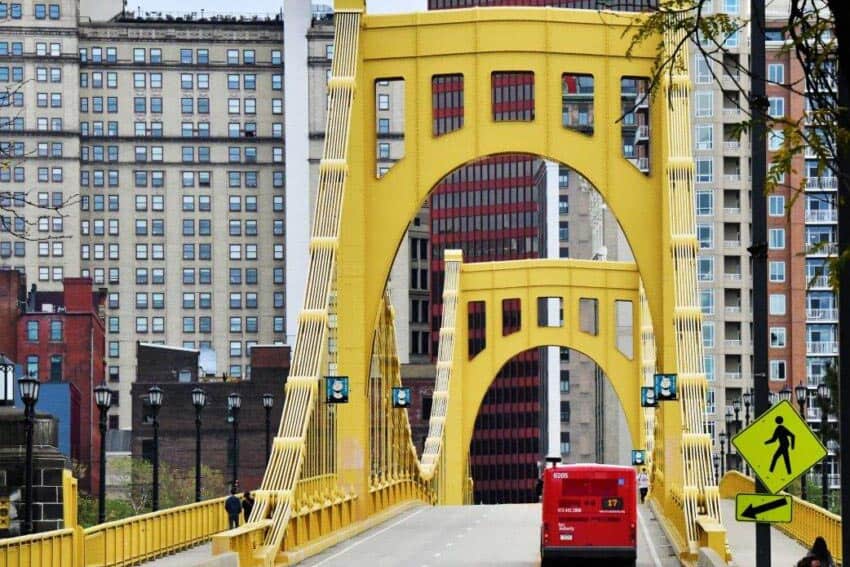 One of 446 Pittsburgh Bridges 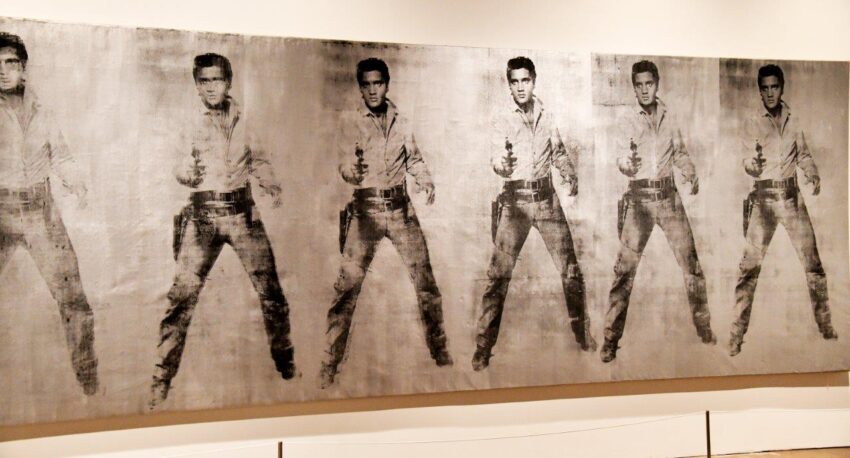 This is the largest museum in North America devoted to one artist. Start your visit from the top and walk down the stairs after each floor. This will give you a chronological progression of his work.  www.warhol.org/ 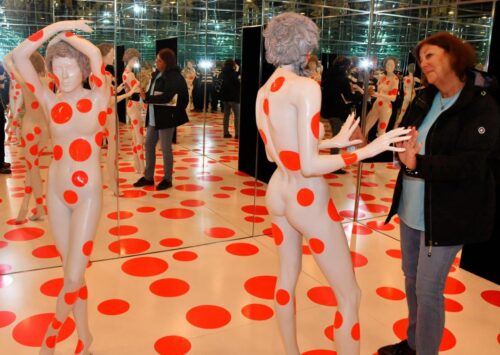 Lights and mIrrors in one gallery at the Mattress Factory

It takes about 90 minutes to visit all three buildings in which one of a dozen artists will take an entire room, floor, or building to set their theme. 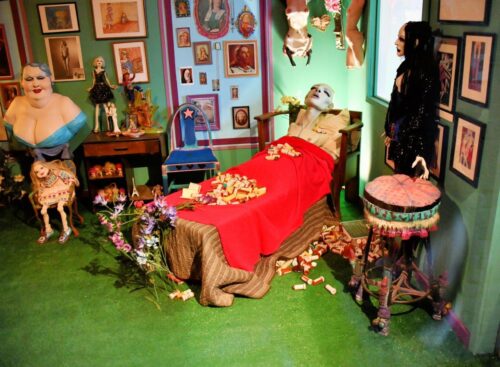 Exhibit at the Mattress Factory

Visitors can become immersed in rooms of lights, mirrors, and sound. At their row house, one artist took over three floors and made a flowing collage.

This used recycled antique furnishings, toys, tools and building materials turning into what I would call “artistically looking clutter.”  I’m a travel writer, not an art critic, so what do I know? mattress.org/

Just a few minutes from the Mattress Factory on this side of Pittsburgh is the Bicycle Heaven Museum. This is the world’s largest bicycle museum and repair shop. It sits in a 7000 square foot warehouse and is cluttered with over 6000 bicycles.

Many of these are rare, antique or were used in movies and TV.  Admission is free but they do take donations. They also sell and rent bicycles. Allow about an hour here. www.bicycleheaven.org

The Monkey’s bicycle ridden in the TV show 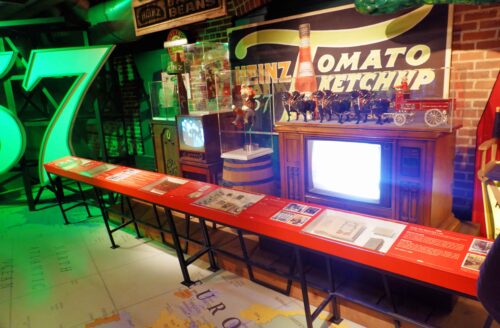 Located near Pittsburgh’s Strip is Pennsylvania’s largest history museum named after the late senator who died in a plane crash in 1991.

This Smithsonian affiliate takes up 370,000 square feet covering six floors. It covers predominately Pittsburgh and Western PA history, people, and events. We chose the following exhibits that interested us.

Since I’ve been a faithful Heinz Ketchup user my entire life I was very curious about the name and the company’s 150 old history.

Here you learn more than just ketchup, but also of some of their other 5000 products. (Did you know ketchup moves at .028 mph, slower than a snail?)

On display are old commercials of ketchup, Morris the Cat, and Charley the Tuna. There is a recipe book from 1869, and walls of displays and artifacts showing how the company grew from a farm stand. An unusual old artifact is the pickle pouch the salesman would carry. 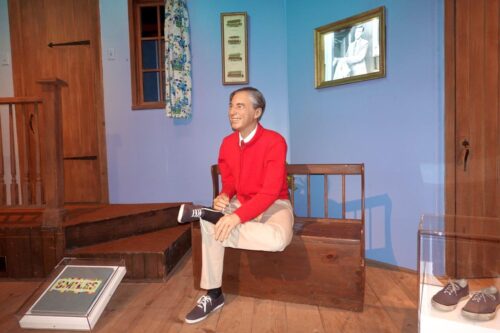 Pittsburgh’s kindest neighbor, Mr. Rogers is highlighted here. On display are parts of the TV set including King Friday XIII’s castle, a few puppet characters, video, clothes and other memorabilia.

Other exhibits we dashed through at the Heinz History Center included Western Pennsylvania’s glass industry and a section on innovations made in Pittsburgh.

These included the baseball stadium, Ferris wheel, gas station and the polio vaccine to name a few. www.heinzhistorycenter.org/

A Blast From the Past 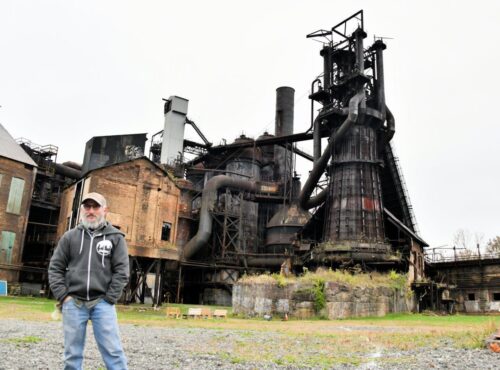 Director Ron Baraff and his “office”

Fifteen minutes west of the city you can see why Pittsburgh was called the Iron City.

The Carrie Blast Furnaces National Historic Landmark is the last two blast furnaces in the area to survive. This place looks like it came out of a set for an apocalyptic movie.

During their peak, they produced between 1000 and 1250 tons of iron ore per day in what had to be one of the hottest and most dangerous jobs.

A detailed two-hour guided tour takes you completely around and inside the complex.

During our walk, we stopped in different areas of the complex to learn about the processes needed to make iron ore and the difficult working conditions the men had to endure. 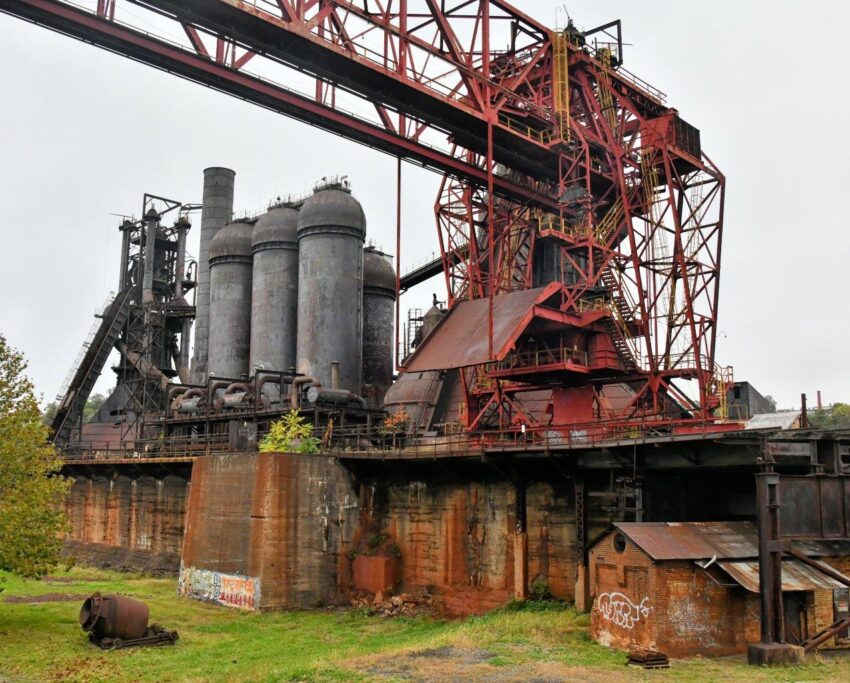 The backside of Carrie Blast Furnace 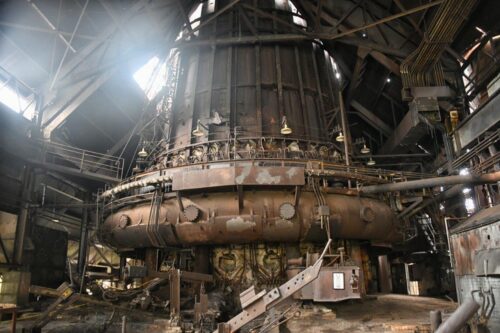 Inside and up close to a blast furnace

During the walk around you will see mazes of pipes, stairs, railroad tracks and rusty objects all around the blast furnaces.

Mixed in and around the complex are examples of how the art world embraced the place.

You can also see why this bleak-looking site has become a popular wedding venue.  website

The Strip District was once a major industrial hub for Pittsburgh.

Today this half-mile section of converted warehouses is lined with an eclectic mix of stores. 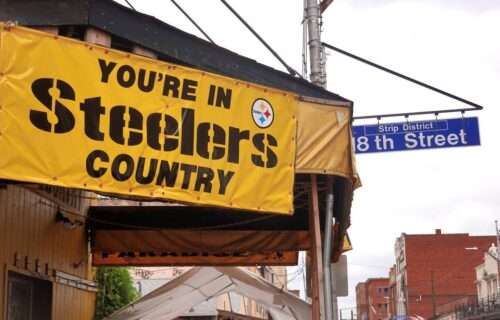 A store in The Strip 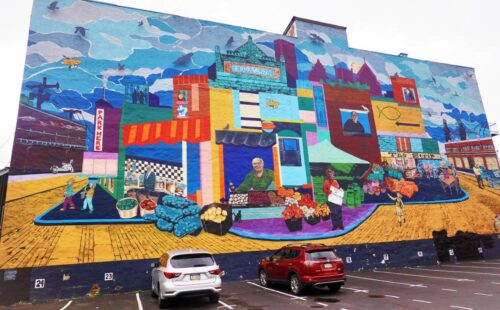 A mural in The Strip

There is a spice shop, bakery, a large candy store, ethnic and produce markets, coffee shops, bars and restaurants.

One shop sells only Pennsylvania distilled products. The Strip is a fun, non-flashy place to stroll around.

They are both under one roof and you can spend an entire day between both places.

The natural history museum has 10,000 items on exhibit. My quick visit included a look at their internationally recognized paleontology section that had an impressive dinosaur collection.

Their collection of minerals and gems are exceptional.  https://carnegiemnh.org/ 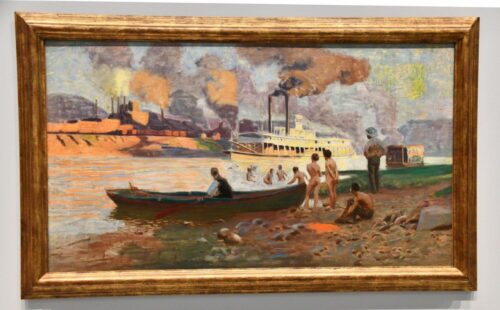 The Carnegie Museum of Art was the first in America to focus on contemporary art.

The collection of what they call “Old Masters of Tomorrow” is what they are most known for.  https://cmoa.org/

The Omni William Penn Hotel opened in 1916. It combines old-world charm with a central location walkable to anything in downtown Pittsburgh.

Its stately high ceiling lobby has large chandeliers and comfortable seating areas with a bar off to the side.

Check out the historical display cases by the elevator with photos of famous people and events that took place here.

The rooms are spacious and the service is what you would expect from an Omni Hotel.  website

Altius is a special occasion restaurant sitting up on the bluff in the Mt. Washington area. It has a contemporary American menu.

Altius combines a good dinner, attentive service with the best view of Pittsburgh. After dinner take the Duquesne Incline for a joy ride up and down the hill. website 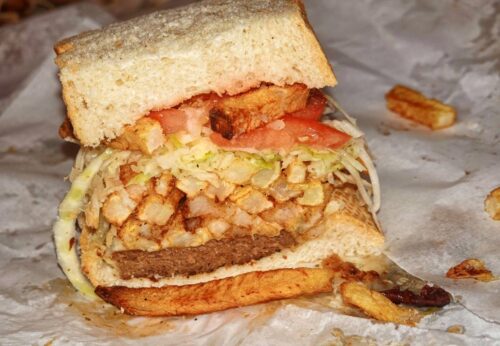 Primanti Bros has been serving “Pittsburgh style” sandwiches since 1933. These sandwiches are stuffed with fresh coleslaw, fresh-cut fries and cheese.

Their signature sandwich is a throwback to the steelworkers having only a 15-minute lunch break.

By placing everything between two slices of Italian bread it made for faster eating.

We recommend the original restaurant on Market Square, but there are over 20 of their restaurants in the Pittsburgh metro area.

Also, unless you are very hungry, we found sharing a sandwich worked well. Try one of the local tap beers to wash it down. primantibros.com/

Kaya in the Strip District has become popular serving Caribbean / Latin-inspired dishes. Our palate was awakened with their flavorful food and creative craft cocktails.  https://kaya.menu/

Waffles INCaffeinated located downtown has a large menu of waffles that can be ordered with almost anything you can think of on them.

For those with sensitivities, there are gluten-free, soy-free and vegan waffles. The coffee here is quite good.  www.wafflesincaffeinated.com/ 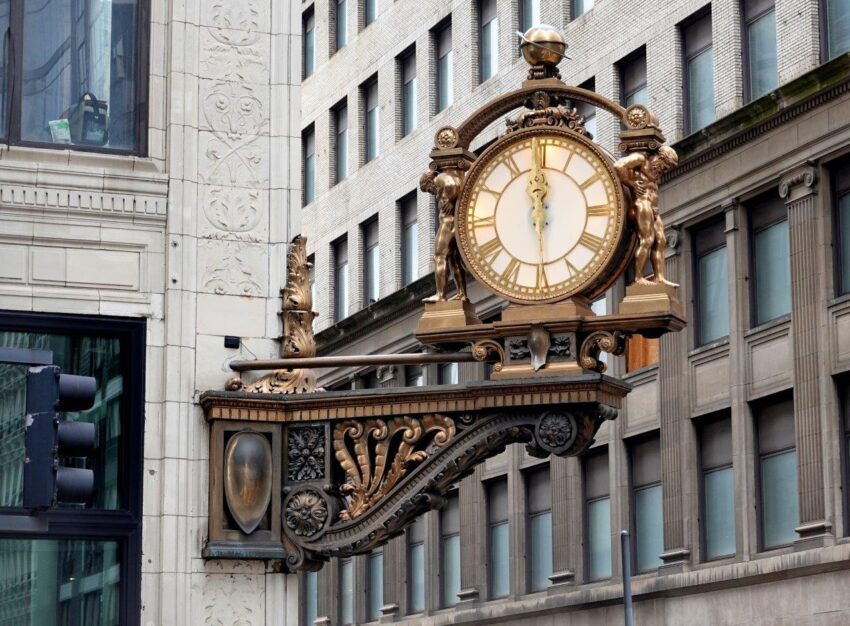 For everything Pittsburgh, visit www.visitpittsburgh.com/