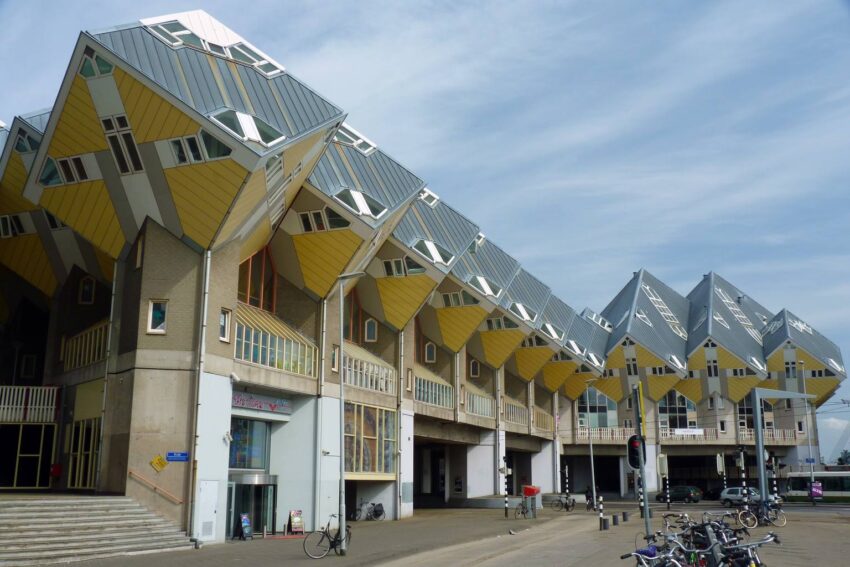 Have you ever wanted to stay the night in an art museum? That’s the premise behind one unusual hotel-hostel chain, Hotel Not Hotel, which has recently made its way to Rotterdam, Netherlands. 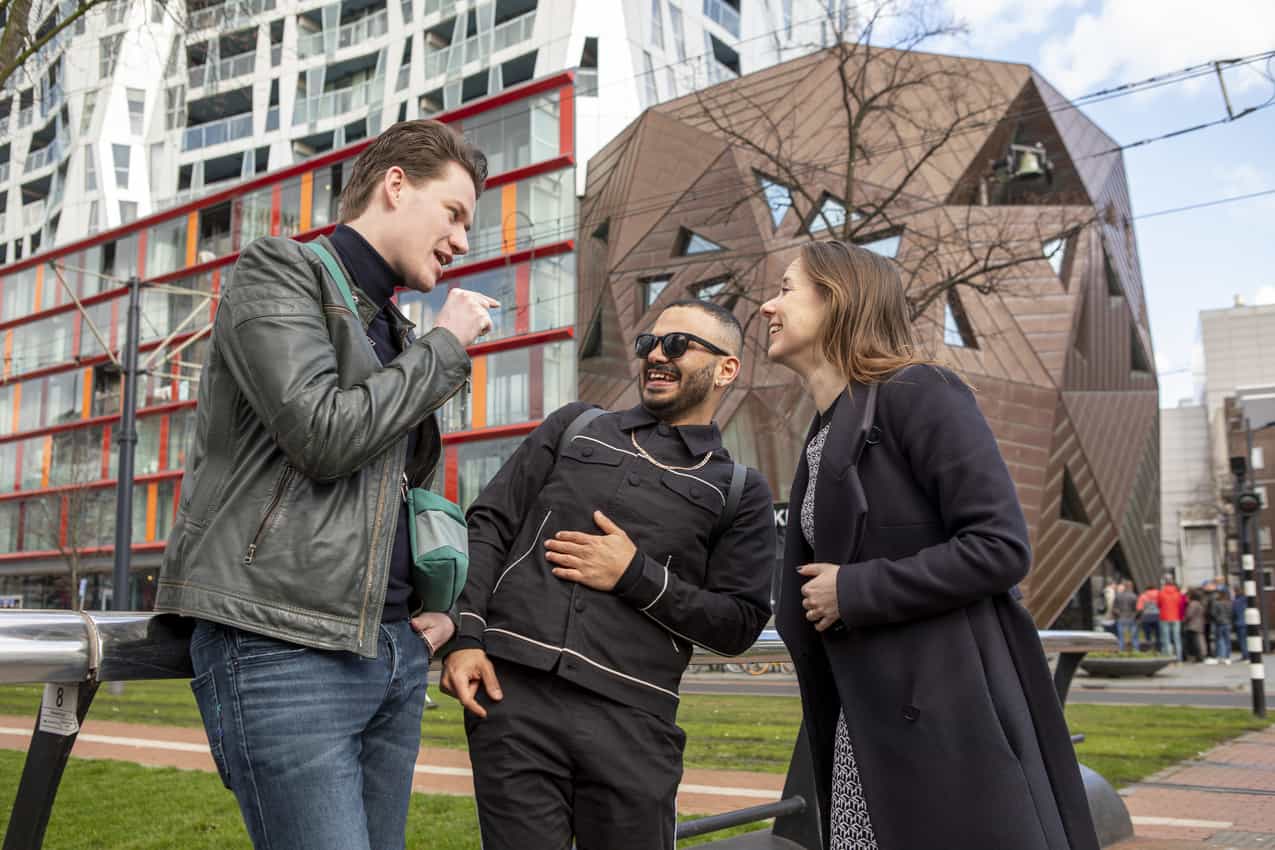 Rotterdam is an important port city and, because of its importance in trade, its city center was almost completely destroyed by Nazi forces during World War II.

Only five pre-WWII buildings survive to this day: a church, a mill, a trade center, a post office, and the old city hall.

Therefore, much of Rotterdam had to be rebuilt, and the city had to rely heavily on its artists and architects to bring back culture and vitality to the area.

This explains the city’s wider streets – a rare luxury many of Europe’s other cities can’t offer – and its interesting mishmash of 1950s to 2010s architectural and public art styles.

In this search for a new culture, Rotterdam didn’t shy away from the innovative…and the unusual. Here are just some of the odder components of Rotterdam that make it a worthwhile city to visit.

The Hotel Not Hotel’s founders (Bruno Bont and Tijmen Receveur) converted what was once supposed to become a Turkish Bazar to a nearby mosque in Amsterdam into an innovative hotel. Because of the building’s odd layout, the designers had to scrap traditional hotel layouts to transform it into a workable accommodation. 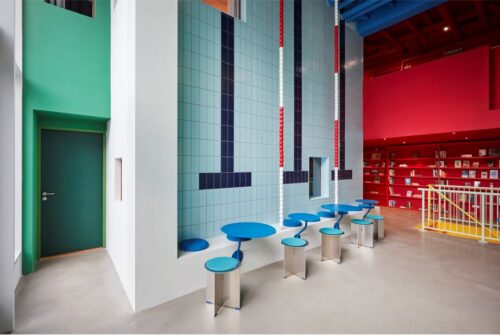 At Hotel Not Hotel’s Rotterdam location, the door to your hotel room could be behind a vertical swimming pool or a bookcase.

The founders decided to make the hotel-hostel a highly social experience where guests are encouraged to spend more time in the lobby or dining areas than in their rooms. The success of their unconventional hotel design inspired them to open a Hotel Not Hotel in  Rotterdam in November 2021.

“It was quite a challenge to find a location with enough space (both horizontal and vertical) to allow us to build what we call ‘two-story-tall pieces of art you where you can sleep in,'” said Receveur.

Most of the rooms are small, some with only enough space to fit the bed(s).

But what the rooms lack in size, they make up for in aesthetics. Each room was carefully designed by Collection-O, a group of artists that all studied at the Eindhoven Design Academy. 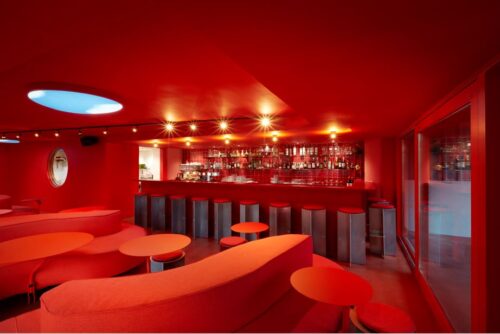 Differing from the Amsterdam Hotel Not Hotel, the founders decided to locate the Rotterdam hotel’s restaurant, Jesús Malverde, on a separate floor to the hotel rooms. That means longer hours and more time for fun!

That means the door to your hotel room could be camouflaged within a section of a bookcase, a wall of mirrors, or behind the tiles of what appears to be a vertical swimming pool. You can relax within the sweet-adorned walls of a Candy House or even spend the night in an enlarged cuckoo clock.

The hotel also features its ruby-hued Mexican restaurant and bar, Jesús Malverde, on the ground floor.

According to Receveur, “Our restaurant space used to be the old cafeteria of the famous local ice skating rink/court (Schaatsbaan in Dutch, this is also the name of our street). A lot of locals come by these days and tell us they used to sit in our ‘restaurant’ as kids. Furthermore, the building was once used many, many years ago as a hostel.”

Hotel Not Hotel in Rotterdam has 36 rooms and prices range from 49 – 180 euros per night.

One example of Rotterdam’s more abstract plays on architecture is reflected in its Cube Houses.

These yellow cubes are a product of the 1970s and Dutch architect Piet Blom’s imagination. They tilt at a 53.5-degree angle (to be exact) over Overblaak Street to create a pedestrian bridge and unusual living complex for some lucky Rotterdam residents. 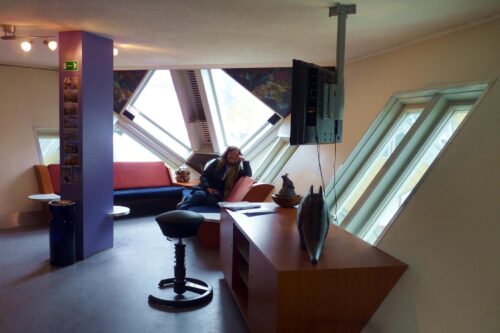 The living room of the Show Cube provides a glimpse of residents’ cubic living situations.  Photo by Cmglee

The houses are surprisingly spacious. The first floor of the cube contains a living room, kitchen/dining space, and bathroom.

The second floor has two bedrooms and a bathroom, and the top floor (with 18 windows) is a single-room space that can be used to the residents’ liking. The two-level trunk leading up to the living space can be used for storage.

For as little as $37 a night, you can experience what it’s like to live in a place with slanted walls. Stayokay runs a hostel in some of the cubes with a variety of available rooms for 1- 6 people.

But for those curious enough for merely a brief glimpse inside, you can browse the Kijk-Kubus Museum-house, or Show Cube, for 3 euros. The museum is fully-furnished with angled furniture to show how residents might make the most of their slanted space. 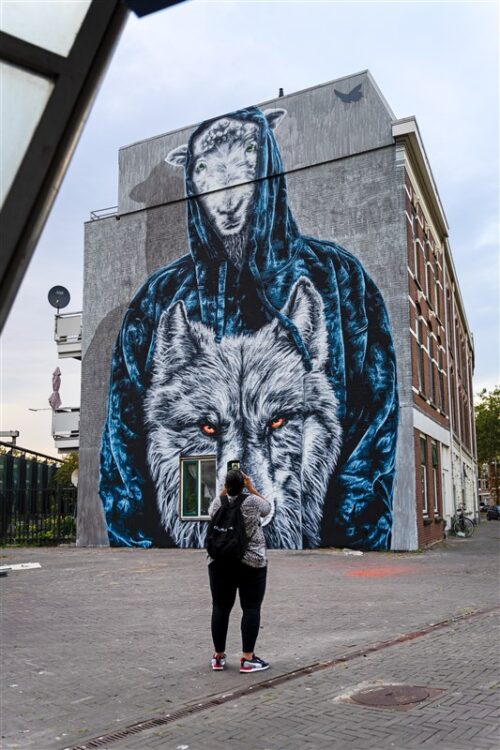 Rotterdam is home to an abundance of street art. This display was created during POW! WOW! Rotterdam, the city’s annual street art festival.  Photo by Liset Verberne

Decorating the streets of West Kruiskade

The rest of the city was built in a less interesting way. So, many artists decided to spruce up public places with fun and unusual street art displays.

In West Kruiskade, a massive teapot dresses up the exterior of an upper-story nursing home. On its ground floor is De Ijssalon ice cream shop with a variety of fun flavors: stroopwafel, Bastogne cake, or grandma’s apple pie ice cream anyone?

In the day, you can see the delicate blue and white designs of flowers, ships, windmills, and cows on the teapot. At night, the edges of the teapot are illuminated by strings of lights.

It’s also conveniently located within the Rotterdam Street Art Museum. Not formally housed in a building, you can see the museum’s exhibits by wandering the main and side streets of West Kruiskade. A guide to all eight of the murals and the artists who created them can be found here.

Also, just a two-minute walk from the ice cream shop near the port of Rotterdam is The Giant of Rotterdam statue at the front of West Kruiskade’s park, or Wijkpark Oude Westen.

The life-sized bronze statue commemorates the Netherland’s second tallest man, Rigardus Rijnhout, who once lived in Rotterdam. You can compare your stature against his seven-foot 6.5-inch frame and a replica of his size 29 shoes.

The Netherlands is well-known for its plethora of art museums. While Rotterdam has many of its own worthwhile art museums, it also features some quirkier ones. 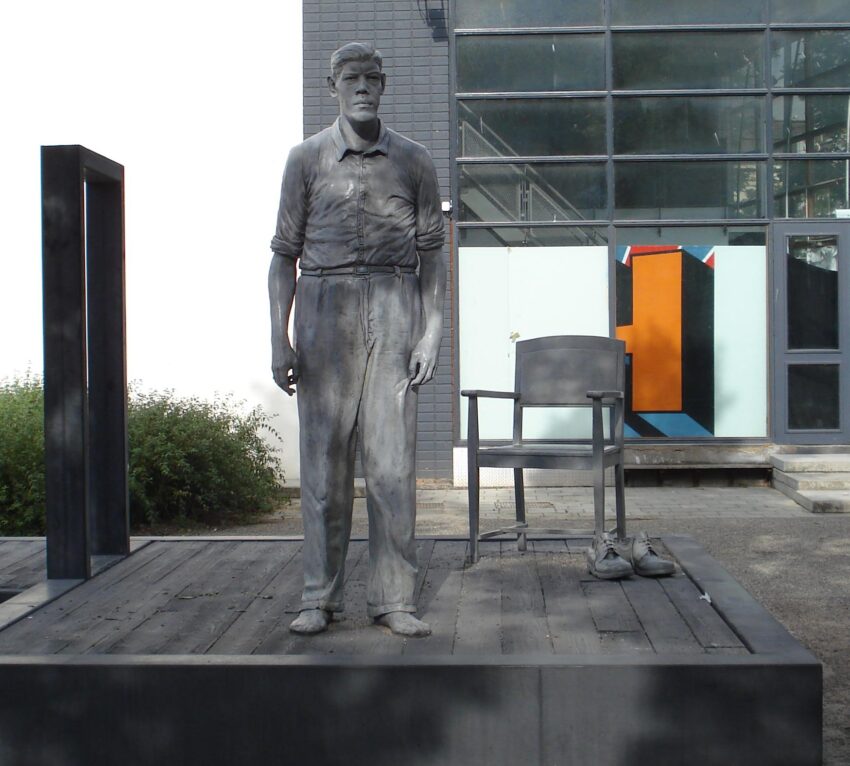 The Giant of Rotterdam statue is located at the front of Wijkpark Oude Westen, nearby where the “giant” used to live.

First on that list is the Dutch Pinball Museum opened by pinball enthusiast Gerard van de Sanden in 2015. Take a step back in time and treat your inner child to over 100 different pinball machines. The best part? Except for the extremely old and rare ones, they’re all playable! 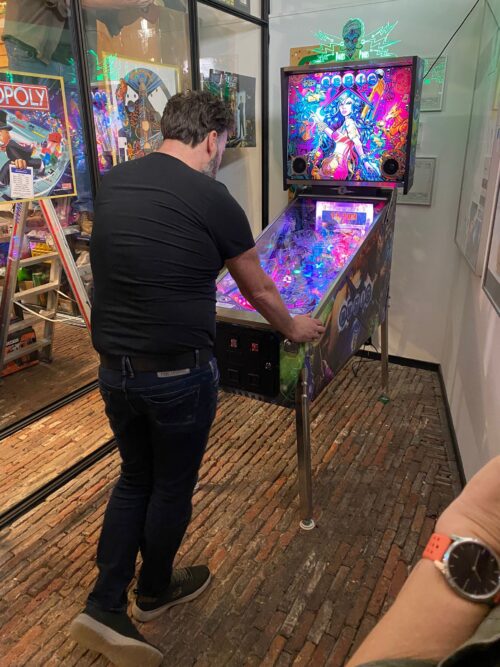 The Magic Girl is the rarest and most valuable pinball machine in the Dutch Pinball Museum’s collection. Photo courtesy of Gerard van de Sanden

According to van de Sanden, his favorite machine is their Guns N’ Roses Collectors Edition (only 500 of these were made).

The pinball machines date back from the 1940s all the way up to the present day. Themed pinball machines such as a 1948 Alice in Wonderland one, 1982 Baby Pacman model, and 2021 The Mandalorian pro are all playable options.

If pinball machines aren’t to your liking, perhaps the Chess Pieces Museum, or Shaakstukkenmuseum, will interest you. And remember those Cube Houses from earlier? This museum is located right beneath them at Overblaak 94.

The founder, Ridder Dijkshoorn, and another chess set collector, M.J. Glotzbach, combined their collections to open the museum in 2005. Since then, they’ve continued to add more beautifully crafted or downright fun sets – think of those made entirely out of Bruce Lee figurines or characters from The Flintstones.

The museum also hosts a yearly design competition encouraging participants to enter their own hand-crafted chess sets. Visitors to the museum can cast votes for their favorite set. Participants can win anywhere from 1,000 euros for first prize down to 50 euros for a fifth prize and 25 euros as a consolation prize.

Hotel Not Hotel’s Tijmen Receveur explains it best: “Rotterdam feels like another capital city in the Netherlands. It’s real, raw, and beautiful at the same time. It has great architecture, and it breathes art. It’s an uplifting place.”

Whether you choose to stay in an unconventional accommodation, wander the streets for the public art, or spend a day with flippers and a pinball, Rotterdam is surely a place you don’t want to miss.

Learn more about Rotterdam and start planning your visit here.