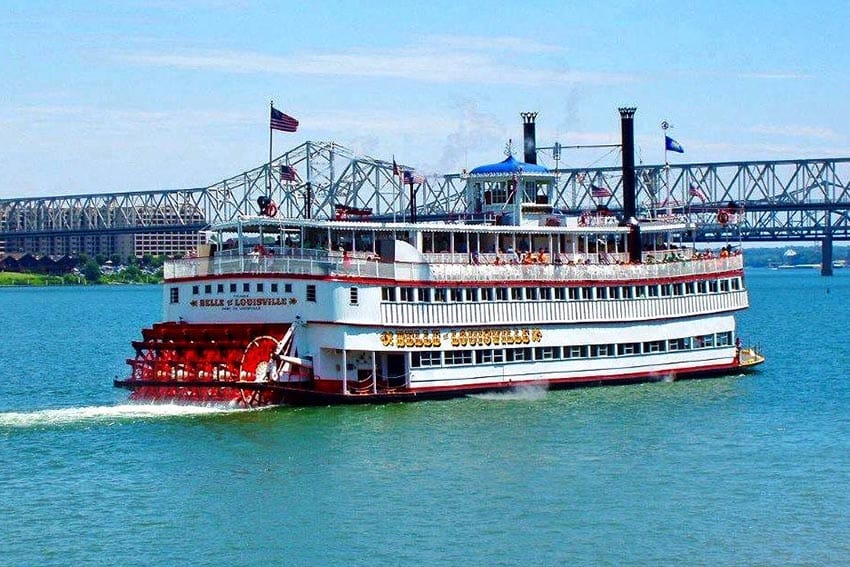 Louisville: Famous for Ali, the Slugger, and Bourbon 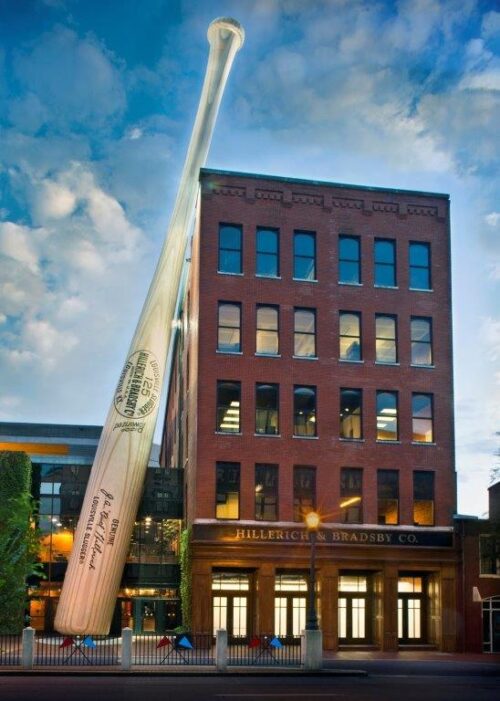 If you have an interest in bourbon, baseball bats, old riverboats, architecture, and a diverse taste for museums, Louisville Kentucky will make an entertaining mini-vacation.

Louisville Kentucky is often referred to as the “gateway to the south” or the uppermost southern city.

It is the oldest city west of the Appalachian Mountains founded by pioneers in 1778 and has a population of 600,000.

It is named after King Louis XVI of France in honor of his aid to the Americans during the Revolutionary War.

Downtown Louisville is the best place to stay because you can walk to museum row, distilleries, restaurants, clubs, and the KFC Yum Center for sporting events and concerts

Located on Museum Row is the Louisville Slugger Museum and Factory. This is one fun and interesting attraction to visit. To find it, look for the world’s largest baseball bat towering 120 feet up. 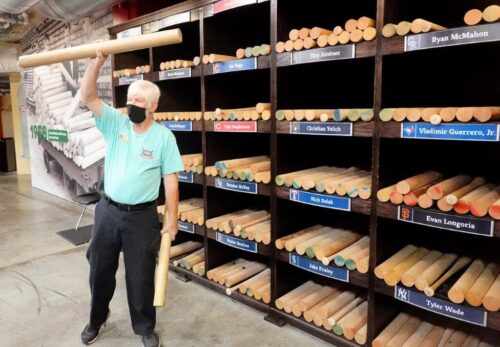 Wooden pegs that are lathed into bats

With no time to make one himself, he approached a local woodworker making spindles and railings.

With his new bat, he got three hits and a new business was born.

The factory tour starts with a short video on sourcing ash or hickory wood.

Visitors then walk the shop floor stopping in different production areas while someone explains what is happening.

Everyone’s eyes were peeled to the computerized machine that was lathing a bat for Atlanta Brave Adam Duvall in 48 seconds.

Adjacent to the machine were bins with professional players’ names and the pegs waiting to be turned into bats.

Further down the shop floor was another lathing machine producing non-pro player bats in 30 seconds.

Bats then go through additional procedures for their finishing which include the famous round seal being stamped in near the middle.

At the end of the tour, everyone gets a miniature bat. 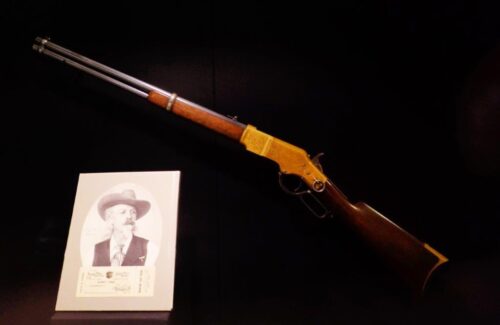 Before (or after) your timed tour, visit the museum. There are several exhibits on everything baseball with an emphasis on bats.

In their gift shop, you can even buy a bat stamped with your name.  www.sluggermuseum.com/

Located across the street from Louisville Slugger is the Smithsonian affiliate, Frazier History Museum.

This is probably the only museum where one can learn about history, see important artifacts, and sip bourbon (for learning purposes of course). 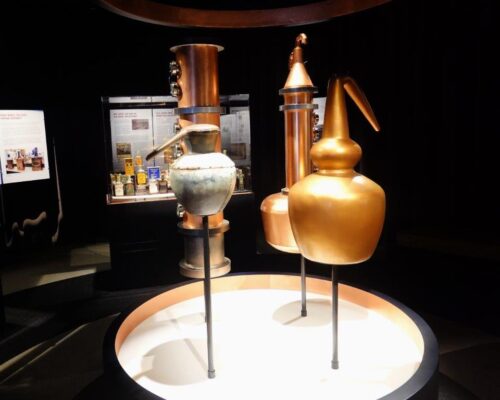 The museum gives a good overview of the history of Kentucky and Louisville.

Its exhibits include the Lewis and Clark experience (they met in Louisville), unusual war miniatures and one of the largest collections of toy soldiers.

There are old stills, interactive exhibits on bourbon knowledge, a temporary exhibit on the famed Pappy Van Winkle Bourbon and shelves containing every bourbon produced in Kentucky.

The museum also has a cool-looking speakeasy. 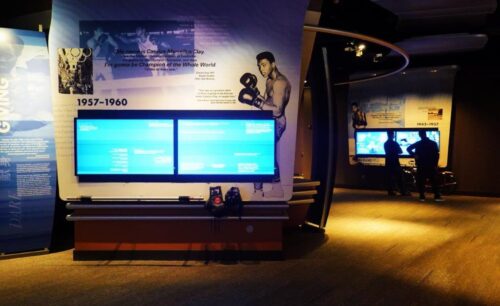 Media boards, video and art teaches visitors about the champ

World boxing champion Muhammad Ali was born and raised in Louisville. (He is also buried in Cave Hill Cemetery, another popular tourist site).

It fitting for the Muhammad Ali Center to be on Museum Row.

This six-floor museum is dedicated to every part of the boxer’s life. You can understand the champion through art, videos of 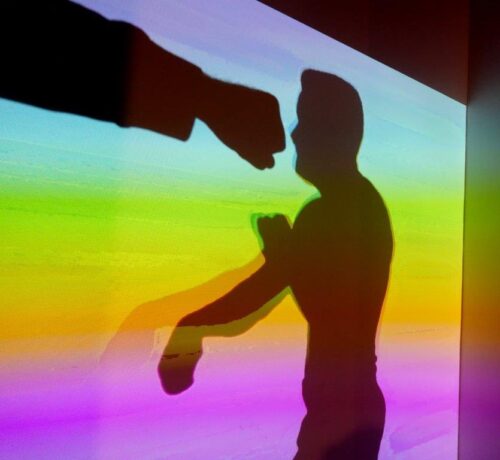 his fights, interviews, interactive displays, and graphics with photos and his quotes. Give the computer shadow boxer a bout.

Allow one to two hours depending on your interest in boxing and the champ. https://alicenter.org/ 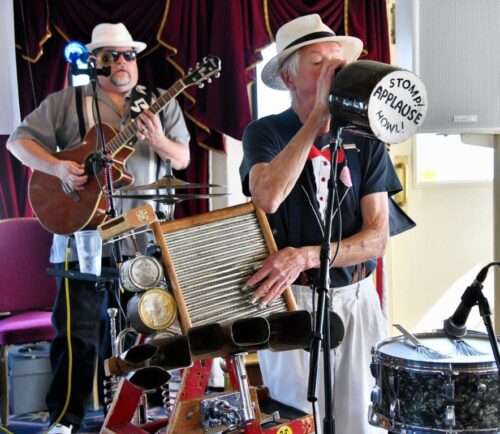 Cruising with a jug band

The Belle of Louisville offers two boats for scenic Ohio River cruising that can include lunch or dinner.

We opted for the BBQ picnic lunch cruise on their smaller boat, the Mary M. Miller.

The Mary M. Miller is a “faux” paddle wheeler. It has the classic pretty lines of an old steam-operated ship but is powered by propellers.

She is named after the first female steamship captain licensed in 1884.

Aboard for the two-hour cruise was a folksy entertaining “jug” band. Listening to them was a fun piece of regional Americana. The ride and service made for a perfect outing.

Their second boat is literally a floating national treasure and working landmark. This true paddlewheel steamship named the Belle of Louisville was launched in 1914.

On the first level, you can see the large steam engines, pistons, brass gauges and the large wooden wheel that propels the boat.

Upstairs is the decorated ballroom that makes a perfect venue for their dinner cruises. You can hear her steam whistles play tunes miles away.  https://belleoflouisville.org 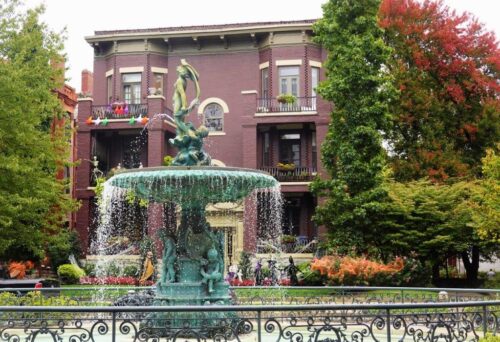 Old Louisville has the largest collection of Victorian Architecture

This neighborhood also has the United States’ largest collection of pedestrian-only streets in a neighborhood. Here we visited two streets with homes that face each other on a quiet walking path.

Some of these streets are complete with fountains and landscaping. Garages and parking are out of sight in the back.

During the tour, David discusses the era between 1883 to 1887 during the Southern Exposition (world’s fair), the various styles of buildings, and the families who lived there.

He joked how the money came from Louisville’s three sins: bourbon, horse racing and tobacco. https://louisvillehistorictours.com/

The Run for the Roses 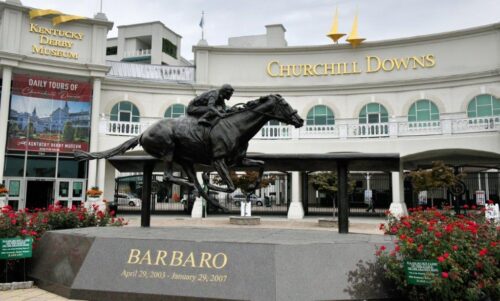 While not a horse racing fan, I was easily caught up in the fanfare and excitement of the race, museum, and track.

The museum starts with a fast-paced 360-degree video of Kentucky Derby day. After the video, visitors walk through the different exhibits.

These include uniforms, trophies, newsreels of past races and the fabulous fashions that make race day special. You can also ride a virtual racehorse.

From the museum, you can go on a guided tour with reservations being essential. On the walk to the track, you are told about the derby history, special horses, the staff behind the track, and the architecture.

Visitors walk the path under the stands where the horses go for their 1.25-mile race. From the track, we were pointed above to the “Millionaire’s Row” where seats can cost as much as $14,000! 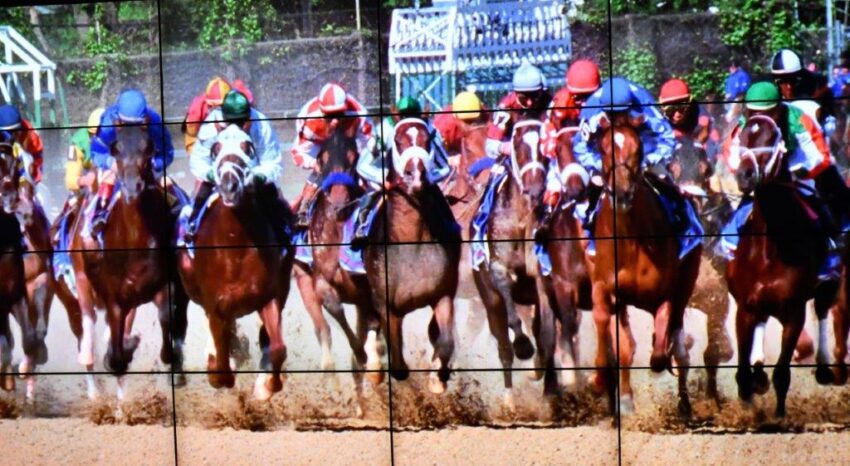 The video screen at the Kentucky Derby museum entrance 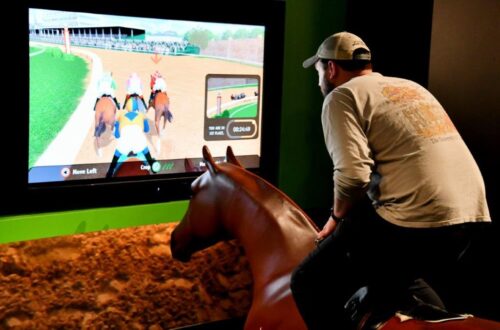 Between the museum and the track tour, you can sense the excitement of what race day is like without dressing in your finest clothes and proper hat.

The Roots 101 African American museum is a compact two-level place off Main Street.

It is dedicated to the story of the African American Journey to America.

It has an impressive collection of old bronze statues from the Kingdom of Benin (now Nigeria) and its sad story of the British conquest. 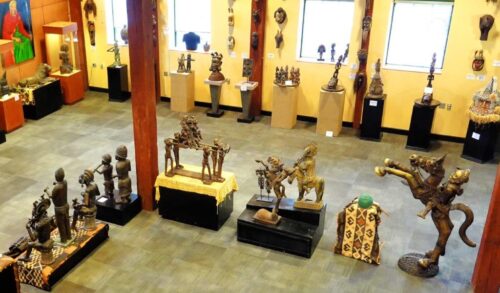 Bronzes from the Kingdom of Benin greet visitors

Exhibits to note include Sports, the Great Equalizer, The Allen Hotel room, Music in Kentucky and a chance to feel what actual shackles felt like.

Look for the museum’s founder Lamont Collins to show you a few highlights. Allow about 45 minutes here. www.roots-101.org

The Speed Art Museum is Kentucky’s oldest and largest Art Museum located adjacent to the University of Louisville. 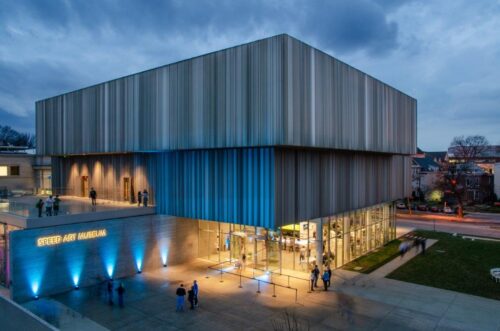 Its modern 200,000 square foot building features art and sculptures of different styles and periods from Europe, Africa, and the United States.

Parking is $5 next door and Sunday admission is free. Allow about 90 minutes.  www.speedmuseum.org 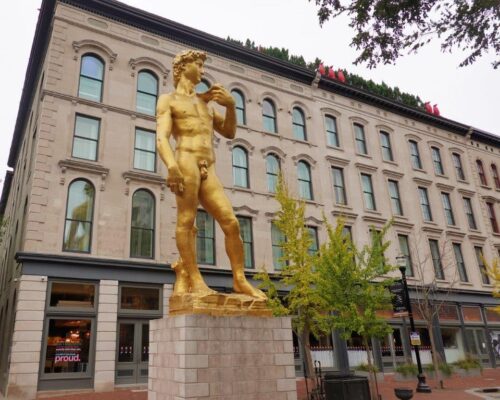 The Golden David on Whiskey Row

About a mile and a half from downtown is the Big Four Bridge and the 85 acre Louisville Waterfront Park.

Crossing the mile-long decommissioned train bridge is a nice way to get some fresh air, enjoy the river views and get a little exercise. https://ourwaterfront.org/

Museum Row, also known as Whiskey Row, is on Main Street. Along the street are old three and four-story buildings with various sculptures, statues, bats and murals.

One statue that stands out is the golden David that is double the size of the original in Florence. 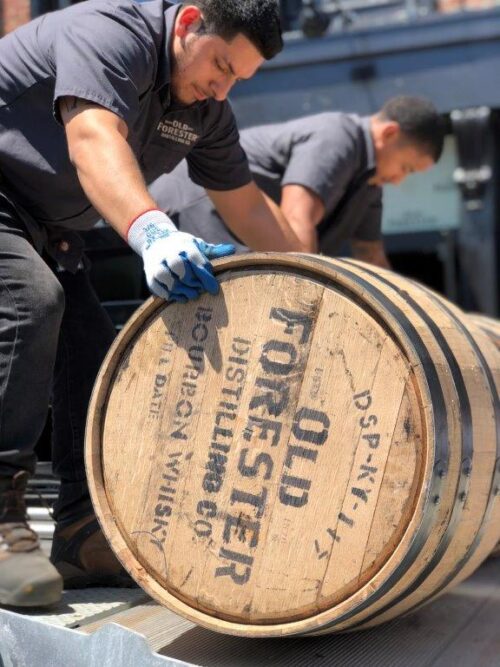 The first bourbon distillery in Kentucky opened up in Louisville in 1783.

Presently there are nine distilleries open to the public. Most are within one mile of each other, with five being on Main Street.

Reserve a tour in advance.  https://bourbonism.com/

Find out more about Louisville on their tourism website. 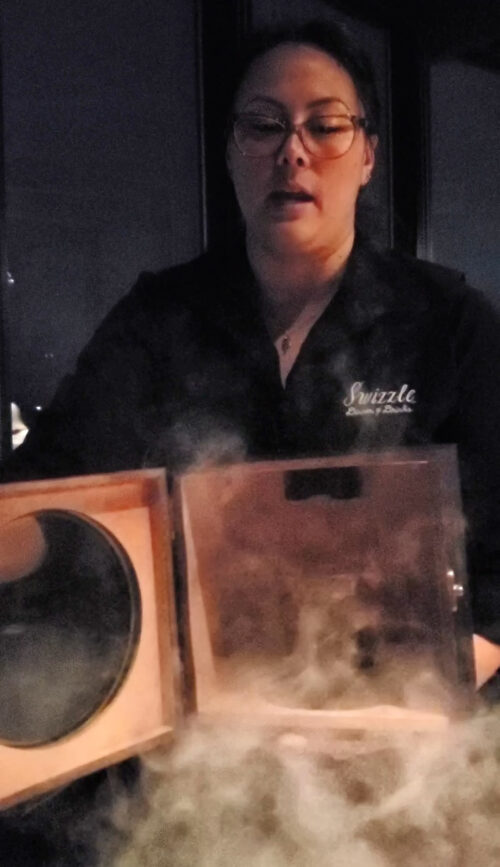 Swizzle Dinner and Drinks offers fine dining with a great view of Louisville and the Ohio River.

This restaurant sits on a revolving platform the top of the Galt House Hotel serving an American menu emphasizing steaks.

This restaurant sits on a revolving platform atop of the Galt House Hotel serving an American menu emphasizing steaks.

They have an enticing craft cocktail menu. For something to stimulate your sense of smell and taste try the 1910 Old Fashioned.

This is a cocktail made from bourbon distilled two blocks away. It is served in a sealed box full of charcoal smoke and opened in front of your face.

We found two starters, a shared perfectly cooked 16-ounce cowboy steak and the bananas Foster cheesecake perfect for two. The service was spot on. www.swizzle25.com

The Mussel & Burger Bar is an excellent casual place that specializes in what its namesake is. There are 15 styles of burgers.

We went southern with a burger topped with fried green tomatoes, rémoulade sauce, and pimento cheese on a pretzel bun. The mussel Meuniere is as classic French as this dish can get.

Both meals go perfect with their hand-cut fries and one of the ten Kentucky beers on tap. www.mussel-burger-bar.com

Bucks is located in Old Louisville where we enjoyed lunch before our tour. This is a classy restaurant where ladies “do lunch” and business people make deals.

We enjoyed the local open sandwich called the Hot Brown. This is made with roasted turkey, country ham, Swiss cheese, tomato, cheddar garlic on top of wheat bread topped with Mornay sauce. www.buckslou.com

Blackbeard Expresso is the place to go on Museum Row for the local coffee and a quick breakfast. 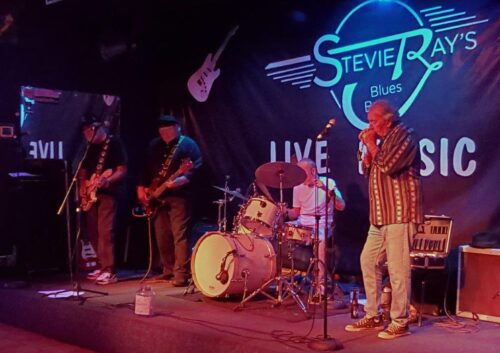 Expect a slightly older crowd. Stick to bottled beer or the most basic drinks when ordering. www.stevieraysbluesbar.com/

The five-star Galt House Hotel on the Ohio River lives up to its rating from the moment you pull up in your car. Here you are greeted with a warm welcome and fast luggage service.

While the regular rooms are very comfortable we splurged on their very large two-room suite. This is perfect if traveling with children or you need the extra workroom.

One reason we choose the Galt for our three-night two-day stay is that it is within walking distance to so many things. The Galt House Hotel is actually two towers connected by a sky bridge having an impressive bar with too many bourbon bottles to count. https://galthouse.com 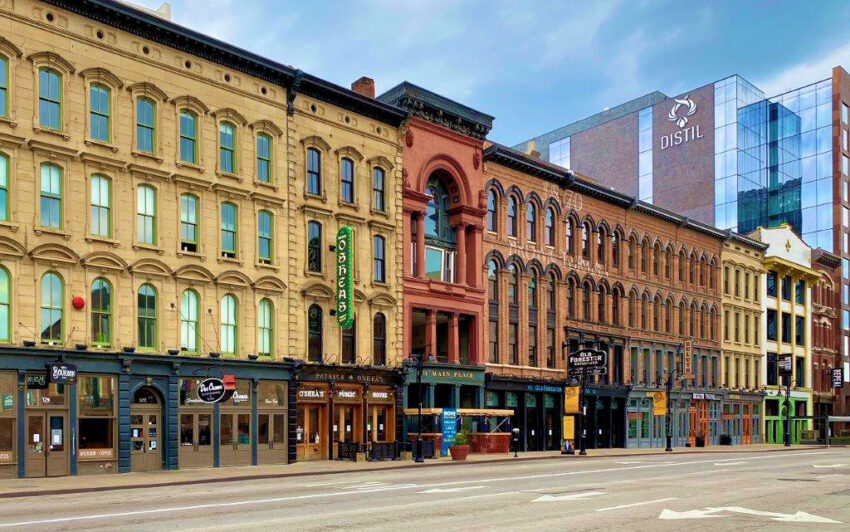 3 thoughts on “Three Nights of Fun in Louisville, Kentucky”