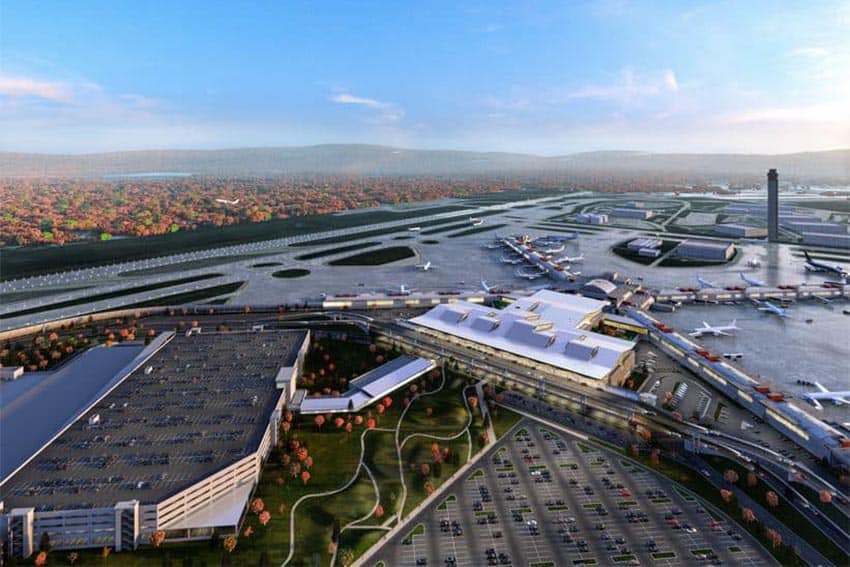 Imagine relaxing in an Adirondack chair on an outdoor terrace surrounded by lush grass and western Pennsylvanian trees and flowers. It sounds like a delightful garden getaway.

But this could be your pre-departure experience while waiting for a flight in Pittsburgh International Airport’s new terminal. 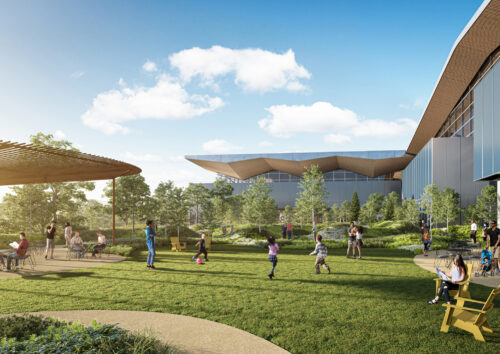 The new Pittsburgh International Airport terminal will have 90,000 square feet of outdoor terrace space for passengers to enjoy both pre and post-security screenings.

Officials broke ground on the project in October 2021, making it the first terminal in America to be built after the COVID-19 pandemic.

The design team, led by the joint venture of Gensler + HDR in association with Luis Vidal Architects, is implementing many modern solutions.

Pittsburgh International Airport was originally known as Greater Pittsburgh Airport. Initially, it was meant to be a military airport, but planners agreed to add a passenger terminal to relieve the traffic of the nearby Allegany County Airport.

Pittsburgh’s airport opened in 1952 and operated domestic flights until the construction of its international wing in 1968.

In its peak use in the 21st century, the airport welcomes around 10 million passengers annually. The airport hosts 17 commercial airlines and flies 125 nonstop flights to over 50 domestic locations daily. Along with its extensive domestic offerings, it currently flies to Canada and Mexico.

Though the airport has seen many expansions over the years, the Allegheny County Airport Authority, which manages the Pittsburgh airport, saw the need for a much larger improvement.

Paul Hoback is the Chief Development Officer for the Allegheny County Airport Authority. He is spearheading the Pittsburgh International Airport’s Terminal Modernization Project, or TMP, and explains the need for the project.

“Because Pittsburgh International is no longer a connecting hub facility designed for one dominant airline, we need different configurations of our aging baggage system, security checkpoints, and international arrivals area. 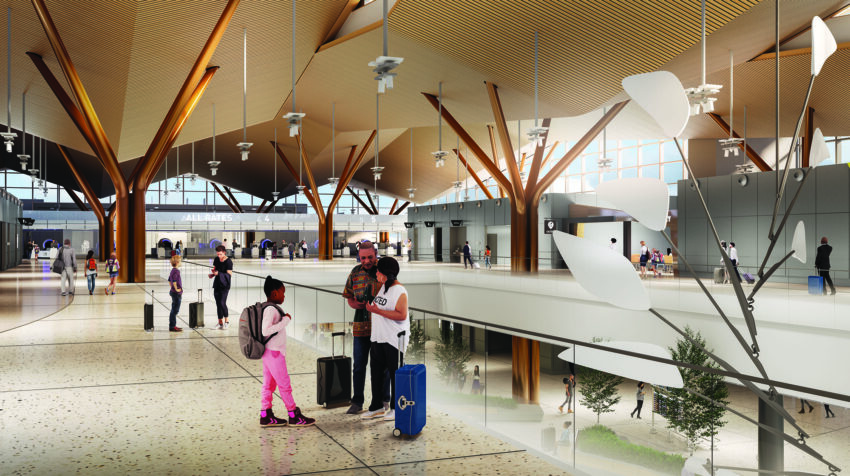 According to Paul Hoback, the Chief Development Officer for the Allegheny County Airport Authority, “the wood ceiling will reflect the natural geography of the region’s rolling hills within the terminal.”

“The new terminal will be reflective of the thriving, modern Pittsburgh that our region is today – with a large focus on technology, sustainability, and innovation.”

That means an innovative airport able to meet the demands and desires of modern airlines, construction workers, and passengers. 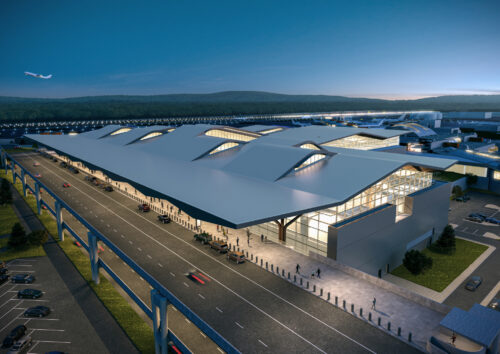 Concrete from existing airfield ramps will be reused for new roads around the new Pittsburgh International Airport terminal.

What can passengers expect from the new terminal? For outbound passengers entering the airport, they will enjoy the expansion’s new parking garage, rental car facilities, and a covered drop-off/pick-up area.

Once entering through the front doors, they will be greeted to a vast ticketing area and their first views of the airport’s wooden ceiling and tree-like support beams.

According to Hoback, “adding more touchless technology such as digital queuing and more smartphone-enabled systems, will greatly improve the passenger experience and allow for more flexibility in the new facilities.”

That improved technology also plans to extend into the TSA screenings.

After passing the screening, passengers will be able to wait for their flights in some of the many outdoor terraces – a first for U.S. airports. Or, they can dine and shop in the terminal’s new retail spaces.

Though the brands have not been decided, Hoback and his team’s goal is to “increase the number of local and regional [retail and dining brand] offerings in the new terminal.” 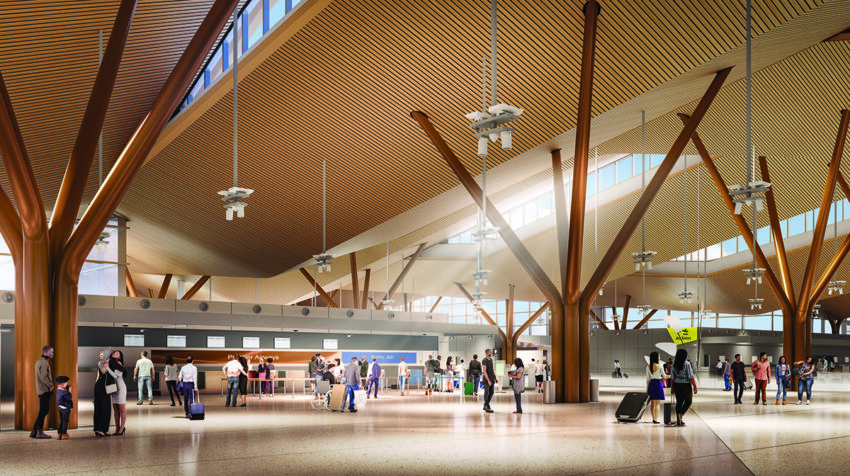 A rendering of the new, expansive ticketing area

Incoming passengers can look forward to the new baggage claim facilities which aim to reunite passengers with their luggage faster.

Hoback said, “Bags will need to travel less distance and go through fewer vertical level changes to get from plane to baggage claim.

In addition, the new baggage claim devices will be longer, allowing each device to hold more bags at one time.”

For this $1.4 billion building project, the Allegheny County Airport Authority plans to put sustainability and local revitalization at the forefront.

The Pittsburgh International Airport is already powered by an onsite microgrid, and is the first airport in the world to do so.

Over 10,000 solar panels and five natural gas generators produce 20 megawatts of energy for the airport. And the builders plan to incorporate even more environmentally-conscious features to sustain the new terminal. 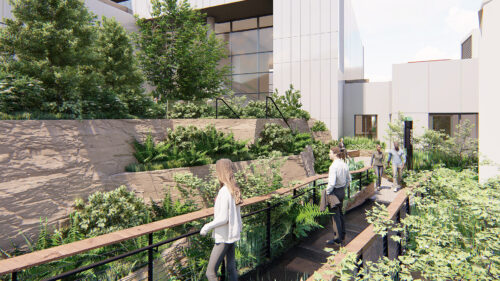 The outdoor terraces will be maintained using water from a rainwater harvesting system. 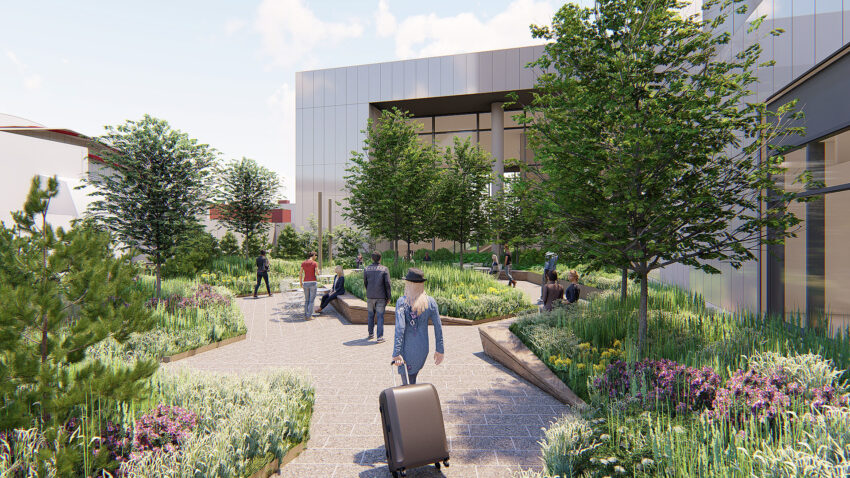 “The outdoor terraces will be maintained year-round and will incorporate landscaping (trees, flowers, natural features) that reflect the nature of western Pennsylvania,” said Hoback.

For the building process itself, the design team plans to locally source materials as much as possible. Hoback said, “one of the project’s suppliers, Sippel Steel Fab, is located just 20 minutes away from the airport.”

This local focus extends to who the project will be hiring. It is estimated that the new terminal will provide 14,500 direct and indirect jobs to a diverse workforce that creates more employment opportunities to women and people of color.

The Future of Airports

The plans for the Pittsburgh International Airport expansion provide a glimpse into the future of air travel. It is a plan that other airports can hopefully use as a model to improve their own environmental sustainability, workforce diversity, and improved passenger experience efforts following the pandemic.

To learn more about the Pittsburgh International Airport and stay up-to-date with their Terminal Modernization Project, visit their website here.