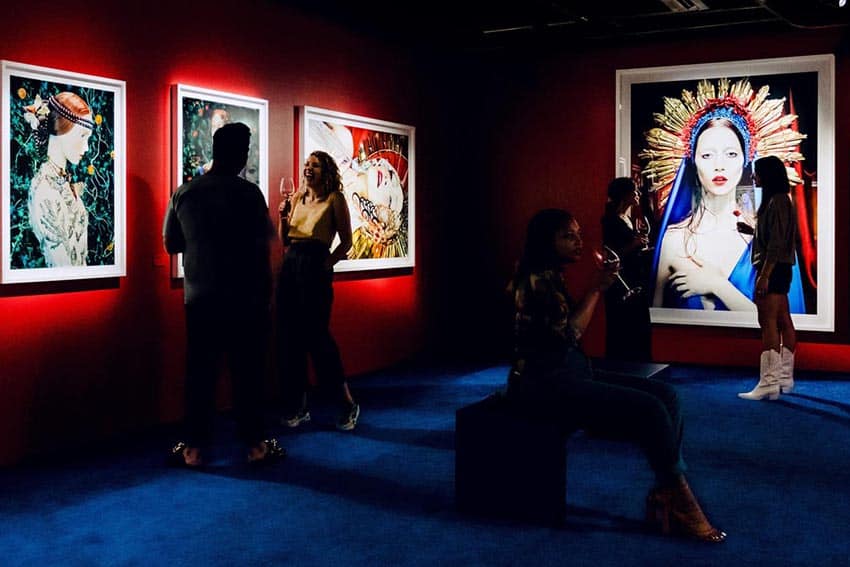 Fotografiska visitors can enjoy a glass of wine while wandering the museum’s six floors of photography exhibits. Photos courtesy of Fotografiska. 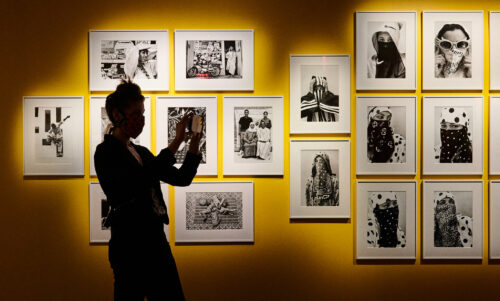 Most of Fotografiska’s exhibits are dimly lit with light focused on the photos to make them pop.

How do you get millennials interested in a museum nowadays? Entice them with booze, of course, and plenty of immersive experiences.

Fotografiska New York is the city’s newest museum of photography for a modern crowd.

Guests can browse the six stories of exhibits (a floor for each featured photographer) from 9 am to 9 pm – all with a specialty cocktail in hand.

The museum is a branch off of the original Fotografiska museum in Stockholm, Sweden which was founded in 2010.

Fotografiska is on track to become the world’s largest privately-owned art museum. In 2019, they opened their museums in Tallin, Estonia and New York City. Plus, new locations will be opening in Berlin, Germany and Shanghai, China in 2022 and Miami, Florida in 2023. 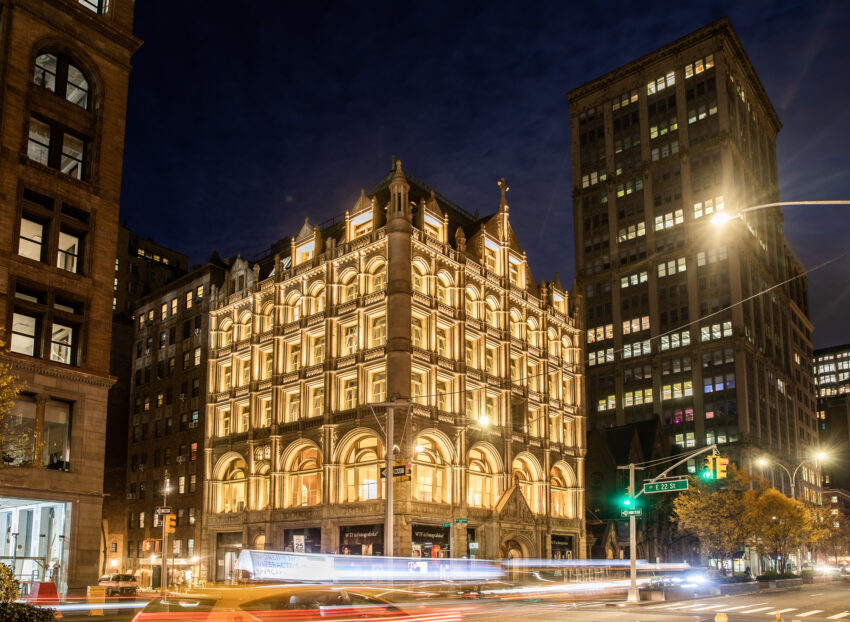 Fotografiska is looking to reimagine and modernize the museum experience. Along with its immersive, inclusive, and ever-changing galleries, the New York location has a café that serves alcoholic drinks from 5 to 8 pm and an exclusive bar housed within a mid-19th century former chapel. 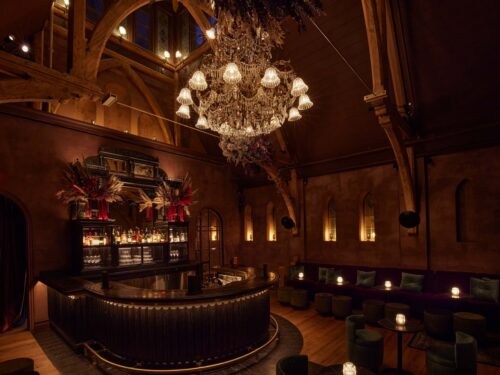 The bar’s building has taken on many roles since its beginning. It originally served the nearby seminary for New York City’s emerging religious leaders. Then, it became a girl’s school.

By the late 1900s, the building fell into disrepair and wasn’t used again until Fotografiska decided to give it a new lease on life.

The result: a luxurious, expansive space in the heart of Manhattan that looks like a religious, but oh so sinuous, take on a speakeasy.

Velveteen drapes border confessional booths, now serving as secluded seating areas to linger over glasses of chartreuse, gin, cherry, and lime. A glittering chandelier, arched wooden beams, and autumnal-toned bouquets all adorn the ceiling. The original organ has been replaced by a DJ booth.

For elite guests, the Chapel Bar can be enjoyed independently or as a supplement to a museum experience. Entry requires a membership: Familj for $449 per year or Patron for $2000 per year.

For all the starving artists out there, the café is a more welcoming alternative. By day, you can sample their selection of drip coffees, espresso drinks, teas, specialty sodas, and freshly squeezed orange, guava, or peach juices. 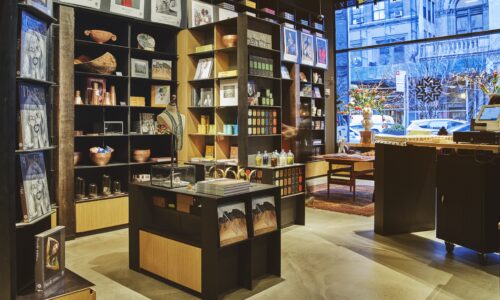 A retail area is located within the cafe where visitors can purchase prints of the museum’s featured photographers.

The café is located on the first floor and you can access it with or without a museum ticket. They also serve breakfast items, cheese plates, and charcuterie boards.

There’s also a collection of beers and wines – even an orange wine from Mendocino – from which to choose.

To commemorate your time at Fotografiska, you can also purchase $25 posters of some of the most iconic images from the museum’s featured photographers including Andy Warhol, Ruth Orkin, Miles Aldridge, and Guy Bourdin.

Fotografiska’s exhibits are ever-changing and aim to present a diverse variety of the photography world’s most celebrated and emerging artists and most engaging, thought-provoking subjects. 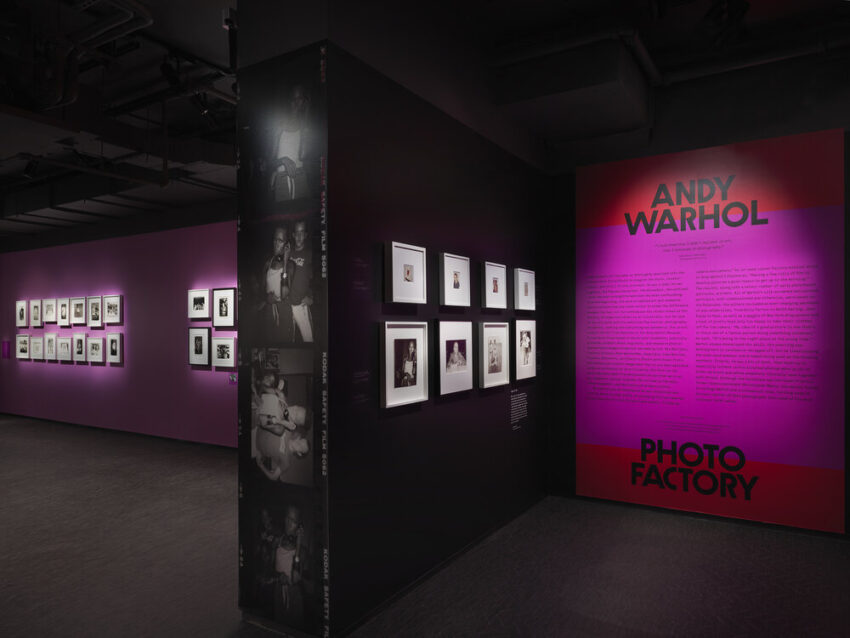 The Andy Warhol exhibit contains over 120 of Warhol’s photographs and four of his films. The formats of his works – with examples of polaroids, gelatin silver prints, polaroid collages, screen tests, photo booth strips, and stitched photographs – seem to present a mini crash course on the history of photography. 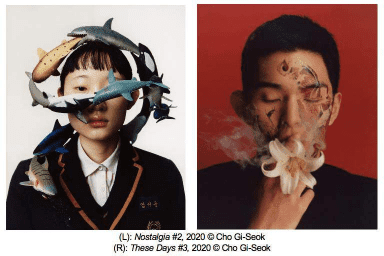 Two of the photographs on display in Cho Gi-Seok’s gallery Coexistance. The exhibition runs from December 10, 2021 to February 6, 2022.

And, of course, you can’t go to a Warhol exhibit without seeing at least one reference to a banana.

Gi-Seok’s background in graphic design and fashion photography means that many of his works play upon side-by-side comparisons of nature and costuming.

According to a press statement on the exhibit, he “conjures a refined atmosphere focused on harmony, purity, and symbolism, where beauty of the lines and balance between human and nature is essential.”

A Trip Advisor reviewer cited another exhibition, that of Martin Schoeller, being one of her favorite Fotografiska offerings. His “moving and poignant” work “[documents] photos and interviews of former prisoners who were exonerated from death row.”

Click here to see the current and upcoming exhibitions at Fotografiska. 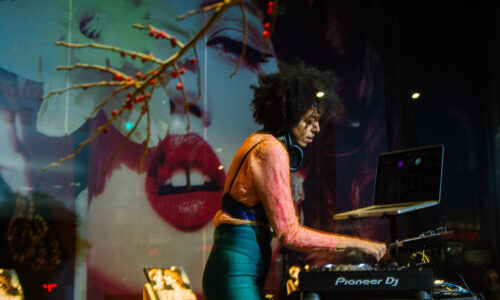 Stand-up comedy nights, musical performances, and even flower arrangement demonstrations are other options.

Entrance tickets to Fotografiska are $24 and guided tours start around $69. Due to the museum’s popularity, it is recommended to book e-tickets ahead of time.