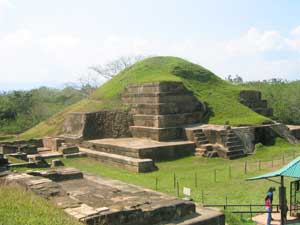 “I am thrilled! This is the first time that I will be seeing Mayan ruins,” my newly found Canadian friend remarked as our bus moved away from Decameron Salinitas, El Salvador’s many luxury seaside resorts.

“I hope that he will not be disappointed!” I thought to myself thinking of my research about El Salvador’s indigenous people‘s remains.

Numerous travelers have written that these ruins do not have much to recommend [them]. This was especially to be true this day – the evening before we had been informed that the El Tazumal, one of the most important of the Mayan ruins in the country was closed for renovation. 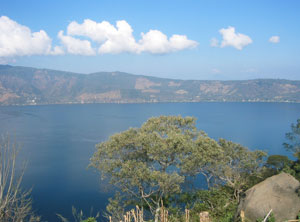 Our route took us through a fertile coastal plain that gradually sloped upwards. Soon we were traversing a landscape dotted with sugarcane fields that gave way to green wooded mountains.

At a high lookout point, we stopped to take photos and enjoy the magnificent vista of volcanic mountains and green rolling hills and valleys.

Onward, a few minutes later, we came to a halt – again to take pictures and enjoy the panorama below. Downward from the ridge on which we stood lay Lake Coatepeque at the bottom of a volcanic crater.

It is one of the most beautiful spots in El Salvador and is considered to be one of the ten most attractive lakes in the world. On the water’s edge, a number of beachfront hotels make the lake a popular Salvadorian weekend get-a-way.

“Notice the fantastic setting and colors. Nature painted a breathtaking postcard – planted a gem in our land”, our guide informed us as he waved his hand over the scenic view below us.

The Pompeii of the New World

Continuing on our way, we drove through a green countryside until we reached Joya de Ceren – a site where a Mayan village, due to a volcanic eruption, was buried by volcanic ashes for some 1,400 years until discovered in 1976. Called the ‘Pompeii of the New World’, it is a ‘World Heritage Site’ that gives us an exceptional look at a pre-Hispanic farming village.

Because of the remarkable preservation of the buried structures, an insight is provided into the daily life in the Mayan peasant world in its days of glory. Frozen in time, the village is the only one of its kind ever to be found.

Eighteen adobe homes, a communal bath, a communal meeting place, a shaman’s home and other structures have been identified, but only ten have been excavated. It is believed that its inhabitants were able to flee the village before the eruption since no skeletons have been found.

Artifacts in the museum at Joya de Ceren

Articles used in daily life such as ceramics, food, furniture, textiles, and utensils were uncovered and are now housed in a museum on the site. The structures present a conservation challenge and various ways are being tested to help protect them from the elements as had the volcanic ash cover done for hundreds of years.

After touring the uncovered structures and then the museum, we left and after a ten-minute drive, we reached the San Andres ruins – a ceremonial center with semi-excavated pyramids and other buildings.

Surveying the site, I was disappointed. All the structures appeared to be almost totally hidden. Only here and there some excavation had taken place. Most of the buildings were still deep green earthen mounds – in the words of our guide, “You have to use your imagination to visualize the Mayan pyramids and other structures!” 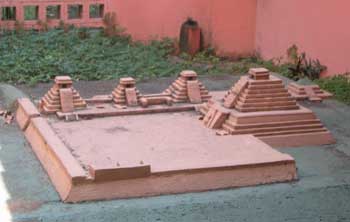 A model of the ruins at San Andres

Only the artifacts in a tiny excellent museum on the site tell somewhat the history of this once ceremonial center.

Joya de Ceren, San Andres and the Tazumal Mayan ruins at Chalchuapa, considered to be the best-preserved of all the El Salvadorian ruins, are the main Mayan remains in the country.

Although the great Mayan ruins of Mexico, Guatemala and Honduras appear more impressive and present a near picture of life among the ancient peoples, Joya de Ceren, San Andres and the Tazumal Mayan ruins at Chalchuapa are well worth a visit.

If not a clear picture-perfect panorama of the Mayan lifestyle due to the excavation still in progress, they are, at least, a glimpse into the history of El Salvador.

Leaving the Mayan ruins behind, we drove for half an hour to Santa Ana, the second-largest city in the country. Overshadowed by volcanoes and with green hills dotted with coffee plantations surrounding the city has much appeal to travelers. 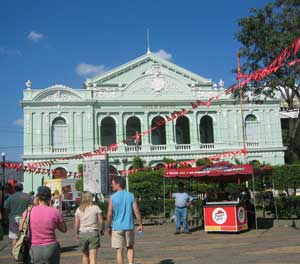 The theater in Santa Ana

We stopped at the main square in town edged by the impressive Gothic Cathedral and a fine-looking theater. The city has retained much of its colonial heritage and many examples of Spanish colonial architecture can be seen edging its streets.

After taking a walking tour in the heart of town to explore some of these historic remains we drove back to Decameron Saltinitas — our paradise in the sun.

It was now time to relax after a full day of exploring a countryside covered with an aura of scenic splendor and enhanced with Mayan ruins.

My friend seemed satisfied without a tour of the Mayan ruins. Without a doubt, they had given him the urge to explore the huge Mayan world in the neighboring countries. In his own words: “A taste of what is to come!”

1. Passports valid for at least six months are required of nationals from all countries, but for nationals from Canada, the USA and a number of other countries visas are not required for stays of up to 30 days. However, they must buy a Tourist Card for US$10, valid for 30 days, upon entry. 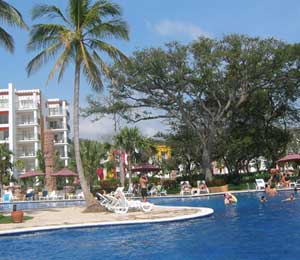 2. The colon, about 9 to a US dollar, was once the currency of the country but now it is rare.  The US Dollar is legal tender in El Salvador with a fixed exchange rate of 8.75 colones. The colon is still legal tender, however, it is no longer in circulation and is rarely used.

3. For hotels in San Salvador, check out TripAdvisor.

4. National specialties: corn tortillas; iguana, armadillo and Pupusa, a fried sandwich made of tortillas and filled with pork, cheese, and sausage – a popular meal consisting of rice, beans, meat, and salad. The cost of meals – budget: US$3-8; mid-range to deluxe: US$8-30.

6. The best time to visit San Salvador is during the dry season, from November to April when there are many cultural festivals.

7. The museum signs are virtually all in Spanish and there are few museum guides who speak English.

8. Remember a $34.86 Departure Tax is applicable when leaving the country.