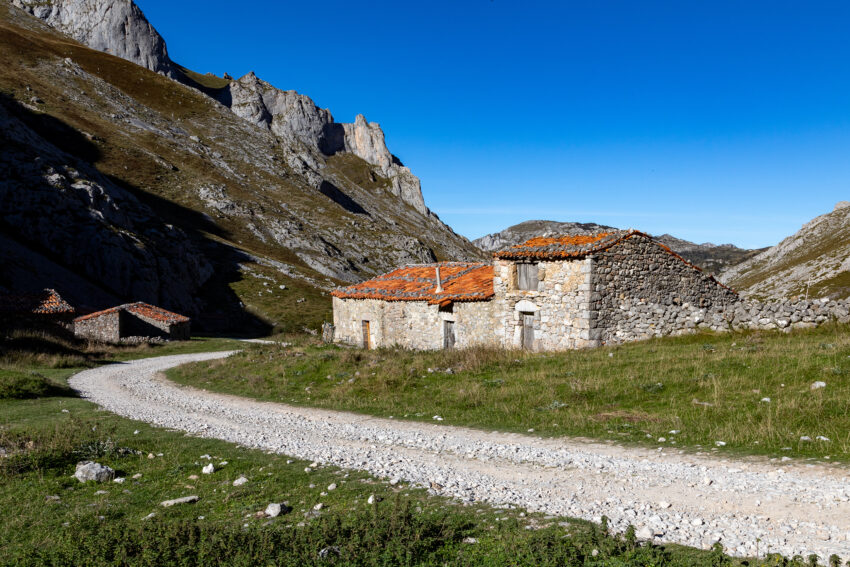 Asturias: All You Can Eat in Five Delicious Days

Fernando Abarquero, our guide, and owner of Pro Natura Sustainable Tourism downshifts then accelerates into another hairpin turn. We are driving through the mountains in the north of Spain in Picos de Europa National Park, searching for the origins of cabrales cheese during a journey to see and eat all we can in Asturias in five delicious days. 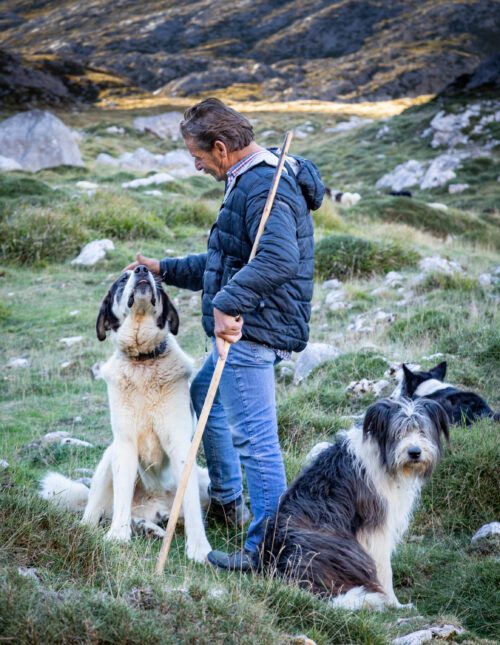 He was born here and knows these roads well. It’s the kind of road bikers and sports car drivers dream of. Fernando maneuvers the large four-wheel-drive van like a fat little Ferrari.

He waves to the occasional other vehicles as we pass them on the downhill or as they pass us chugging up incredibly steep inclines above the clouds. He owns this road, this place; it is in his blood. I trust him.

The road we were driving on was not paved until 1987. Local farmers only started selling for profit outside of their families subsistence farming in the 1970s, not that long ago in a rapidly overdeveloped world. There are 11 villages in the reserve.

Shepherds still roam the mountains with their flocks of sheep in a symbiotic relationship between people and their environment. But like the bears and the wolves, they too are endangered.

Fernando executes another precise curve and looks up the towering cliffs that border the road. “You see all the brush that is growing up there in the cliffs? When I look at it, I see fire. No machines can clear it, only the sheep and goats. As the number of independent shepherds declines, this is what happens.”

Shifting into four-wheel drive, Fernando veers onto a dirt road. “I have something special I want to show you.”  Valle de Avila

The road precariously winds its way through the Valle de Avila to Las Vegas del Toro, a small group of old stone buildings once home to 20 shepherd families.

Fernando says, “I think we are going to get lucky.” A lone shepherd accompanied by his 3 dogs leads his flock of Xalda sheep down from the mountain pastures. He is one of the last shepherds and his flock is some of the last of the 2000 left of this breed praised for its meat, wool, and high-fat content milk used to make the local cabrales blue cheese.

Fernando explains, “The pride of a shepherd is the genetics of his sheep. For hundreds of years, they have been passed on for generations.”

At the base of the mountain is a cave where the sheep will spend the evening accompanied by one of the dogs, a huge Mastiff wearing a spiked collar to protect his throat when fighting the wolves that come for the sheep.

There is also a cave with a thick wooden door where cheese is left to age for months. 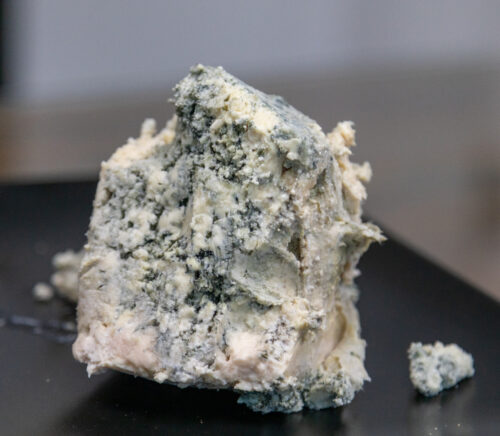 Cabrales cheese is a blend of unpasteurized cow’s milk and goat or sheep milk.  Salted then molded with holes in it to absorb the naturally occurring bluish-green penicillium mold found in these limestone caves.

The result is a cheese with a captivating, potent aroma, incredibly rich, a little sharp, and salty. It fills your mouth as it takes over all your senses, my eyes kind of rolled back up into my head.

In 2019 a four-pound block sold for over $22,787, making it the most expensive cheese in the world. Fortunately, you can feast on it for far less in almost any restaurant in Asturias.

The rural traditions of this mountainous region and of the coastal communities are the foundations of what makes the cuisine in Asturias so fascinating and delicious. It is food that cannot be made in a factory. The flavor of a unique environment.

Here are some of my favorite restaurants in Asturias, Spain.

When I had the chance to dine at Casa Gerardo and interview the father-son team of Pedro Morán and his son Marcos, Pedro had just been appointed ambassador for a new culinary effort by the state called “Landscape Gastronomy.” Marcos arrived a little late, after filming a documentary with local hero chef José Andrés. He is the 5th generation to cook at this Michelin star restaurant, founded initially as a roadhouse in 1882.

He brings some modern flair to his father’s dishes, but the commitment to their Asturian roots is predominant. 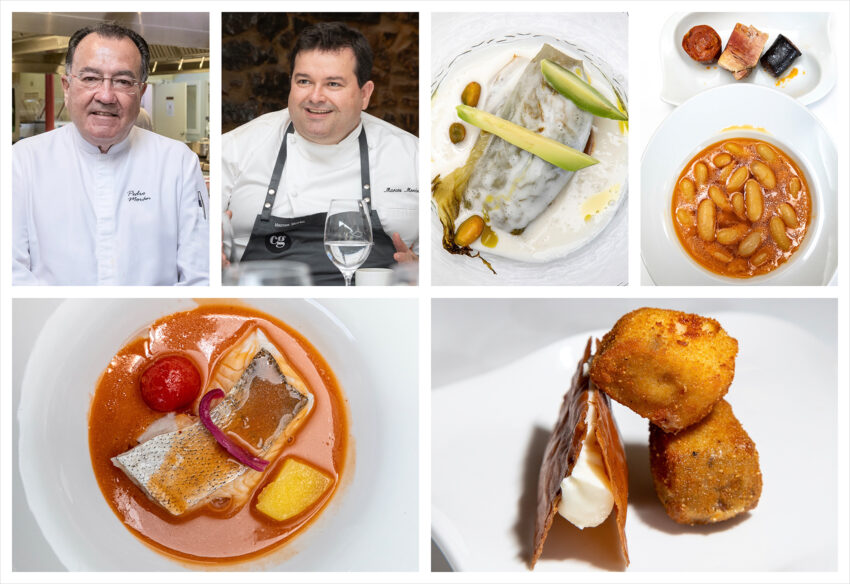 I asked him, “what is Asturian cuisine?” He said, “you have to look to the sea and cider orchards. The pork, sheep, and the cheeses. The milk from our cows. Hell, we are like the Wisconsin of Spain. And you have to try a free-range chicken, that is a must.” Then we talked about fabes, the local white beans.

Fabada is the national dish of Asturias. A rich, hearty stew of the local large white fabes beans, pork belly, chorizo, and morcilla blood sausage. Fabes have a high-fat content, are plump, creamy, and absorb flavors well. Marcos said, “if you cannot find the skin of the bean in your mouth, it’s done right and will melt like butter. “We use fresh, not dried fabes from individual farmers and freeze them. October is the best time to eat fabada.”

I tried many fabadas over the week, mostly from dried beans. The difference is subtle, but I must admit, the fabada at Casa Gerardo is the one that still haunts me.   Casa Trabanco

Asturian culture is fueled by cider. They have been making it here since Roman times. Hundreds of varieties are grown, but only a few are officially approved for cider production. 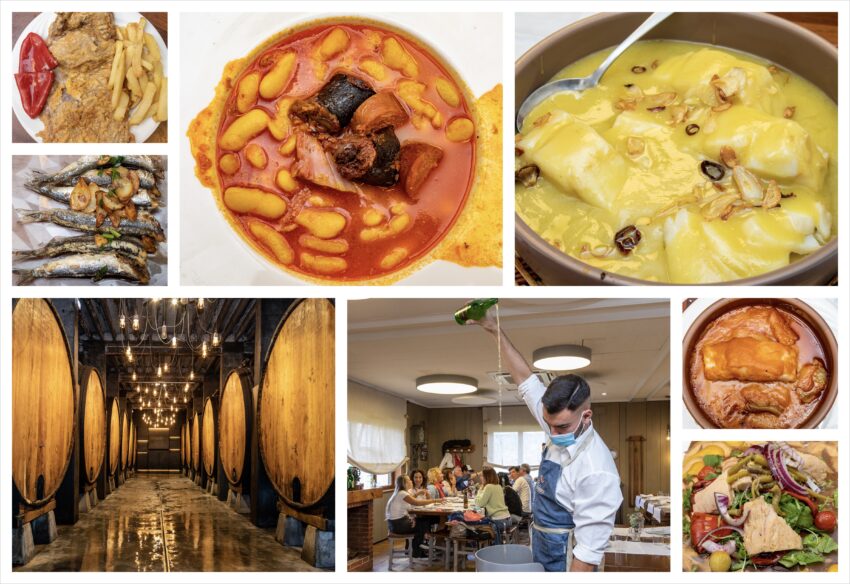 Over 80% of cider in Spain is produced in Asturias; Trabanco is the most recognizable brand in Asturias and in the rest of the world. I am drinking a glass as I write this at my home in Massachusetts.

Slightly sweet, a little bitter, funky and refreshing, Asturian ciders are fermented by naturally occurring yeasts and not carbonated.

Casa Trabanco cider mill has been producing since 1925 and remains in the same family. Tours of the production and old railroad tunnels where the cider is fermented are available.

They have an excellent restaurant with impressive traditional offerings, and of course, waiters roam the room to fill your glass, holding the bottles high above their heads to pour into a glass by their knees to aerate the cider.

Cider perfectly complements the often rich and savory Asturian cuisine and is reasonably low alcohol, so you can drink at will. 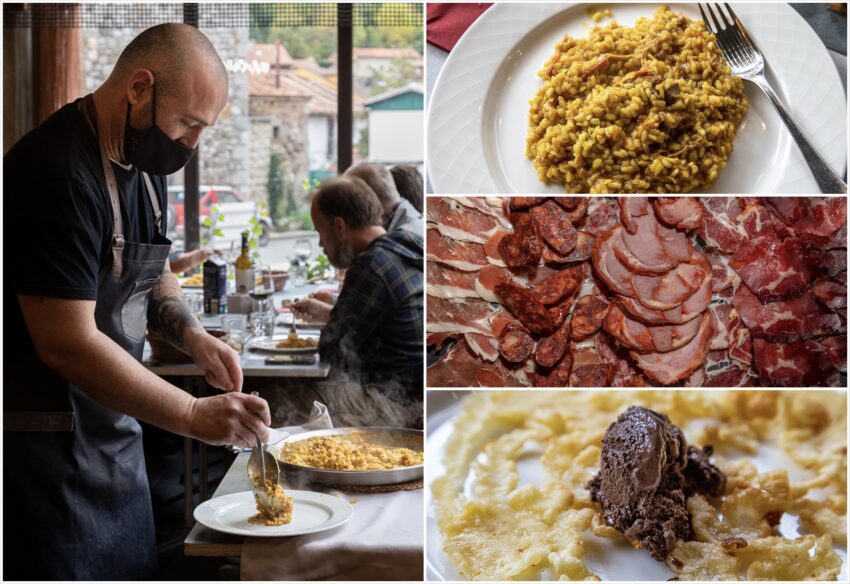 A word about cachopo. From where and when it came to Asturias is up for some debate but is considered a classic Asturian dish. It resembles a cordon bleu: two pieces of veal, sandwiching a ham and cheese center, breaded and fried. It has to be huge, preferably hanging off the sides of the plate. Asturians love Cachopo.

They get a little dreamy talking about it and dive in with a giddy cult-like smile. It’s a good late-night drinking food, but honestly, I could feel my arteries clogging with each bite. To each their own.  Castillo del Alba

Located in the center of bear country in the national park, this cozy 15 room hotel and restaurant provided some of the best meals of this trip. Chef Oscar Lobato prepared the traditional Asturian dish; Pitu de Caleya con arroz. (chicken and rice) Pitu de Caleya is a free-range chicken (road chicken), prepared paella style in a wide flat man with bomba rice.

It’s a tough bird that should be marinated overnight and braised for 3 hours over low heat. The result is a juicy, naturally dark- lean meat with a unique concentrated flavor. Super delicious.  Bar  Camacho 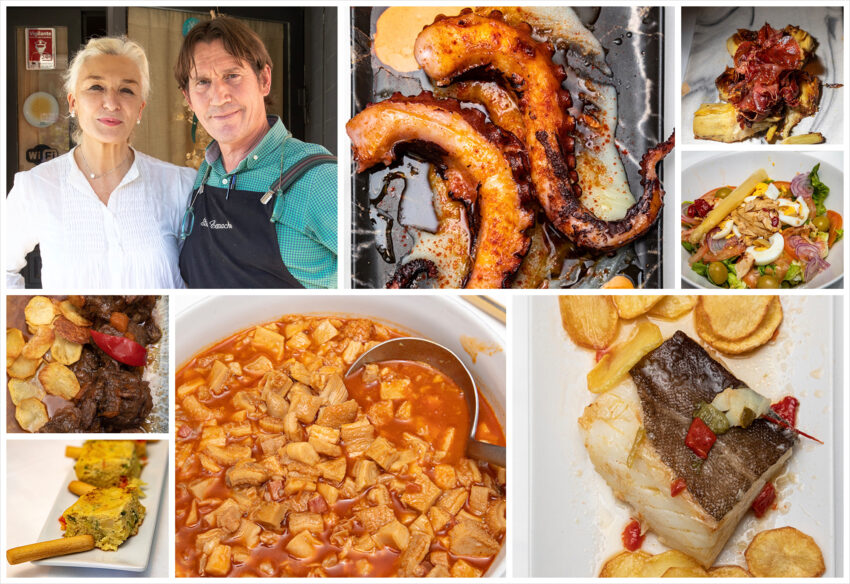 Arriving at Bar Camacho, located just off the highway, I thought we might be in the wrong place. An unassuming door leads you into a small dark bar with a few locals drinking cider. In the rear is a door to the small kitchen where chef Teresa Cmancho works her magic.

The only way to the dining room hidden in the back is to squeeze around her. There, you will find a delightfully adorned little room with only six tables. It was abuzz with locals. Good food makes happy people, and these folks were ecstatic.

The meal started with grilled octopus, tortilla de papa, and grilled artichokes topped with crispy ham. Then a fresh Asturian salad with tuna and white asparagus. I tried the hake, braised oxtails, and became an official devotee after trying her old family recipe tripe.

Bar Camancho was hands down the best overall meal I had in Asturias. That is saying a lot when every meal was pretty damn amazing.  Casa Lin

The famous Asturian chef José Andrés brought the late Anthony Bourdain to Casa Lin for lunch is just one testament to how good the food is at this traditional restaurant. It’s the kind of place they both loved. A local’s place where neither the people nor the food is overdressed, they are naturally full of character and need little adornment.

He brought him here to show him the real Asturias, and that is precisely what I found. 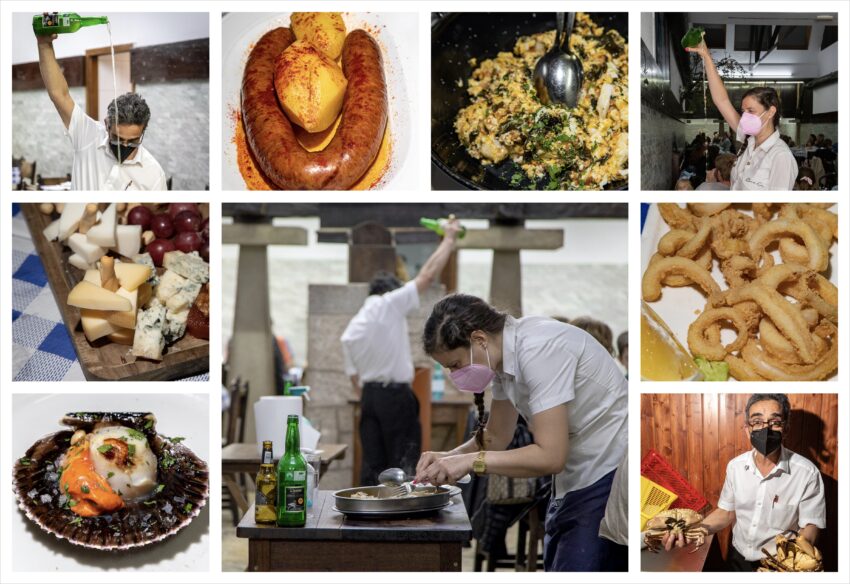 The bar in front was packed with locals and loud. I never saw any seating along any bar in Asturias; people stand and talk. The floor had a coating of sawdust, a tradition for all siderias where it is customary to throw out the last dregs of a glass of cider to clear the sediment.

The dining room in the rear was filled with families. Waiters were doing double duty serving platters of steaming seafood and pouring cider for all the tables from high above their heads while staring you in the eye. They never looked at the glass, never. 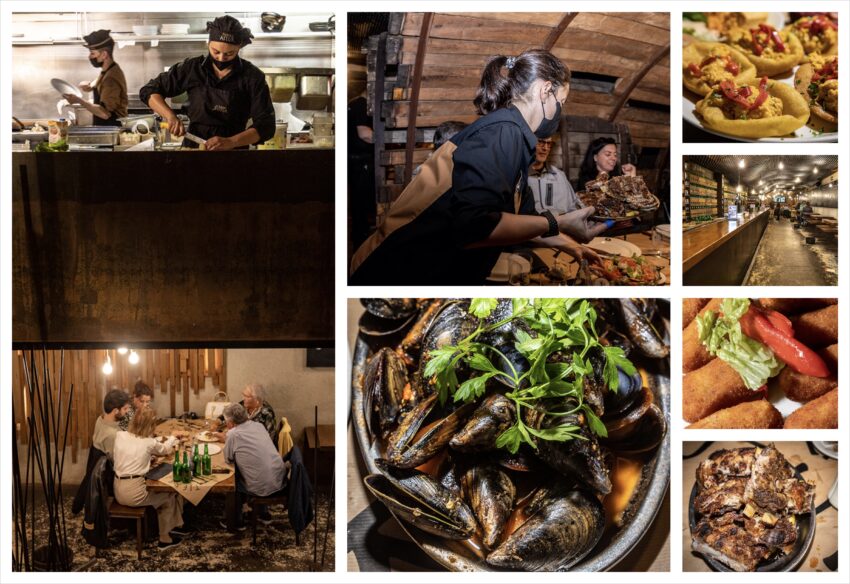 Avilés is a port town, and as you would expect, the seafood was classic Asturias: calamares fritos. (calamari), fried monkfish, scrambled eggs with sea urchin, and Zamburinas on the half shell with butter, lemon, and parsley. Zamburinas are similar to scallops but 3 times smaller, more flavorful, tender, and sweeter. Add a cheese plate with Cabrales, chorizo sausage braised in cider, and about 3 bottles of Trabanco. This is a must-eat destination if you are in Avilés.

Tierra Astur is a group of six restaurants spread out amongst the main cities of Asturias. It’s a bit “Disneyland “with cider barrel dining tables and a menu that resembles a garish home shopping network catalog, but they are successful for a reason; The food is damn good. Even if it feels somewhat like an Asturian theme park.  Eseteveinte

One of the more upscale restaurants I dined in Asturias, Eseteveinte describes itself as a fusion gastronomic tavern. Fusion is one of those cliche culinary terms that is usually a warning sign for me to walk out the door.  I am glad I did not. 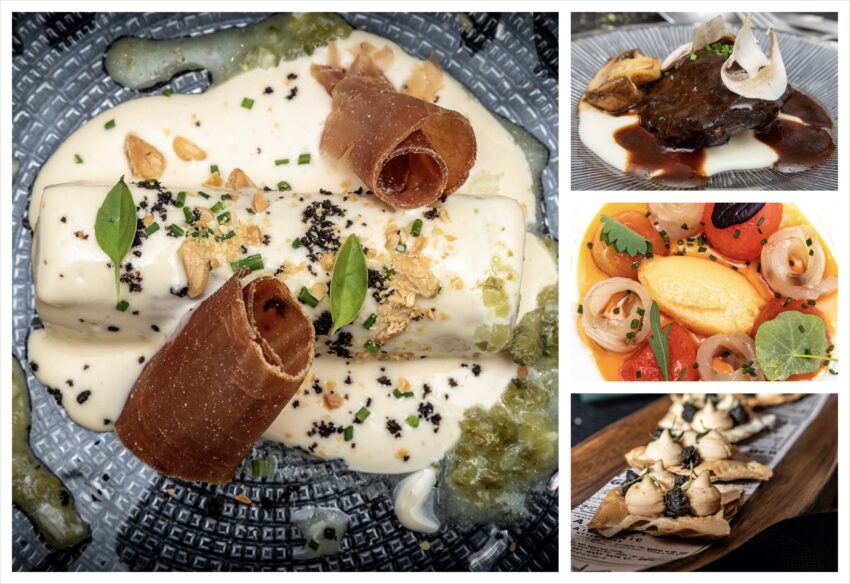 It is a delightful/friendly little restaurant bar that is genuinely producing some fantastic flavor combinations, artistically presented, and a killer selection of wines and liquor.

I had been so focused on experiencing the “real Asturias” I almost missed appreciating what was really happening with young chefs putting their stamp on the beautiful Asturian culinary scene.

I had lunch in this family-owned rural hotel/restaurant in the mountains of Pico de Europa in Sortes, the highest village in the Cabrales region. There is outside seating, a small bar, and a rustic, comfortable dining room. 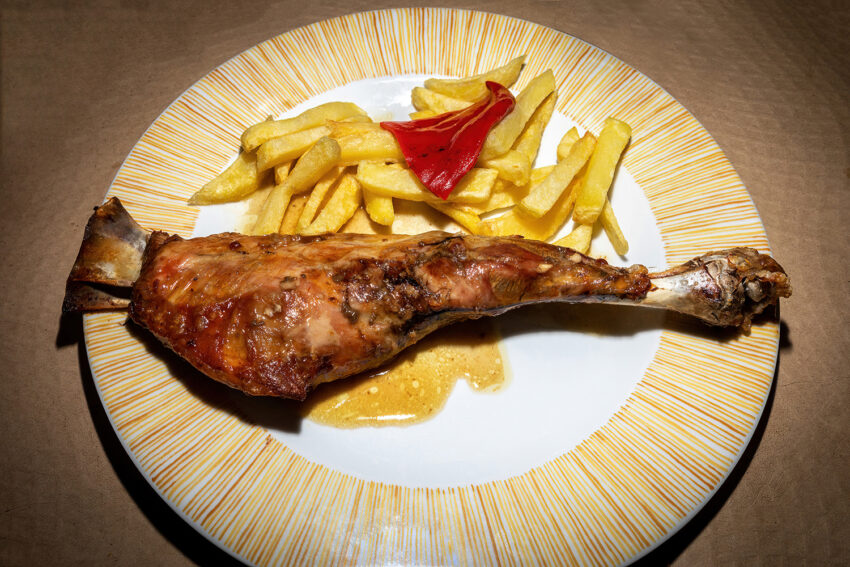 he croquetas de jamón and goat cheese salad were fantastic, but the roasted leg of lamb was huge and outstanding. Local young lamb presented sparsely with just a side of potatoes. Perfect.

This story was made with assistance from Asturias Tourism, but the opinions are the author’s own.