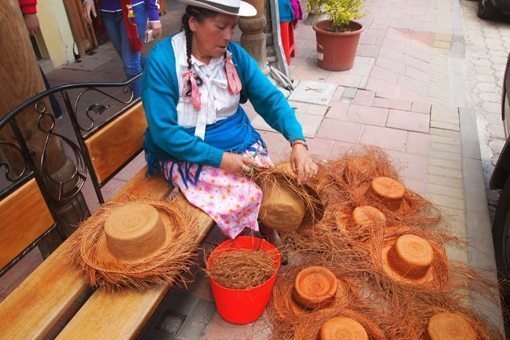 Cuenca, Ecuador: A Place to Retire Tomorrow But Enjoy Today 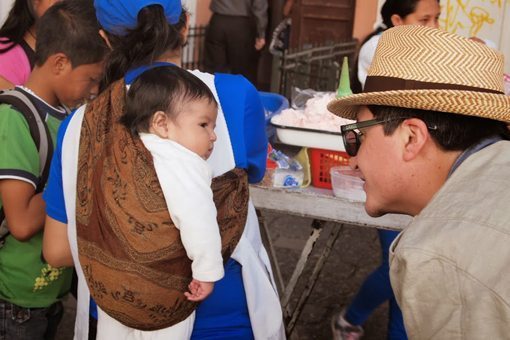 Saying hi to a papoose in Cuenca.

There must be a good reason why between than 4,000 North Americanos now call Cuenca Ecuador their adopted home.

Most of the wave began several years ago when International Living and other outlets declared this city of 400,000 to be a perfect place for retirement.

It’s at 8200 feet, there are clean rivers running through the city, and flowers, blooming trees, and historic colonial architecture are everywhere, alongside nice walking streets and plazas.

It feels safe and there are lots of students who attend a big university in the city.

It’s not hard to see why so many ex-pats love Cuenca. Though on our visit we didn’t hear many American accents, the wave has had an impact on Ecuador’s third-largest city.

Concentrated in a leafy section of Cuenca, the high-rise condos sit beside the fast-flowing Rio Tomebamba that’s filled with trout. It’s one of four rivers that wind their way through this historic city. 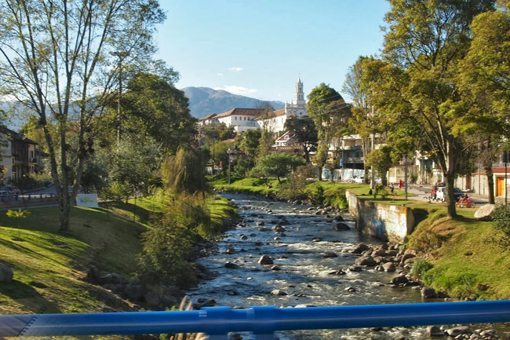 The Rio Tomebamba, full of trout, is one of four rivers running through Cuenca, Ecuador. Photos by Max Hartshorne.

There are big plans to make Cuenca attractive to even more American and Canadian ex-pats in the years to come.

But officials say you better come now because of the generous tax rules that allow foreigners to own houses here (unlike in Mexico where most people lease land and buildings but don’t own them). 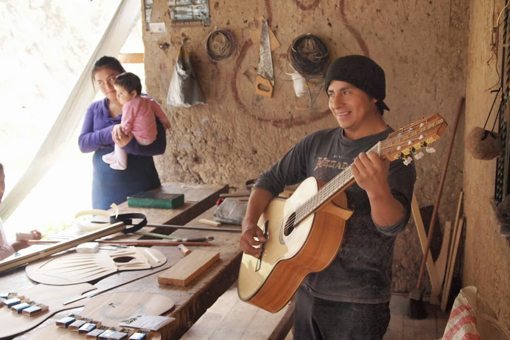 Guitarmaker Santiago Uyaguari follows his father’s footsteps in the business.

Today, Americans don’t have to pay taxes on their social security and many ex-pats say they live comfortably for less than $2000 a month!

Ecuador is blessed with natural resources like oil that contribute mightily to the government’s coffers. A result is a spending spree that’s going to invest billions in new roads, new railroads, a newly opened tourist train from Guayaquil to Quito, and millions of dollars in marketing to bring more tourists.

One government official told me that the goal is to bring Ecuador’s average wage closer to what the citizens in Colombia and Chile enjoy.

Cuenca is a beautiful colonial city if you can see past the hundreds of blue city buses that never seem to stop getting in the way of a pretty street scene. A large number of locals need to take the buses to get to work at the many tire factories and other industrial employers just outside of town. This is one thing that can mar the scenery, but there is a solution coming.

In 2020, the city’s tramways began running, providing sleek and affordable trains to replace the small buses The 10∙7 km line starts at Río Tarqui in the southwest, and runs through the city center to Parque Industrial with a total of 27 stops.

These streets were first laid out by Spanish conquerors in 1550, and that means narrow streets. When the buses come by, pedestrians used to have to run off the sidewalk to avoid being knocked over.

In Ecuador, one of the most lasting visual symbols on people is the Panama hat. You see them everywhere, mostly on short native women selling snacks and clothing on the street. But just as often, a tall dapper dude will walk by wearing a sharp-looking Panama. 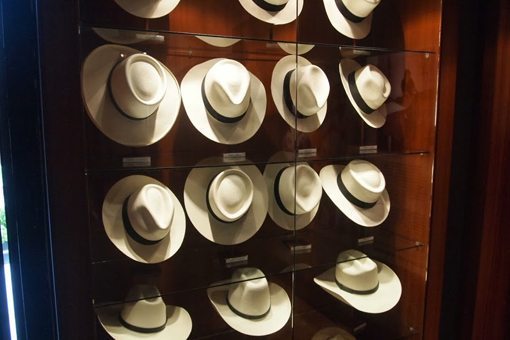 You can visit the Homer Ortega hat factory where hundreds of these hand-woven hats are made every day in downtown Cuenca.

The Sombrero tour begins with a real live indigenous woman weaving the reeds in a replica of a jungle hut, with her real-life tot by her side.

To make the vastly more expensive superfine weave hats, the reeds are split again to make a much finer weave.

These are sold to movie stars and salsa recording kings—in the showroom one was selling for $1000. The typical Panama hat will set you back about $25 and they have wider models for women along with the fedora and pork pie style too.

The process of weaving, dyeing, drying, shaping, and finishing the hats take about 12 days, the tour brings you close to each process in the long chain. It ends, of course in the showroom where you can pick out your favorite Panama and walk out with a shipping-ready box. 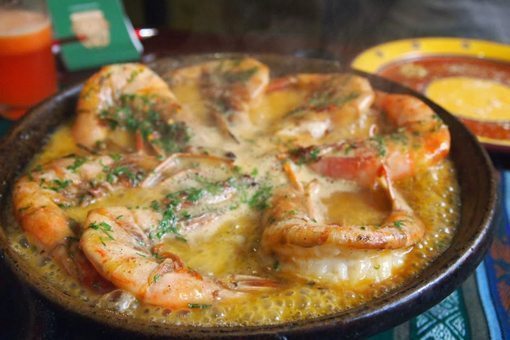 Sizzling langoustines at Tiesto’s in Cuenca.

In the distance from just about anywhere in Ecuador, you’ll see giant volcanoes, most of which are now dormant.

But the power that made these mountains is still bubbling down below, and we visited a hot spring resort that takes full advantage of a torrent of steaming hot water to heat a series of pools and spas.

It is called Piedra de Agua, just ten minutes from the city. A great place to relax in your choice of large, small and super hot pools, plus a nice bar and restaurant.

One of Cuenca’s biggest hotels is the Hotel Ore Verde Cuenca, which is comfortable and like most hotels here, not expensive. That’s got to be one of the highlights of Ecuador—not only can you use American money, nothing costs that much.

Especially cheap are taxis, you can get from one side of the city to the other for $4-5 max. They rarely turn on the meters, you just negotiate with them and watch in awe as the driver holds up a few fingers signifying the meager fare.

Nights at the Ore Verde range from $98-130 per night, will all of the services you’d expect of a top-notch small chain. This hotel is located out of the center of the city, a short drive. 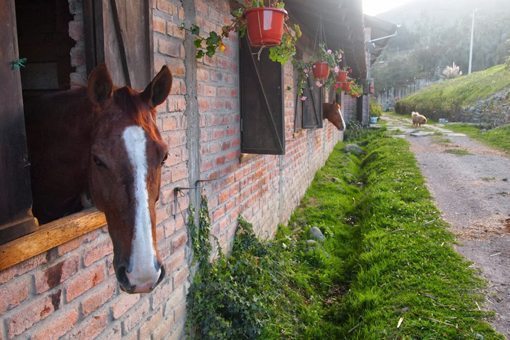 At the horsebarn, one of the 60 steeds of Hacienda Caballo in Cuenca.

The city’s historic center is built around the city’s big main plaza San Sebastian Square, where old and new churches face each other and people congregate under the huge pine tree planted decades ago by early settlers.

The favorite dish in Cuenca is served on Sunday afternoons—a whole pig cooked using blowtorches or in an oven.

I was hoping to get another bite of the wonderful corn cakes that are grilled by native women in the countryside, but I was told that here in Cuenca, corn cakes are not served. But boy, that pork with the fatty layer is pretty tempting!

We stopped into a popular restaurant called Tiesto’s, where chef Juan Solano creates what he calls Cuenca fusion cuisine. He brought out a platter of chicken curry with coconut and nuts, then another with beef rounds with a spicy tomato sauce.

Couscous and mota, giant corn kernels served everywhere in Ecuador, rounded out the meal. Another day we had lunch here and the highlight was a giant steaming bowl of langoustines in a yellow garlic sauce, which was heavenly. Chef Juan is also an artist–he paints the dessert plates with ornate decorations using edible paints that look too pretty to eat. 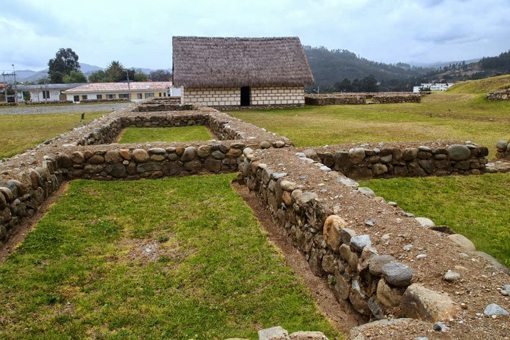 Pumapungo Archeological Park in Cuenca, where Inka ruins can be explored.

For our final nights in the city, we drove out of town to the Hosteria Caballo Campana, about 15 minutes from the center of Cuenca. Despite this easy distance from the city, this lovely small hotel is a refreshing country retreat with views of the city and a very large horse barn and riding arena full of activity.

The managers here are a young couple who met in college in Argentina where they majored in hotel management. Priscila Saldana de Traversa and Fernando Traversa. 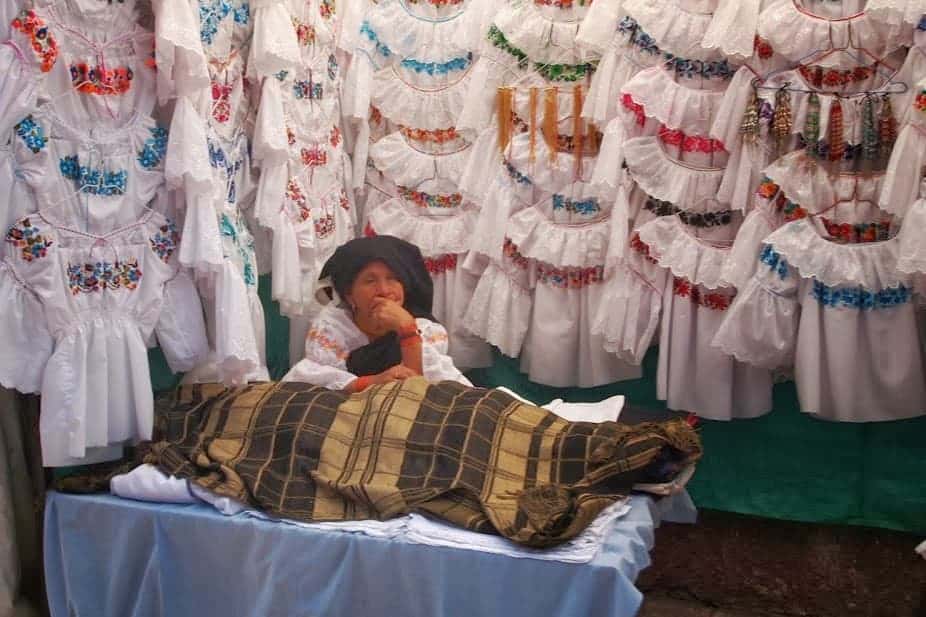 Dress vendor at the Indian Market in Otavalo, Ecuador.

This young couple is very fond of horses, here at the Hosteria there are 60 steeds, and there are plans to build another large arena on land they’re filling in at the edge of the property. We walked down to the arena where four youngsters were jumping wooden jumps, each time the bar being raised by their Argentinian instructor.

There are 18 guest rooms at the Hacienda, each decorated with paintings of horses, and each with its own cozy woodstove to keep the chill away. Guests can take horse rides in the country and do dressage in the arena. There is a big set up for weddings and a cozy restaurant called Baraban, featuring Ecuadorian food.

Fernando told us about how many of the guests come here who enjoy horses and riding. But it’s not only for equestrians, it’s a warm country inn with dogs running everywhere and plenty of cold beers in the fridge for the guests. This was once a private home, owned by Priscila’s grandfather. Today it’s in very good hands with these two young well-trained hoteliers.

Ecuador is poised for tremendous growth in tourism, and now is a perfect time to see this country that offers so much in a small area.

There are mountains, rainforests, pristine beaches, historic cities, and in every place, friendly locals who welcome you. Ecuador is ready–are you?

Read another story by this author, Horseback Riding in Otavalo Ecuador