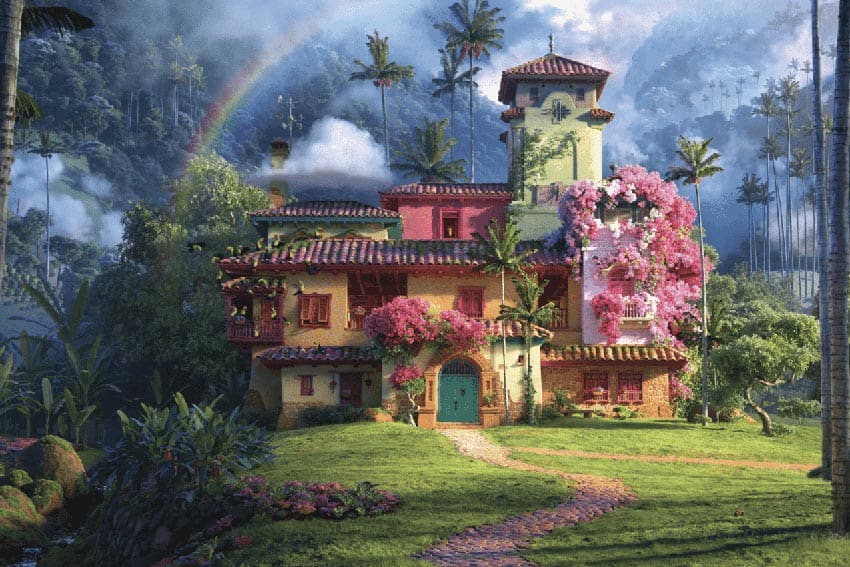 The anthropomorphic house from the Disney film Encanto comes to life in Colombia’s Cocora Valley. Image courtesy of Disney. 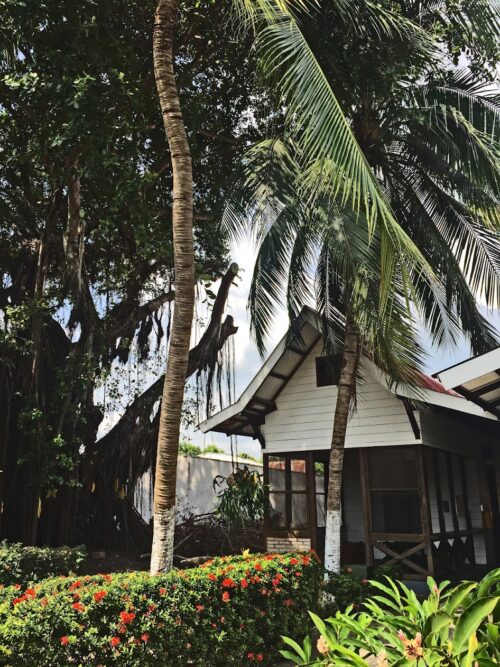 At its core, Disney’s 60th animated film Encanto is a story about family relationships.

But when it came to selecting the ideal backdrop for the film, the creators found inspiration in Colombia, a diverse South American nation with a mix of cultures, traditions, people, geography, flora, and fauna.

The magic surrounding Colombia is woven seamlessly into the storyline about three generations of the Madrigal family, who have been blessed with mystical powers.

To prepare for the production, filmmakers Byron Howard, Jared Bush, and Lin-Manuel Miranda, along with anthropologists and experts in music, botany, architecture, language, and more, toured regions of Colombia to help depict it accurately.

They visited the big cities of Cartagena and Bogotá and smaller towns like Barichara, San Basilio de Palenque, and Salento—the town closest to the verdant Valle de Cocora and its towering wax palm trees.

While they saw only a fraction of Colombia’s incredible places, they were charmed by what they did see, admitting that magic “runs in the streets.”

Want to take an Encanto-inspired trip to Colombia? Here are some magical places to visit:

Quindio wax palms cover the hillsides of Colombia’s Cocora Valley, the stunning setting selected to be the home of the Madrigal family in the Disney film Encanto. Photo by Laura Watilo Blake.

The Cocora Valley is one of the most beautiful places Encanto’s team visited on their research trip, says the film’s director Jared Bush in a recent video posted on Disney’s official YouTube page. “We knew this is where the home of the Madrigals should be.”

The area is noted for its famed wax palms, which can grow up to 200 feet tall. Spread out on the verdant Andean foothills within the Parque Nacional Natural de Los Nevados, the trees look like lit sparklers on the Fourth of July with their long skinny trunks topped with an explosion of palm fronds. Hiking and horseback riding are the most popular ways to explore the valley.

How to get there: The closest airports are located in Armenia and Pereira. From either city, it’s about 40 minutes by taxi to the quaint colonial town of Salento, where most people stay if they are heading into the Cocora Valley, just seven miles away. Jeeps, locally known as Willys, depart from the town square once they are fully loaded with passengers. 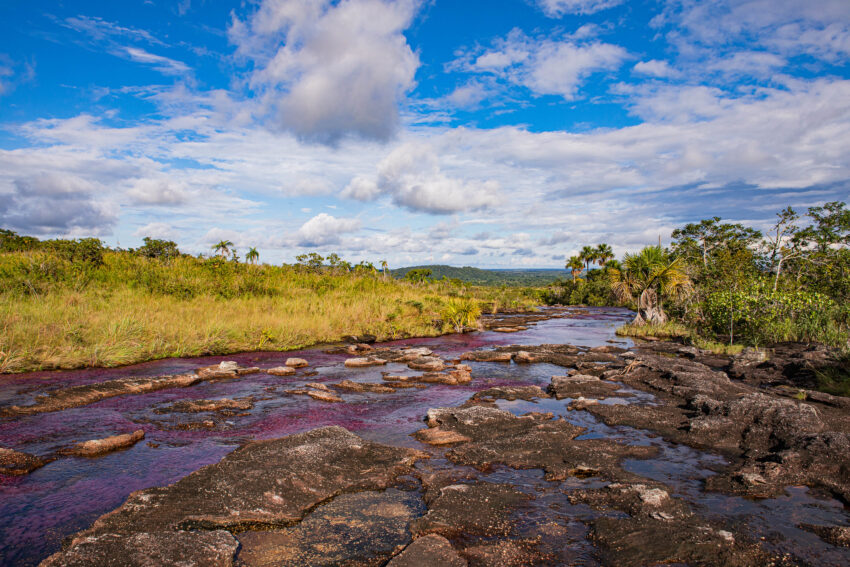 Nature puts on a spectacular show at Caño Cristales, also known as the river that “ran away from paradise.” Photo by Laura Watilo Blake

Early in the film, one of the world’s most unique waterways, known as Caño Cristales, figures prominently in the Madrigal family’s origin story. Located deep in a remote corner of Colombia, where the plains meet the Andes Mountains and the Amazon, this magical river bursts with color between the rainy and dry seasons.

For half the year, it looks like any other waterway, but from June to November, the tributary of the Guayabera River bursts with brilliant hues thanks to a rare aquatic plant known as clavigera macarenia. When the water level is just right, the plant turns the river red.

Located in the Serranía de la Macarena National Park, this stunning and unique place has earned many nicknames, such as the Liquid Rainbow, the Melted Rainbow, the River of Seven Colors, and even the River That Ran Away from Paradise.

How to get there: Satena Airlines is the only airline that flies directly to La Macarena, the closest town to Caño Cristales. The airline offers three-day, two-night packages that includes airfare, hotel, tours, guides, permits, taxes and meals. 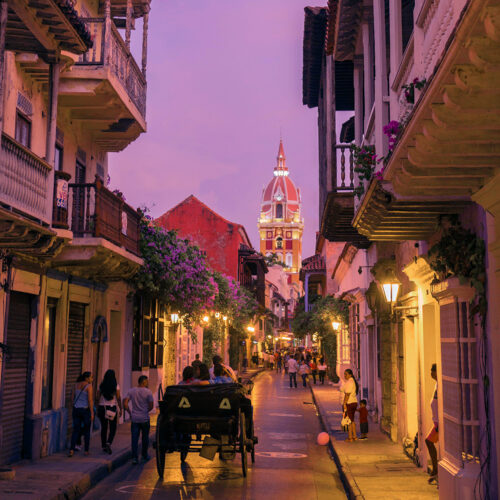 The clopping sound of horse hooves echoes off the buildings that line the narrow passageways in Cartagena’s Old Town. Photo by Laura Watilo Blake.

Cartagena is a modern port city on the Caribbean Sea with world-class cultural events and chef-driven cuisine inspired by its indigenous, European, and African influences. It’s also one of the most most beautiful, well-preserved colonial cities in South America.

The colorful anthropomorphic house in Encanto borrows its look from the architecture found there, not to mention smaller Colombian villages like Barichara and Salento.

When you pass through the fortified walls into the Old City, the modern world slips away. You’ll find yourself wandering through a maze of narrow cobblestone streets lined with 400-year-old homes with balconies draped in bougainvillea.

Duck into a hidden courtyard café for a coffee or cocktail and tour the Old City by horse-drawn carriage.

How to get there: Cartagena is served by direct international flights. 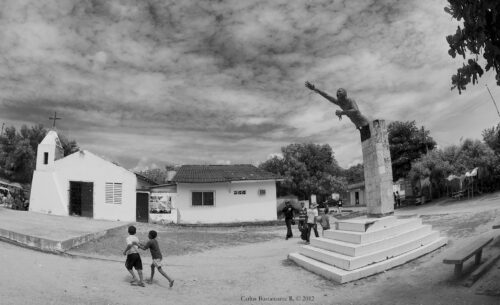 If you’ve been to Cartagena, you may have noticed the colorfully dressed women selling fruit and handmade treats from hand-woven baskets balanced on their heads. They are Palenqueros who hail from San Basilio de Palenque.

Located a couple of hours outside of Cartagena in the foothills of the Montes de Maria mountains, this town was the first in all the Americas settled by refugees of the slave trade.

In 1691, they signed a royal declaring their independence from Spanish colonial rule.

Due to their self-imposed isolation, the villagers developed their own unique language, believed to be a cross between Spanish and a Bantu language originating in central Africa.

The village has been named as one of the Masterpieces of the Oral and Intangible Heritage of Humanity by UNESCO because of its unique language, food, and music traditions.

How to get there: From Cartagena, book a Palenque Freedom Tour, which includes transportation, a typical Palenquero lunch, a local guide, and traditional dance and music. 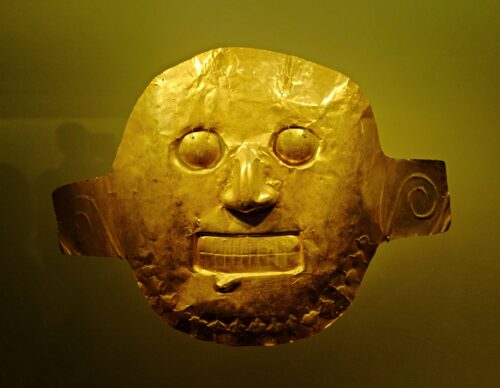 The Museo del Oro in Bogotá has the largest collection of pre-Columbian gold artifacts. Photo by Reg Natarajan via Creative Commons license.

However, Bogotá has many important cultural institutions that preserve the history, art, and heritage of the nation, which makes it a great place to begin an education in all things Colombia.

The National Museum of Colombia is one of the oldest museums in the country and the entire continent. Its imposing fortress-like stone building houses more than 20,000 objects that range from indigenous artifacts that predate European contact to 20th-century Afro-Colombian art to modern paintings by living legend Fernando Botero.

The Museo del Oro displays the largest collection of pre-Columbian gold relics. Here you’ll discover that the legend of El Dorado is not just a mythical place that fueled the Spanish obsession with gold in the new world.

El Dorado was the name for Muisca tribal rulers whose rites of passage included being covered in gold dust and floated to the middle of Lake Guativita alongside his servants who carried baskets filled with glittering offerings for the gods in the depths of the sacred lake.

To learn more, the Bogotá Tourism Office recently launched El Dorado Legend Route, which offers tours and experiences for people who want to take a deeper dive into the legend.

How to get there: Bogotá’s El Dorado International Airport is the main international gateway to Colombia. 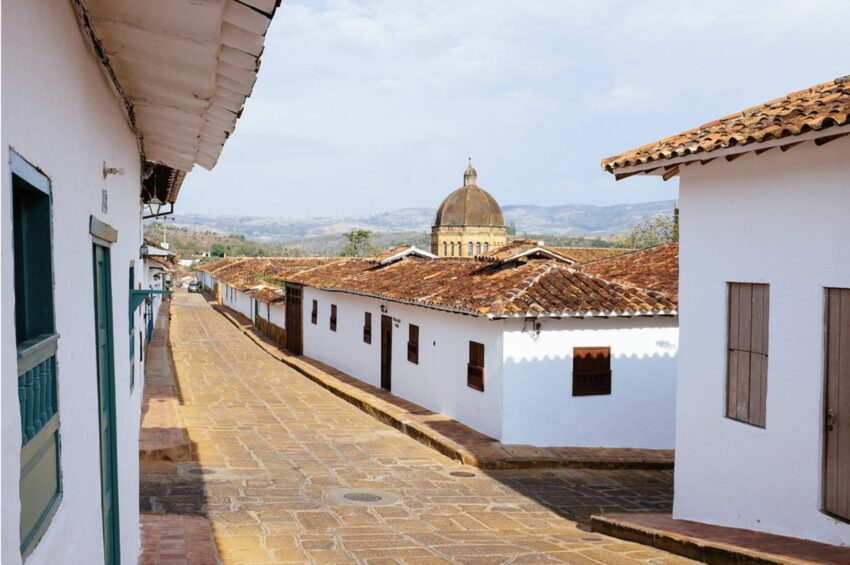 Barichara is one of 17 towns in Colombia noted for its well-preserved colonial architecture. Photo by Andreas Philipp via Creative Commons license.

Barichara is a small village in Santander that feels like it’s been lost in time, and that’s exactly what Encanto’s director wanted the setting to feel like in the animated film.

The town is not exactly undiscovered as it is one of 17 preserved heritages towns recognized by Colombia for its cultural heritage. Considered “the prettiest town in Colombia,” Barichara was founded at the height of the Spanish Empire in the new world.

Its cobbled streets and whitewashed buildings with red-tiled roofs are splayed out on a ridge overlooking the Suarez River Canyon. You can spend hours exploring the town and visiting both the Mirador de Barichara and the Salto del Mico for excellent panoramic views overlooking the valley below.

How to get there: The closest airport is in Bucaramanga. There is no direct bus to Barichara, so it’s recommended to transfer in San Gil—considered the adventure capital of Colombia. The journey takes around 3-4 hours. 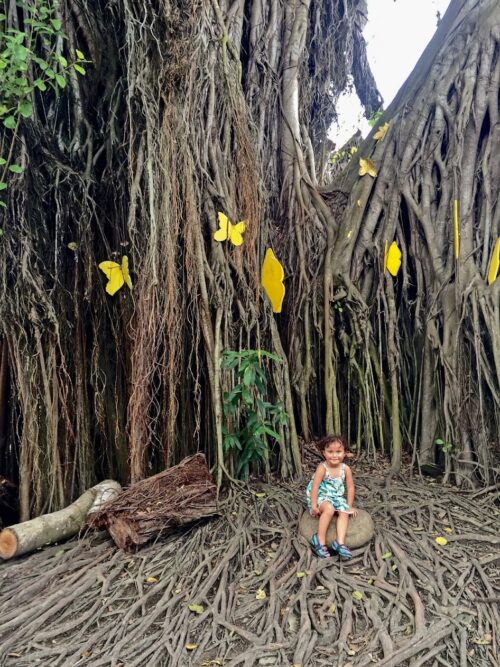 Yellow butterflies, which appear throughout Encanto, are an undeniable tribute to one of Colombia’s most venerable and influential authors, Gabriel García Marquéz, who hails from the hot and dusty town Aracataca.

Located just under two hours south of Colombia’s Caribbean Coast, Aracataca served as the blueprint for the fictional setting in the author’s most famous novel, Cien Años de Soledad (100 Years of Solitude)—an epic tale of seven generations of the Buendía family that blends real history with mythology and legends.

Gabo, as the writer is known affectionately by his fans, was inspired in part by the stories told to him by his maternal grandparents with whom he lived until the age of eight.

Their home on Carrera 5 has been faithfully recreated on its original site and opened as the Casa Museo Gabriel García Marquéz.

A tour of the property includes several rooms and outbuildings that are characteristic of early 20th-century Caribbean dwellings, each of which is linked to Gabo’s writings in some way.

Yellow butterflies, a recurring motif in Gabo’s stories, can be found adorning the bushes, trees, and walls of the house and other spots around town.

How to get there: The closest city with an airport is located in Santa Marta. Direct bus service is available from there or Barranquilla. 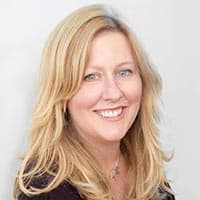 Laura Watilo Blake of farflungtravels.com is a travel photographer, documentary filmmaker, and journalist based in Cleveland, Ohio.  In the last decade, her adventures have included hang-gliding in Rio, traversing the Sahara Desert by camel, and trekking in Bhutan. Her best adventure yet has been raising her Colombian-born daughter, who has inspired yearly trips to her birth country.