Camden Maine: Going Down to the Sea in a Schooner 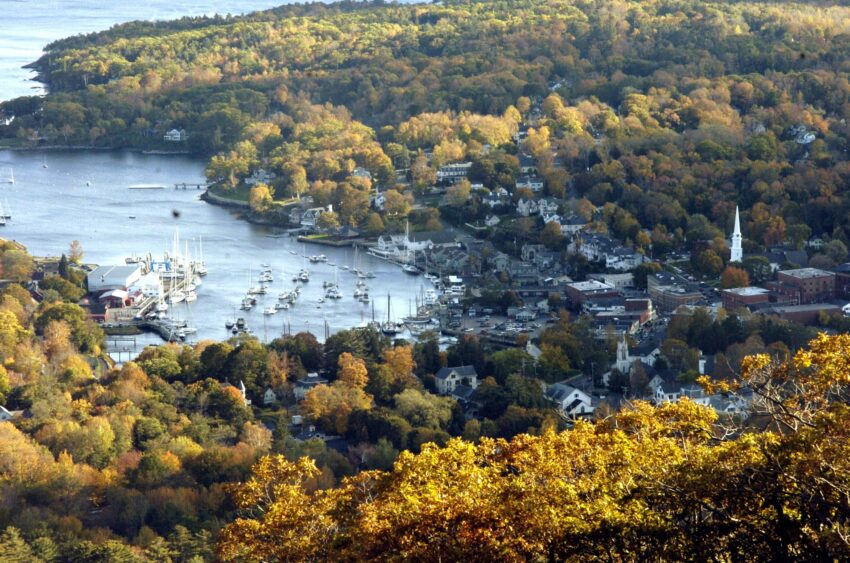 The Timeless Appeal of Camden, Maine and its Maritime History 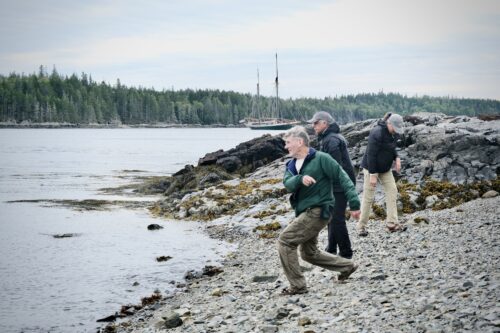 Skipping stones in Camden, on the Maine Coast.

Camden Maine is often called the jewel in the crown of the coast. It’s picture postcard-worthy with its eye-catching church steeples, stately parks, and walkable High Street Historic District.

The town is set right next to the cozy harbor of west Penobscot Bay, with a cascading waterfall pouring down the rocks into the quay. It would be hard to find a more peaceful and beautiful cove than the one that anchors Camden, Maine.

At the Foot of the Camden Hills

The coastal village community is situated at the foot of Camden Hills. It contains a graceful, large windjammer fleet, historic Victorian inns, and a picturesque waterfront that no Hollywood movie set could ever match.

The town of Camden Maine has always been inextricably linked with sailing. Many mariners consider it one of the best cruising bays in the world.

For more than 200 years, the harbor has been alive with vessels of every type, from pleasure yachts to lobster boats. Tall-masted Schooners are docked right near town. With shipbuilding, fishing, lobstering, and those who come here to enjoy it by boat, Camden is forever tied to the sea. 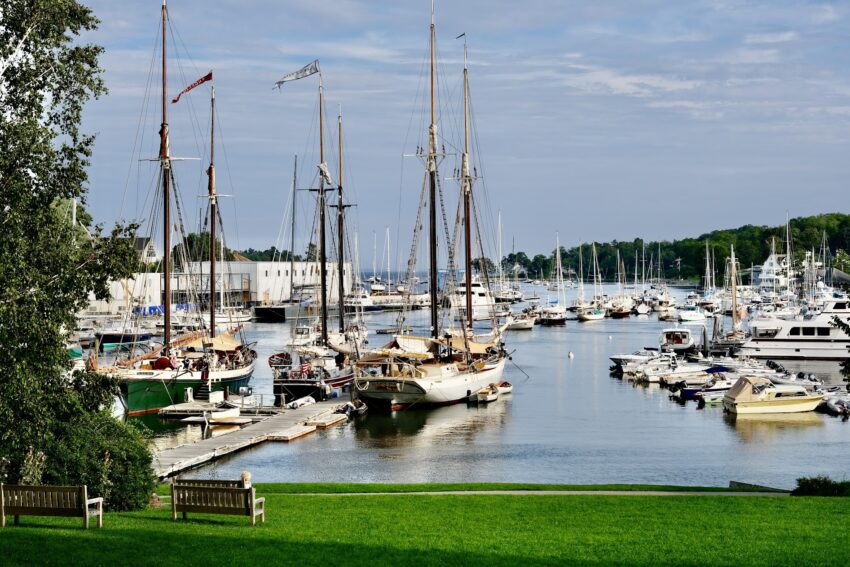 Ships in the harbor in Camden.

A Bit of Camden History

Five hundred years before Columbus discovered America, it is thought that the Vikings first explored the Maine Coast. The Penobscot indigenous people lived in the area for thousands of years. They called it Megunticook, meaning “great swells of the sea,” a reference to the silhouette of the Camden Hills. 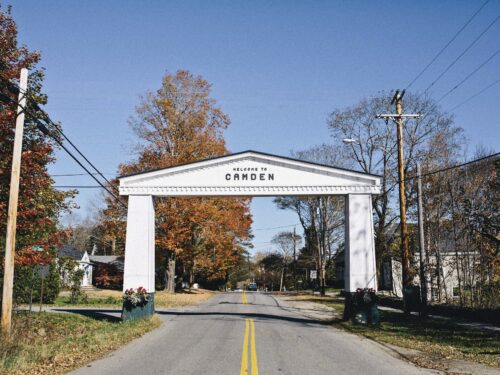 At the Penobscot Marine Museum in Searsport, I learned that in 1605 English Captain George Waymouth explored Midcoastal Maine on his ship, the “Archangel.”

He penned a detailed account of his observations, later published in England from his journal. These are possibly the mountains mentioned in his personal log describing the terrain and Camden Hills as “the high mountains of Penobscot, against whose feet doth beat the sea.”

Settlers arrived as early as 1768 in the wilderness that is now Camden. It was incorporated in 1791, named after Charles Pratt, 1st Earl Camden, a member of British Parliament and sympathetic to the Americans.

Ships and Shipbuilding in Camden

A sawmill was set up to make ship’s masts on the Megunticook River in the same spot where the waterfall cascades down to the harbor today. Two iron foundries used the waterpower of the river to forge anchors and fittings. 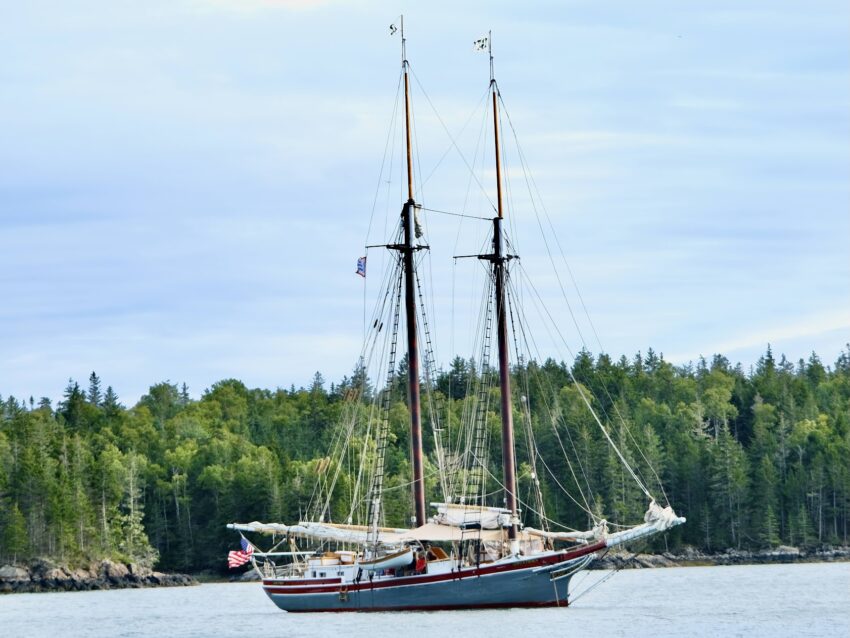 One of the many elegant schooners that grace the Camden Harbor.

In 1792, the first ships were built in a shipyard that stretched from Chestnut Street all the way to the harbor. Camden had built a reputation for producing fine wooden ships that sailed all over the world delivering lumber and cargo.

According to the Penobscot Marine Museum, by the mid-1800s, three-and four-masted schooners were being built, the builders and owners thinking bigger was better. In 1900 Camden built the first six-masted schooner in the world. 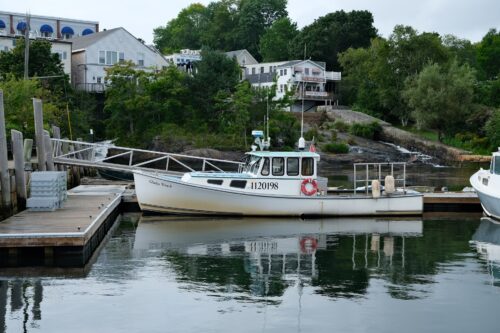 In November of 1892, a fire burned the business district to the ground. Camden businessmen made a tremendous investment in the town, building the Masonic Temple (Now the Lord Camden Inn), Camden Opera House, and Bok outdoor amphitheater.

The benefactors’ contributions to the community-funded libraries, public parks, and monuments, have added to its appeal and charm.

“All I could see from where I stood Was three long mountains and a wood; I turned and looked the other way, And saw three islands in a bay.” 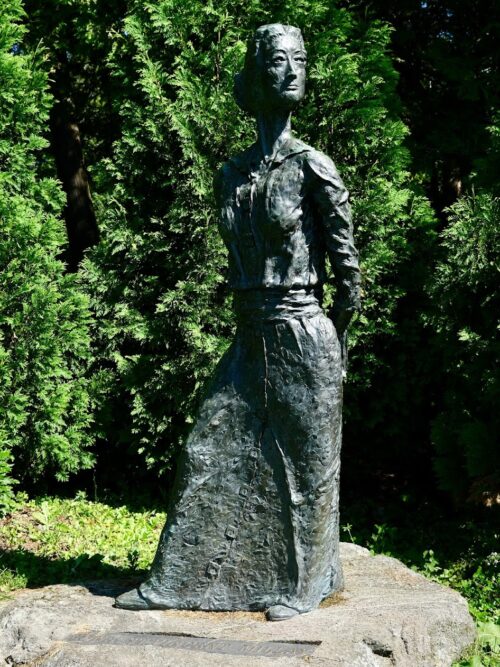 Penobscot Bay is Maine’s largest bay. At approximately 30 miles long and 30 miles wide, it envelops hundreds of islands and famous lighthouses. It is considered one of the most picturesque shorelines along the Atlantic seaboard. The view has inspired countless writings and works of art, including Edna St. Vincent Millay’s poem ‘Renascence.’

I was considerably older than young Edna was when my husband and I hiked the 1.4-mile Mount Battie Trail in Camden Hills State Park. Making our way over rolling hills and past towering pine trees, we gazed out over the shimmering surface of Camden Harbor.

From the Mount Battie lookout, the vista that poet Edna described spread out before us; the three rounded mountains in the distance and three islands sparkling like gems in the bay.

It was hard to wrap my head around the fact that I was standing in the same spot, experiencing the same timeless beauty as she did more than 100 years ago. 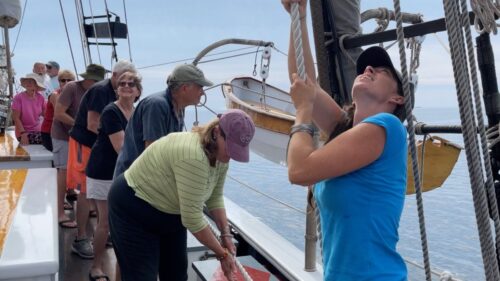 Hanging the sails on the schooner in Camden.

Windjammer Capital of the World

At the Penobscot Marine Museum, I learned that more wooden sailing vessels were built in Maine in the 19th century than in any other state.

When the steamship came along, it seemed as if the sailing ships had lost their place in the nautical world.

Camden’s own Frank Swift thought otherwise. He started a small business called Maine Windjammer Cruises that still exists today, offering sailing expeditions to young and old. The Camden Windjammer Festival happens the last weekend of the summer, an annual celebration of Camden’s marine heritage and tradition, the largest gathering of windjammers in the northeast. 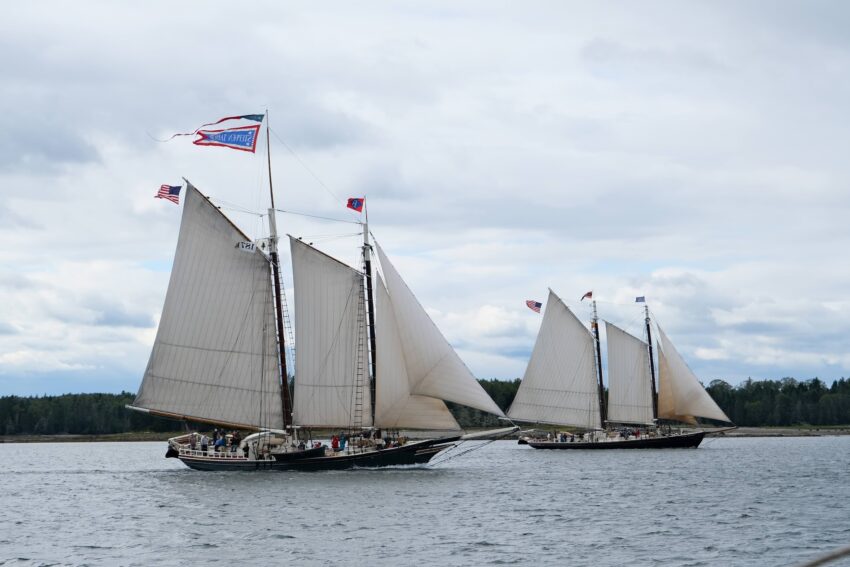 Stephen Taber and the J&E Riggin under full sail in a sporty romp down the bay in Camden. Sharon Kurtz photos.

Sailing on the Lewis R. French

Built by the French brothers and named for their father, the Lewis R. French was launched in April 1871 in Christmas Cove, Maine. A National Historic Landmark, it is America’s oldest merchant sailing ship. 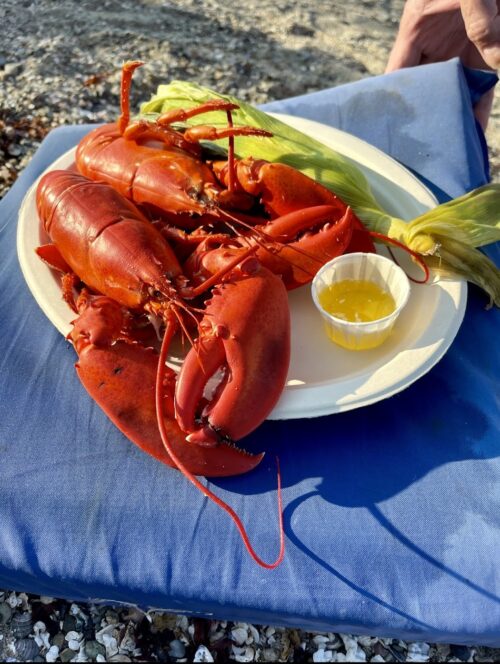 The beachside lobster bakes are just one delicious reason to come to Camden and sail a windjammer!

She carried freight until 1973; cargo included bricks, lumber, fish, and even Christmas trees. She then spent three years being rebuilt with the Windjammer passenger trade in mind.

The French has no inboard engine. She relies on wind power, with four lower sails and two topsails to propel her. She gets an assist from a small yawl boat to leave and enter the harbor.

The sails are raised and lowered by hand, and the anchor is manually raised each morning using people power with the help of a creaky windlass.

She operates much as she would have when she was built in 1871. Captains Garth Wells and his wife, Jenny Tobin, have owned and operated the French since 2004.

“We see ourselves as the caretakers of her for the next 25 years, not as the owners,” says Garth. “We are lucky to be able to do something that we love, a job that includes sailing a traditional schooner on the Maine coast and getting to share the whole experience with our guests.”

My husband and I got to sail on the Lewis R. French in the waning days of the summer season. We swapped out our plugged-in life for five days of pure sail and salty air.

Gourmet fare prepared in a wood-fired stove in the postage-stamp-sized galley below deck was nothing short of a miracle. A traditional lobster bake is a highlight of every Maine Windjammer experience.

Each day is an adventure where you can truly get away. 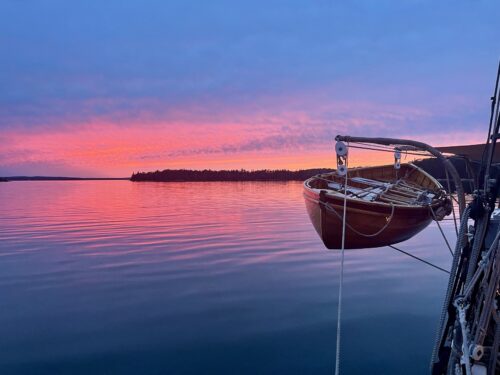 Sunsets are Dramatic from the deck of the Lewis R. French in Penobscot Bay

Sailor for the Day

Along with four crew members were 20 passengers, a mix of newbies and veterans returning for their umpteenth cruise. We could be as hands-on or as lazy as we wanted to be.

I loved helping to hoist the sails and taking a turn at the helm under the watchful eye of Captain Garth. There is absolutely no better way to experience sailing and the coast of Maine.

I was often the first on deck, tiptoeing as silently as I could manage. I wanted to glimpse the first light illuminating the horizon at the day’s dawning.

Like magic, the coffee pot and warm scones or blueberry muffins appeared on deck from the galley—much before the breakfast bell, as if just for me. 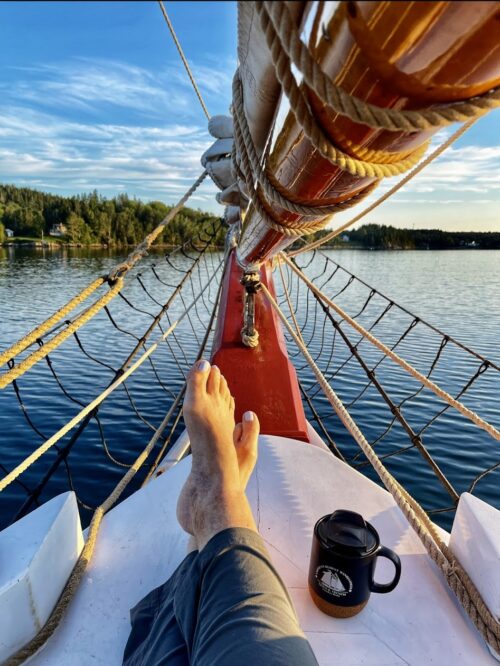 Morning perch on the boat.

My favorite perch was in the bow of the boat amidst the lines and rigging, as I eagerly watched for dolphins and seals frolicking in the sea and egrets and eagles swooping down from the shore pines.

It’s those little details that make up the days and nights of living life aboard a ship, with only the wind and the whims of the captain to chart the course of an incredible experience sailing off coastal Maine.

Sunsets on a Historic Schooner

Sunsets are spectacular from the deck of a Maine schooner. The cloud-filled sky often morphed from sherbet shades of pink and apricot to lavender in the blink of an eye — the collapsing wobbling orange ball slowly simmering down the horizon.

The most dramatic display was often after sunset when the brilliant twilight fuchsia afterglow collided with the night sky. The whole landscape felt like a theater screen straight from a movie, too perfect to be real, a collectively shared end to a perfect day.

For things to do, lodging, and dining options in Camden, click here. There are many guesthouses and small Camden Maine hotels to choose from, plus dozens and dozens of Airbnbs along the popular coast. 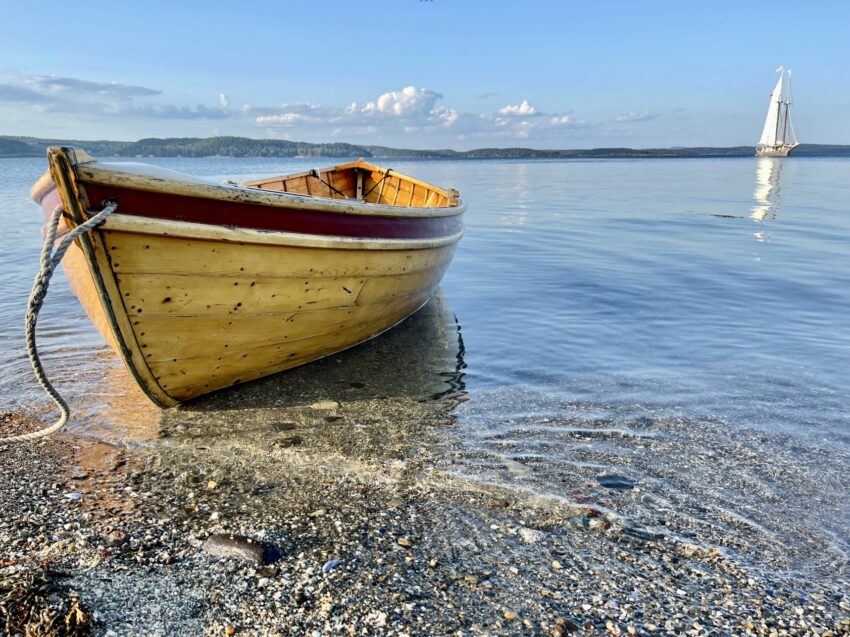 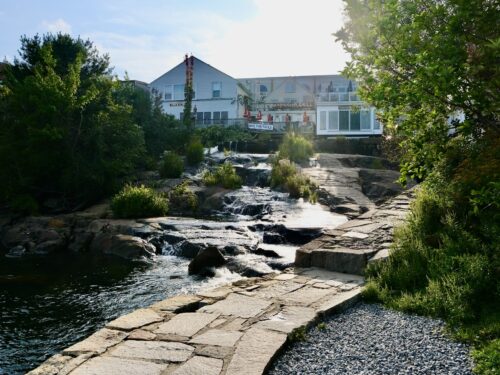 The Megunticook River waterfall is an iconic part of downtown Camden—cascading into the harbor.

Everything from a renovated nineteenth-century historic schooner to a boat built in 1980, modeled after a yesteryear vessel, sailing out of Camden and Rockport harbors.

There is no place else in the country where so many tall ships are hard at work.

The author’s cruise on the Lewis R. French was sponsored by the Maine Windjammer Association, but the opinions are her own.

Sharon Kurtz is a freelance writer who shares her love for travel and food by exploring unique customs, cultures, and flavors at home and around the Globe. While Dallas, Texas, is home with her husband and three spoiled dogs, her carry-on is always packed, ready for the next adventure. Catch up with her on her website and Instagram.