The True Treasures of Breckenridge, Colorado 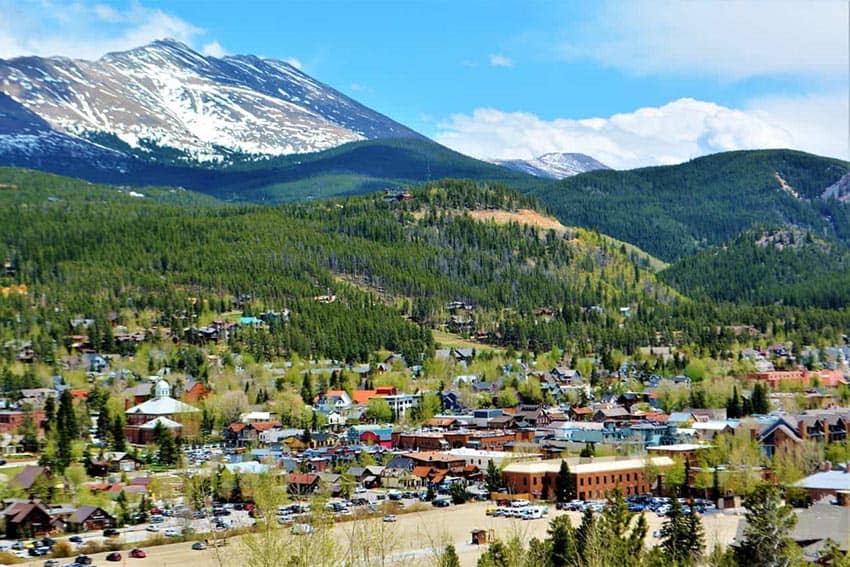 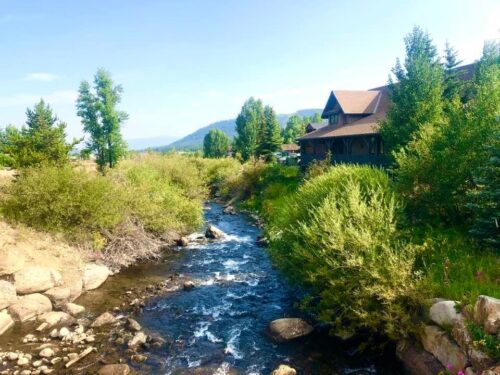 Though Breckenridge, Colorado is renowned for its fabulous ski slopes, it didn’t exactly start out that way.

Rather, it began with… “Gold!” That spectacular cry was heard around the world in 1848 when this precious metal was first discovered in California’s Sutter Mill. It didn’t take long for the news to spread. Prospectors from all over the globe headed West in hopes of striking it rich.

Colorado also played a huge role in America’s gold mining saga. In 1859, a group of settlers discovered flecks of gold alongside the Blue River in Breckenridge. In no time, The Pike’s Peak Gold Rush was in full bloom as thousands of prospectors and other tradesmen flooded the area seeking riches.

But it wasn’t just gold that prospectors found in these richly-veined valleys and mountains. They also discovered silver, lead, and zinc. And all these treasures discovered in one of the most mineral-rich states in the U.S. fueled even more growth and countless business ventures.

To understand the uniquely impressive Breckenridge of today, it’s important to understand its history – where and how it all began. This is why I needed to delve deeper into the town’s storied past. 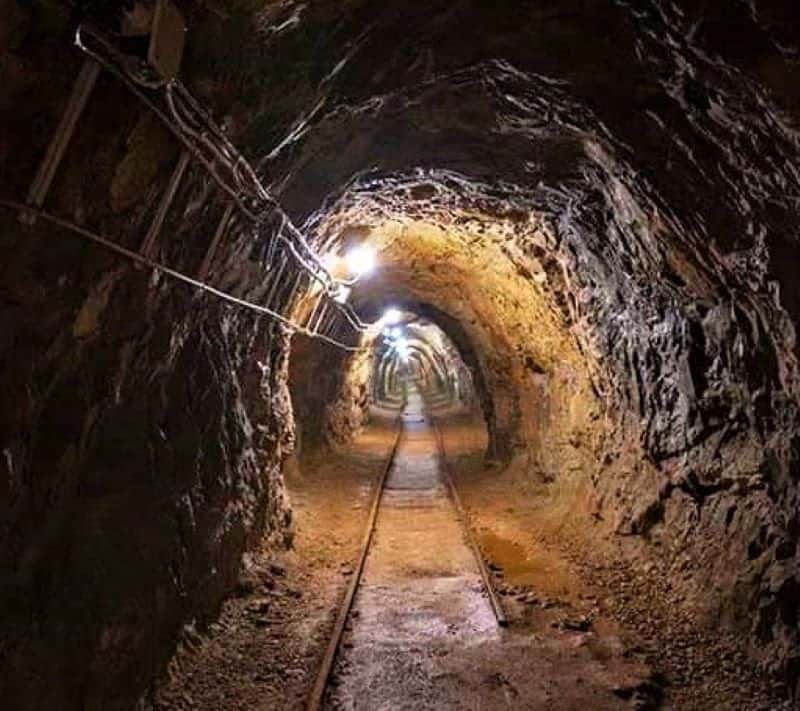 Heading into the tunnels of Country Boy Mine.

Located in the renowned and picturesque French Gulch area where gold was discovered by a miner named French Pete in 1860, Country Boy Mine is an absolute “gem.”

Though there were several mines in the vicinity, Country Boy is one visitors can actually tour. It also happens to be one of Breckenridge’s top attractions.

After disembarking the free shuttle from the town’s Main Street, our group of girl travelers strolled up the hill toward Country Boy, one of Colorado Summit County’s oldest and most famous mines.

Authentic mining equipment is still scattered throughout the property. It once operated during the mine’s 100-year reign to harvest gold and silver along with the high-grade minerals lead and zinc which were sorely needed during WWI and II. 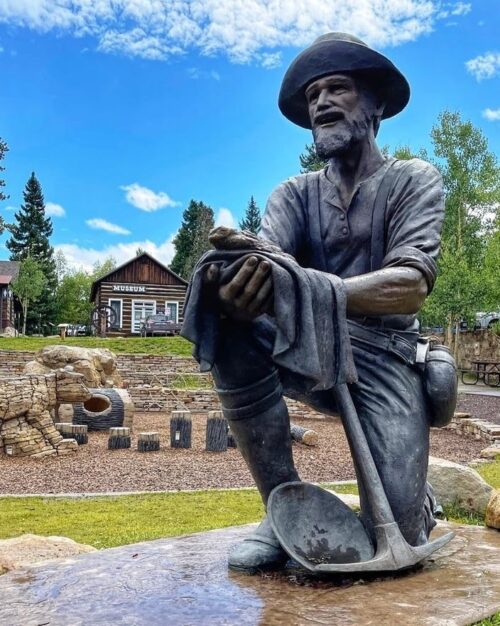 Tom’s Baby statue in the heart of Breckenridge.

Donning jackets, mining helmets, and flashlights, we accompanied our lantern-carrying guide descending 1,000-feet into the mine following in the footsteps of miners.

The tour was amazing and informative, but the highlight was when all lanterns and flashlights were shut off, and we were in sheer, utter darkness. The guide then lit a candle, representative of the only light these miners worked with on their long shifts in the mine.

One of the Largest Gold Nuggets

It was fascinating to learn that “Tom’s Baby,” one of the largest pieces of gold ever found in Colorado was discovered in 1887 by miners at the Gold Flake Mine in Breckenridge.

It got its unique name because finder, Tom Groves, would carry the nearly 250 ounces of gold, the size of a human head, around town like a baby.

Like many other mining towns, Breckenridge’s mines eventually wound down and ceased operation after WWII. As a result, the population plummeted.

However, the town not only survived, it soon thrived due to the blessings of Mother Nature and the creative resilience of entrepreneurs who felt the siren’s call of these spectacular mountains.

The idea to build a ski resort in Breckenridge began during the late 1950s when Bill Rounds of the Porter and Rounds Lumber Company became interested in bringing skiing to the valley.  Peak 8, directly west of the town and officially the highest point, was selected for the site of the ski resort.

From the top of Peak 8, at nearly 13,000-feet, skiers would enjoy a few double diamond slopes in a 3,400-foot descent. The development of this resort and its slopes would make Breckenridge the highest village and highest ski resort in Summit County, Colorado. 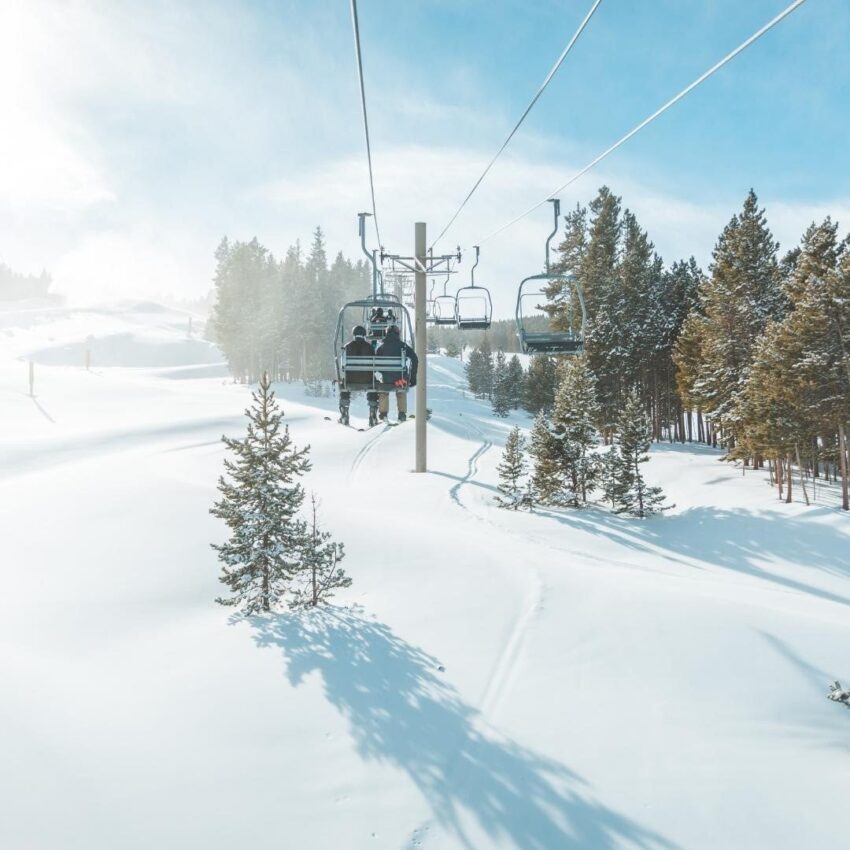 With the population that had dwindled to under 400, skiing saved the day!

Transportation improvements fueled a new Breckenridge “rush.”  The Eisenhower Tunnel on Interstate 70 was completed in 1973, reducing the drive time from Denver to Breckenridge down to an hour and a half. Breckenridge was once again “on the map.” 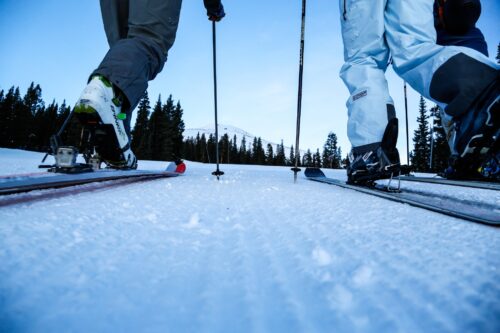 I recall a favorite aunt and uncle of mine who are avid skiers talking about this “Colorado ski town we’re so in love with.” Yep, that was Breckenridge, and they weren’t alone in their accolades as the town was attracting ski lovers in droves.

The rest is history. Today, Breckenridge remains one of Colorado’s favorite ski destinations, sporting five peaks for skiing and snowboarding. Peaks 6 through 10 offer a wide variety of trails for skiers and riders of all levels.

Ski season typically runs from November to May (depending on weather conditions) making this an ideal place to hit the powder and take in those spectacular, breathtaking Rocky Mountain vistas Breckenridge is known for.

Welcome Center Museum is a Must-Do

For a wonderful, in-depth look at Breckenridge history from the gold strike through the boom to bust years followed by the growth of the ski industry, the Breckenridge Welcome Center Museum is one of the first places visitors should head.

The theater show, videos, and photographs are amazing. The best part is the museum is free of charge with an optional $5 donation. For a small museum, it’s filled with an incredible amount of fascinating information and displays.

A Word About the Altitude
The locals will stress that to avoid dehydration when visiting Breckenridge or getting altitude sickness (severe headache and nausea) that could require medical attention, it’s important to stay hydrated.

Breckenridge’s climate is drier than most visitors are used to and because of its location in Colorado’s high country, it’s vitally important to drink lots of water. I even start drinking extra water 24 hours before my visit. Also, make certain to have plenty of water with you when hiking, biking, or enjoying other outdoor activities. 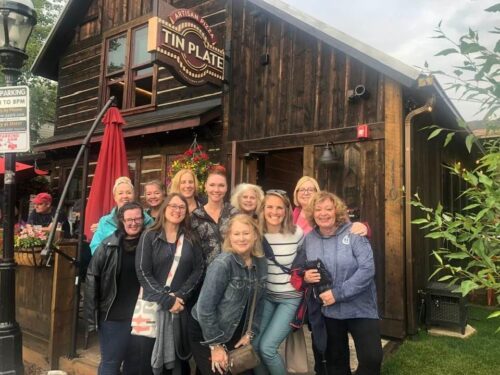 Our wonderful group of gal travelers in Breckenridge.

Breckenridge has another amazing aspect to its personality: artistic creativity. A whole lot of it.

The love of the arts is rooted in an authentic spirit of adventure that’s been a part of Breckenridge’s history since the Gold Rush days. The people here exhibit a special kind of warmth and welcoming.

The town has attracted poets, painters, photographers, and artists of all types who journeyed to Breckenridge finding it a place where they could truly blossom. They are as unique as the pieces of art and literature they create.

We felt this on our first trip to Breckenridge over 15 years ago, and thankfully, it hasn’t changed a bit with each return visit.

The Historic Town of Breckenridge

Nineteenth-century Victorian buildings have many stories to tell. Old West saloons still contain original bars and vintage relics from the gold mining days. This mountain hamlet is filled with a myriad of eclectic art shops. 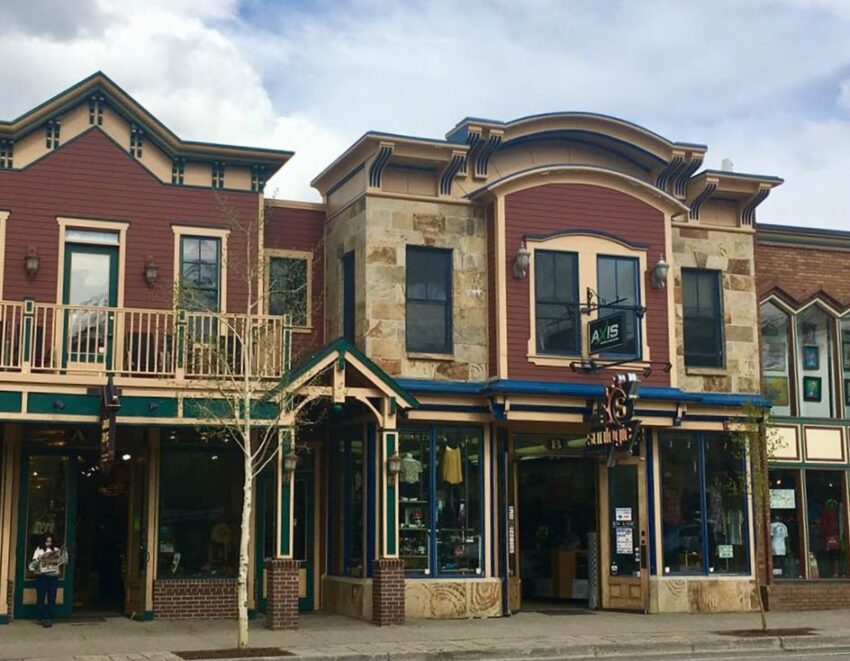 Yes, the art scene is alive, vibrant, and growing. Each time we visit, it seems there are more places to experience local arts and crafts and enjoy the town’s creative treasures. 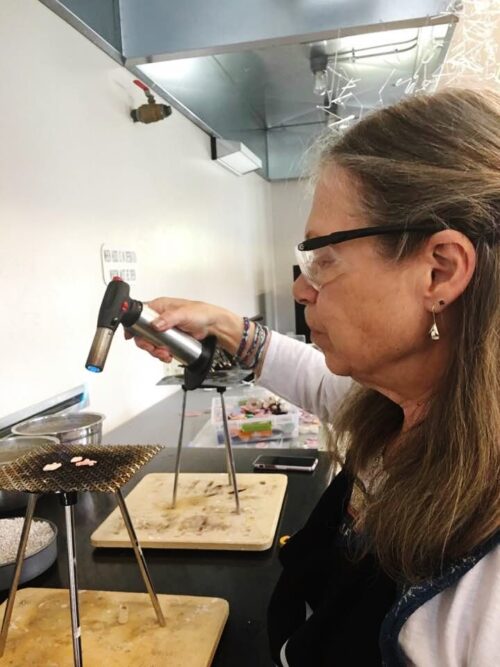 Learning about metalsmithing at the Hot Shop studio.

Watching artists in residence working in their studios and galleries is a joy. The paintings are spectacular, but we’re amazed at the artistry in jewelry, pottery, glassworks, textiles, and metalsmithing found here. Artistic expression is truly a passion in Breckenridge.

The district’s core attraction is a lively art campus housing workshops within historic renovated structures. We picked up a map at the Visitor’s Center guiding us to all these lovely venues.

For those who want to do more than browse and admire the creativity of Breckenridge’s talented artisans, the district also offers hands-on art and craft classes. I have a beautiful metal pendant I designed and created at the Hot Shop studio located in one of Breckenridge’s historic buildings.

Throughout the year, art festivals are bringing more and more visitors to Breckenridge. These nationally-ranked fine art events are increasingly popular. It’s not hard to understand why as it’s the perfect combination.

It’s a town filled with charm and an atmosphere whose natural beauty couples perfectly with the artistic expressions and crafts by some of the Rocky Mountain’s most talented artisans. 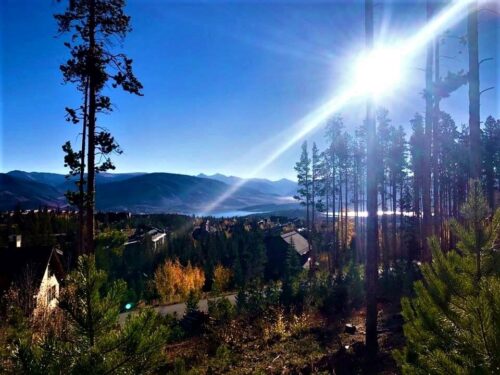 Each season in Breckenridge brings its own unique, breathtaking beauty. Surrounded by the majesty of the Rockies, it’s a year-round outdoor lovers’ nirvana sporting lots of sunshine and a fresh, clean-air climate.

Locals and visitors here share a passion for outdoor adventure. It’s one of the main reasons we love coming to this mountain paradise.

Azure lakes, cascading streams, colorful quaking aspens, stunning scenic overlooks, and wilderness beauty as far as the eye can see. These are all part of the gifts Mother Nature has bestowed upon Breckenridge.

At an elevation of 11,482 feet, the Boreas Pass scenery is so impressive, it’s almost hard to describe. It’s a must-do unforgettable experience. 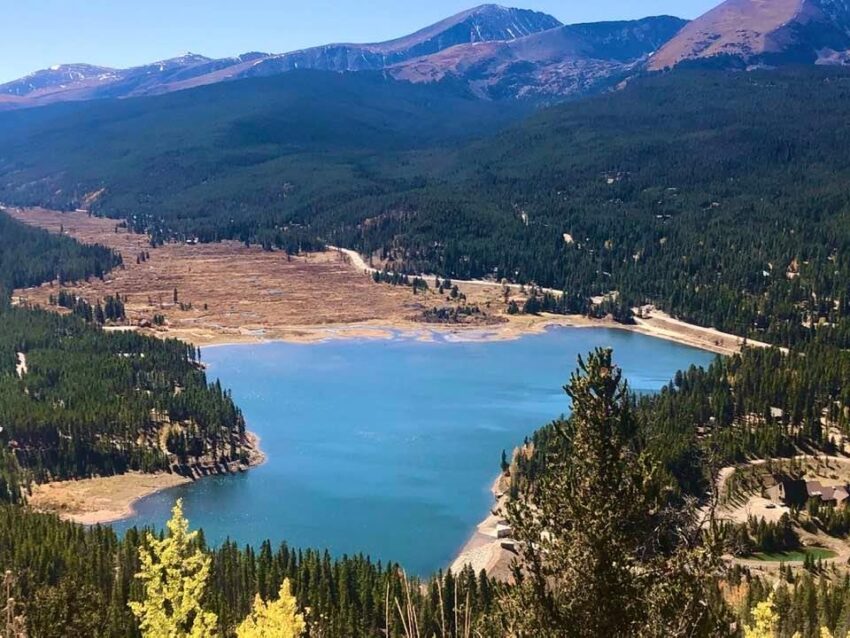 Once arriving at the pass, visitors can hike, bike, and camp in the surrounding area. But this I guarantee: the sweeping panoramic vistas will absolutely blow your mind. Don’t forget your camera, as photo opportunities here are endless.

One of our favorite ways to explore this picturesque region is by hiking. Breckenridge offers epic trails for all levels ranging from gentle walks to challenging the area’s tallest peaks.

One of our favorites is Sawmill Reservoir. This is an easy to moderate 1.3-mile loop hike, not too difficult or too long distance-wise, and perfect for those getting acclimated to the high elevation and thin-Colorado air. But the views are lovely. 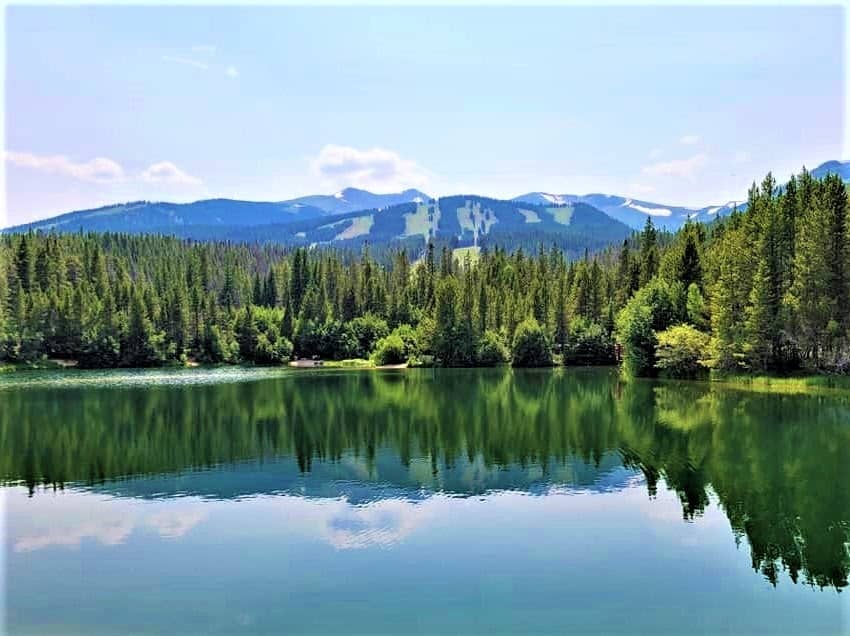 The trail is situated around a scenic lake sitting nearly 10,000-feet above sea level and surrounded by the verdant White River National Forest. 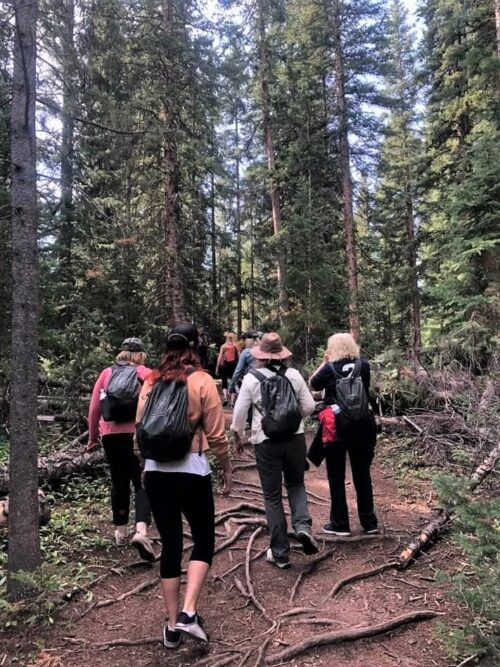 The gals on a Breckenridge hike.

We so appreciated the stunning overlooks, shady pines, and colorful seasonal wildflowers. I highly recommend this hike as a starting point for Breckenridge’s adventures before moving on to more challenging treks.

From its mining days and its rebirth as a ski town to the multifaceted Breckenridge we know today, we can say for certain that this region has certainly been blessed with many gifts.

Renowned explorer and naturalist John Muir said, “Thousands of nerve-shaken, over-civilized people are finding that going to the mountains is going home; that wilderness is a necessity.”

I can’t imagine a more appropriate quote after the last couple of years we’ve experienced the pandemic. Muir’s words are timeless. And how thankful we’re still able to find those incredible places that nourish the soul and mend the spirit.

This is Breckenridge. A town filled with endless treasures.