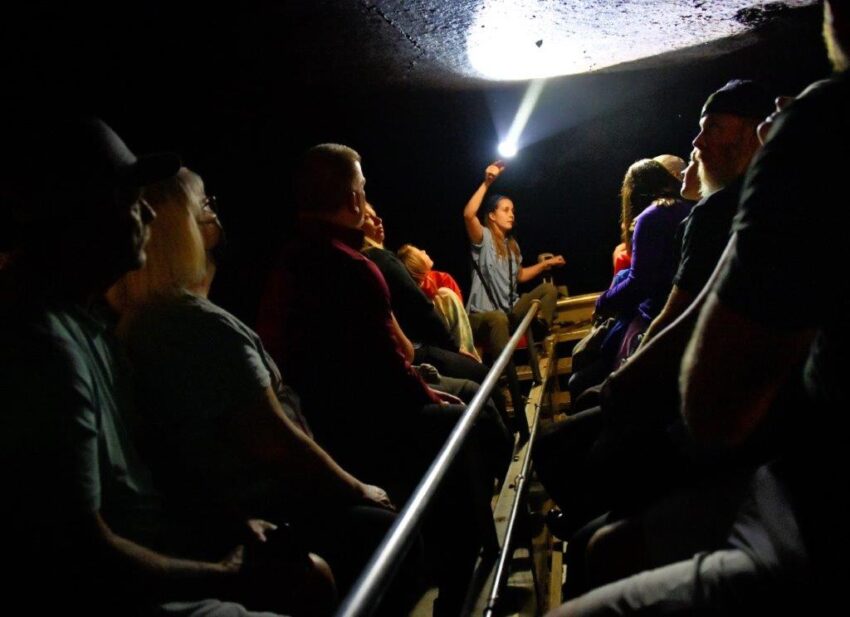 Bowling Green Kentucky was settled in 1798 by the pioneers who conquered the west. It is a city of 70,000 located an hour north of Nashville and two hours south of Louisville.

Our two-night stay had us do unique, fun things both above and below the ground. Is Bowling Green in Ohio or Kentucky? The answer is both. 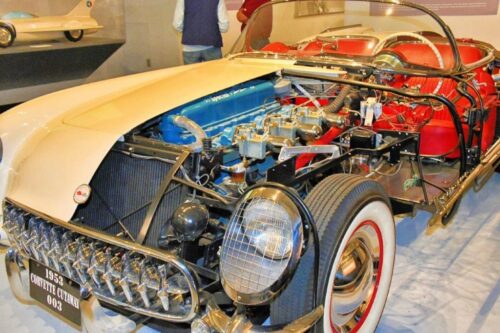 Bowling Green, since 1981, has been producing what many call “America’s sports car.” The National Corvette Museum opened in 1994 just a quarter-mile from the factory.

The museum sits in a 115,000 square foot building. It features 80 Corvettes (of all years including concepts) and almost any memorabilia you can think of affiliated with the iconic brand.

It has a restoration shop, nostalgia exhibit, kid’s zone, and a nursery where new owners can pick up their cars in the lobby.

An unusual exhibit is the Skydome. This holds the Corvette Hall of Fame and many one-of-a-kind Corvettes including the only

1983 model and a Vette with a V-12 engine.  The attention-getter here are several destroyed Corvettes. 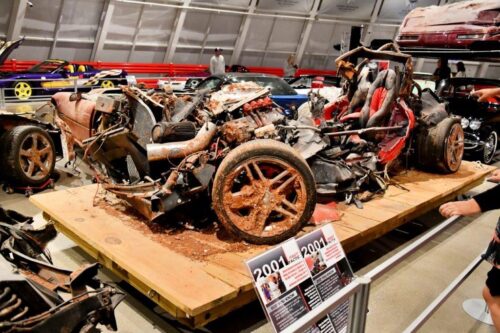 Victim of the cave-in at Corvette Museum in Bowling Green Kentucky.

This included the one-millionth Corvette that was restored. The other Vettes look as if they were bombed.

This museum is not just about the car but the Corvette lifestyle. Their large gift shop can make any fan happy. Adjacent, and highly recommended for lunch, is the Stingray Grill.

If you are new to Kentucky, try the state sandwich by ordering the Kentucky Hot Brown Turkey. This open sandwich of grilled turkey, béchamel sauce, tomato, and bourbon-glazed bacon is delicious.   website

After seeing all things Corvette for about 90 minutes it was time to buckle up in one. If you ever want to get an incredible adrenaline rush as well as test yourself, visit the NCM Motorsports Park next door.

NCM Motorsports is a racecourse made up of 23 turns in 3.2 miles. Driving here is not about the top speed you achieved, but seeing how much you can push yourself in the turns at the highest speed.

While my top speed was only 121 MPH on the straight, this was the least exciting part of my four laps. It also gave me time to catch a few extra breaths before screaming back into turn one.

I opted for the $299 four-lap event in a new C8 mid-engine Corvette. At the safety briefing, the instructor told me to stay three car lengths behind him. He said if I get closer he goes faster, if I go slower he slows. The idea here is to follow him because he knows the course. It would take me many laps of practice to know where to set up for the turns.

Driving here was a thrill on steroids. I went so fast in the turns that my wife could not video a lap due to her holding on and at times pleading for me to slow down (I didn’t!)

I was very pleased with my results as we caught up with the group in front of us that started half a lap ahead of us. On the track, I learned how the car outperformed me versus the other way around. I also enjoyed the way this new mid-engine Corvette performed.

For details on taking your own car on the track or their different Corvette programs: Motorsports Park 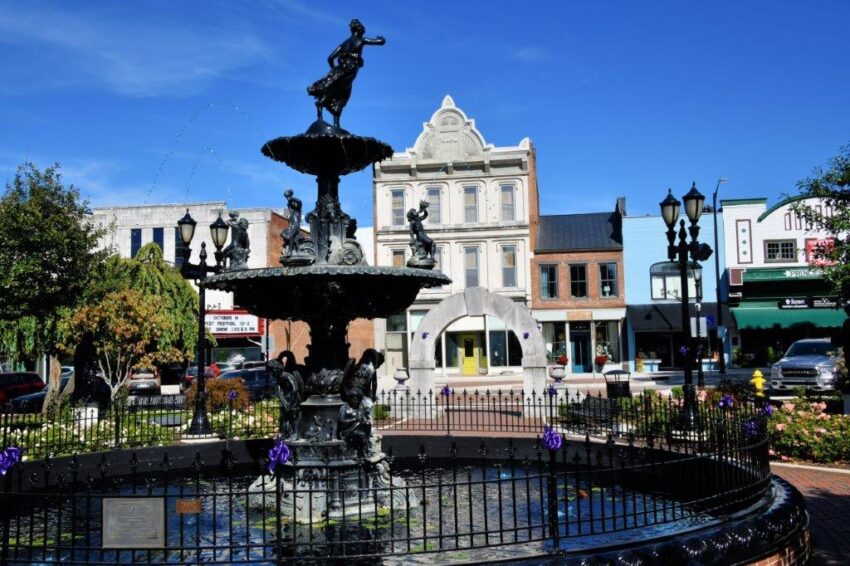 Fountain Square in the center of the historic downtown district 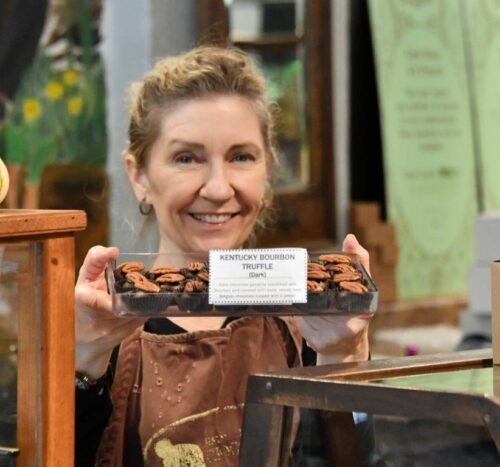 Bowling Green has an appealing historic downtown. The two-acre Fountain Square Park is surrounded by two and three-storied historic brick buildings with the oldest dating to 1837.

A large fountain dominates the center of the square. In the park, you will find statues, benches, and well-kept greenery. It makes the perfect place for a little scenic quiet time.

Two shops with a lot of charm and good taste include the Golden Farley Men’s Wear and Mary Jane’s Chocolates. 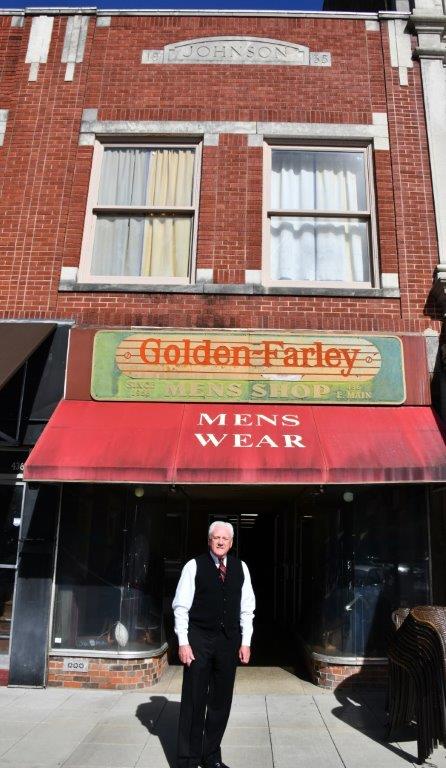 Larry Stewart, neatly dressed in front of his men’s shop

Proprietor Larry Stewart, of Golden Farley, has been there since 1958 and his store is a sharp-looking throwback showing class and style. He is always smartly dressed and ready to show you his clothes.

Mary Jane cheerfully explained her house-made chocolates. Being in Kentucky she had me try her creamy and smooth bourbon-infused truffle. Meeting people like her while traveling is part of the fun!

Located on the square showing a bright marque is the Capitol Arts Center that had its start as a vaudeville house in the 1890s. This historic theatre is still active with shows, concerts, events, and Friday night movies.

A River Ride Under Bowling Green

Bowling Green has the only cave boat tour in Kentucky. The Lost River Cave has an interesting history. It was used by Native Americans, civil war soldiers, a Jesse James hideout and a natural “cool” nightclub from the 1930s to the 1950s. It was also a dumping ground until it was cleaned up and turned into an attraction.

Tours last about an hour starting with a 20-minute history and geologic walk on the river stopping at the blue hole. At the large cave entrance, you can see where catered affairs take place before boarding a long metal skiff with an electric motor. 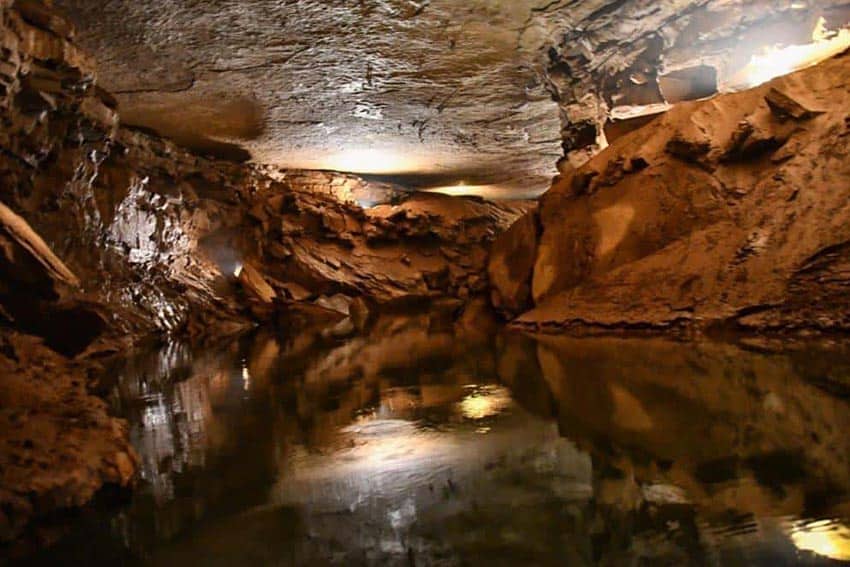 After boarding, the guide slowly motors on the calm water for a 25 minute round trip ride. Visitors go through both high and very low ceiling chambers until it reaches a man-made dam that keeps the water about four feet. There you can look further into the next chamber where the river continues. During the ride, the guide talks about the formation and features of the cave.   website

Trains and History in Bowling Green 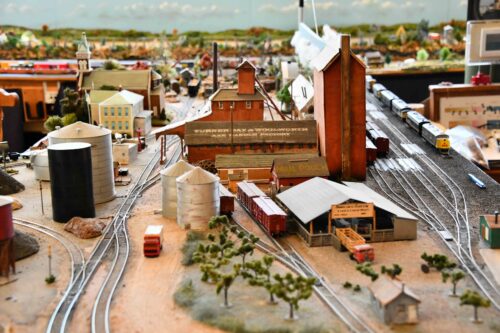 Model trains and full-size cars are among the exhibits

Bowling Green’s Historic Railpark and Train Museum is housed in the preserved and historic L & N Depot building built in 1925.

It has plenty of artifacts, an impressive model train set up, and old railcars to make any train fan happy. What makes this museum special is the guided tour describing the history and the people and the segregation that went on it the railroad.

In the galley, sleeper, and postal car, the guide pointed out the positions of the staff and the hard work done at each station. She explained that all porters were African American and sadly, George Pullman required them to be called George which the porters hated.

Our guide explained how the porters would sleep on the floor of the dining car or on a stool between the cars so they can be called upon. Porters were on call at night to get a ladder for people on the top bunk that needed to go the bathroom. They would work 400 hours a month (of a 730 hour month) Historic Railpark & Train Museum: 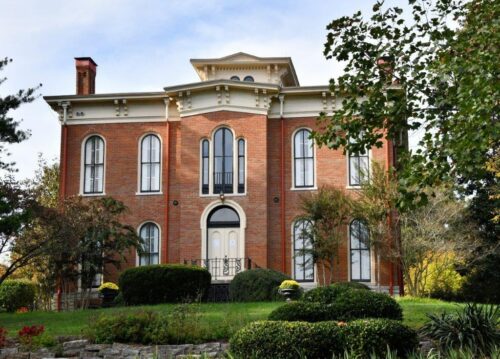 If your interest is in historic homes in Bowling Green, take a tour of Hobson House. This restored classic Italianate home is listed in the National Register of Historic Places Its construction started in the 1850s. It was completed in 1872 because of a work stoppage during the Civil War. 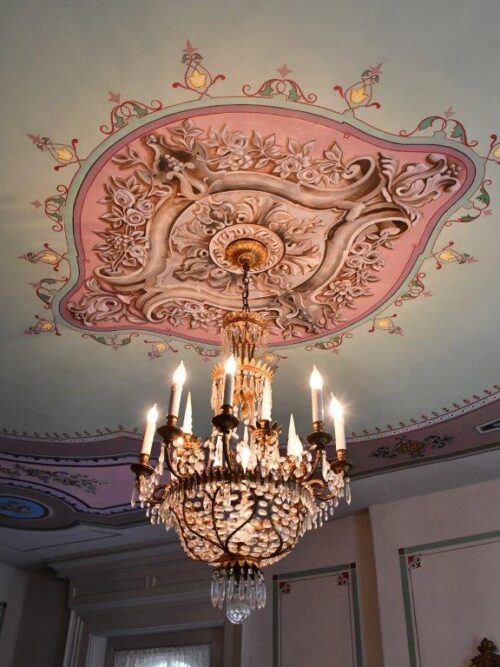 Ornate ceilings and fixtures can be seen about the house

Our guide pointed out the beautiful patterns and colors on the walls and especially the ceilings. She also gave us the interesting history of the family and the house.

We learned it was spared destruction during the war by opposing officers and a family connection between them. (Kentucky was a border state)

The Hobson House is furnished with original and period pieces. At the top is a cupola, which when the windows are opened creates a vacuum pulling all the hot air from the house. Visitors may climb to the top for a view of the surrounding grounds. 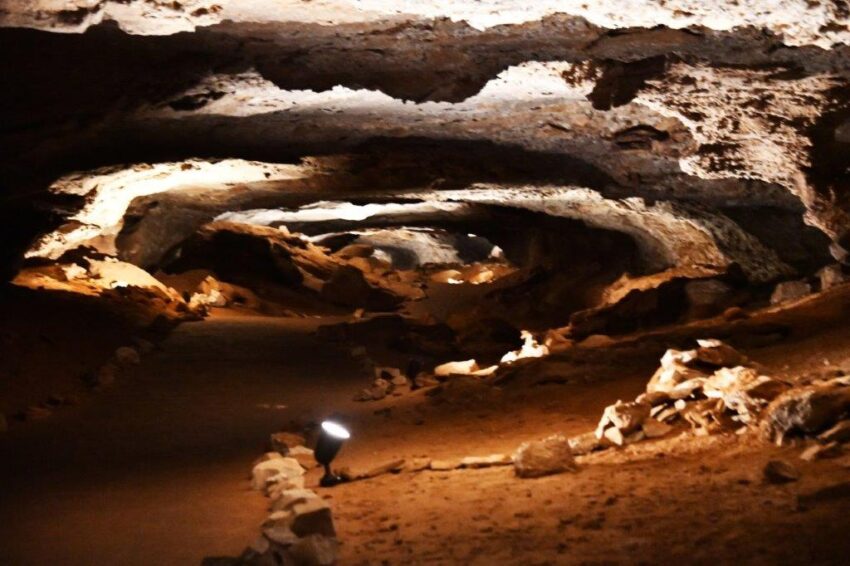 One of the most visited places in this part of Kentucky is Mammoth Cave National Park located 30 miles from Bowling Green. This is the world’s largest mapped cave system in the world. So far, 420 miles have been explored here. It is estimated there could be hundreds of miles yet to be mapped. 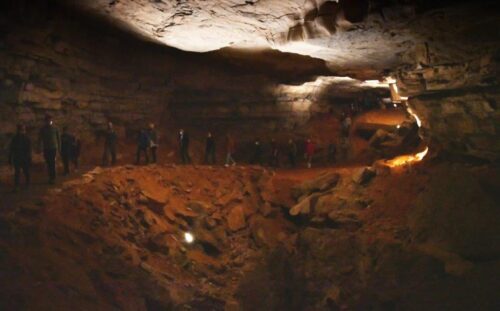 The only way to see the cave is with ranger-led tours. Depending on the season, the park service can offer up to 15 different tours. These can be as short as .75 miles to as long as four miles taking 90 minutes to four hours.

A complete description of each tour is on their website. You also need to book your tour in advance or you will be stuck only to see their detailed museum at the welcome center.

During our day here we wanted to get the most of the cave. This had us take the Grand Avenue Tour. The tour is described as four miles in four hours with 1313 steps and rated strenuous.

Based on my past experiences with the National Park Service overrating their trails, we booked this one and had no problems.

If you are in average condition, can walk steps, and don’t get winded easily, take this tour. Our group had mostly average-looking people where many people needed to catch their breath a bit at the rest stops after the steps. The tour has two restroom stops. 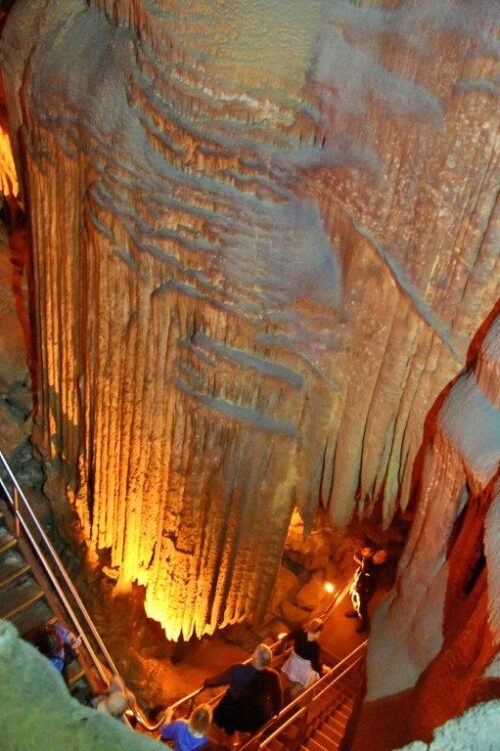 Passing “Niagara Falls” at the end of the tour

Our tour had two rangers for a group of 50. A bus took us to the cave entrance and the steps down. The walk underground is an excellent mix of entering different chambers that were tall, oblong, shallow and as well as narrow slot canyons.

The ranger keeps a good pace as the footing on the path is flat. After four hours we exited on the other side of the mountain.

The Creatures Inside the Cave

During the rest stops, the ranger explained the cave formations, how it was created, the few creatures inside it as well as the history of the early explorers.

As you go through the labyrinth of walkways, each chamber is unique. This tour also takes in some aspects of the shorter tours.

As photography is difficult in the cave due to low light with cell phones, I recommend spending time enjoying the adventure, rather than documenting it.

The gift shop has plenty of good postcards you can buy and scan later. website

Bowling Green is also a very good base for nearby attractions. This includes distillery and wineries, outlet malls, golf, Civil War sights, and other nice towns all within an easy scenic drive.

Mariah’s for lunch was conveniently located adjacent to the Bowling Green Ballpark, home of the Minor League Hot Rods. They have salads, burgers and sandwiches.

Montana Grille­   is a rustic-looking restaurant where you can see (and smell) the food that is being cooked over the wood-fired grill. We enjoyed our dinner of ribs and steak along with their signature cornbread. Watching the attentive servers interact with the open kitchen during the rush showed how well run this place is. 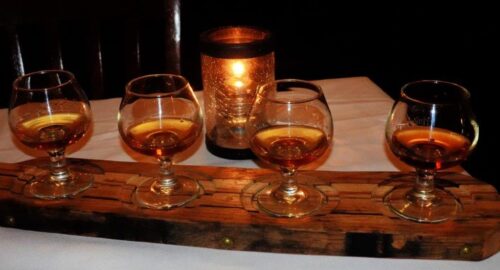 A bourbon flight at 440 Main

440 Main is directly in front of Fountain Square Park in old Bowling Green. This upscale place is a bit continental with leanings on southern and New Orleans-style food. Rather than order one of their craft cocktails, I was able to sample my first bourbon flight of four.

The hostess and server patiently worked through their large list of bourbons to pick ones a beginner may like. This was one of our best meals during our 2900 mile road trip. On weekends they have live music.

TownePlace Suites is off the main road getting into the city in a good location. It is ten minutes or less to anything you need to see in Bowling Green. They offer studios and one-bedroom suites, each complete with a kitchenette. The property has a BBQ along with picnic tables, a gym, and a swimming pool. The staff is attentive and breakfast is included. Hotel website

For complete information on everything Bowling Green: www.visitbgky.com